Multi-Partner Marriage: The Next Logical Step After Same-Sex Marriage 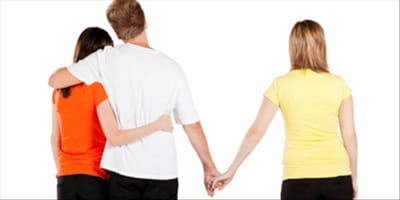 Multi-Partner Marriage: The Next Logical Step After Same-Sex Marriage

The Toronto District School Board, with the desire to create “Safe & Positive Space” in the schools under its jurisdiction, has printed and distributed posters for the benefits of students starting in grade school.

“Love has no gender,” proclaims one against a background of hearts, on which are an assortment of male and female stick figures. Some hearts contain a male and a female, some two females or two males. We expected as much. What we probably didn’t expect is that some of the hearts have threesomes: a male with two females, a female with two males.

“Two’s company; three’s a crowd,” we used to say. The Toronto District School Board wants to make it very clear to all school-age children that three is most certainly not a crowd. Love not only knows no gender, it apparently knows no number.

Once we remove the natural sexual complimentarity of one man and one woman from the notion of marriage and family, polygamy (a man with more than one wife), polyandry (a women with more than one husband), and polyamory (multiple men and women all married to each other) tumble out as naturally as same-sex marriage.

An article published last year in The Australian notes that polyamorists see the success of gays and lesbians as “a base on which they can build.” The article notes, “The agenda now is to seek recognition and the removal of prejudice against multiple-partner relationships, perhaps legislation to grant them civil unions and even legalised polyamorous marriage.”

And that ball is already rolling.

Though the Netherlands doesn’t consider it “marriage,” two brides and a common groom celebrated their civil union complete with wedding attire, a reception, and abundant media coverage in 2005.

She assumes that marriage and family (and gender, for that matter) are social constructions. Their forms are not permanent or in any sense binding from place to place or generation to generation. Morality evolves, marriage evolves, family evolves, and evolution is, by definition, progress. As G.K. Chesterton commented about his contemporaries, “They seem to imagine that they avoid the metaphysical doubt about mere change by assuming (it is not very clear why) that the change will always be for the better.”

The slide toward same-sex and multi-partner marriage in part reflects this unexamined belief that change is progress. But change can only be deemed “better” or “worse” based on some external and unchanging standard. Progress is meaningless in a relativistic world. Change is simply change and the most we can say about it is that we like it or dislike it.

If the best we can say about posters advertising polyamory to schoolchildren is that we don’t like polyamory, we have nothing to offer to the debate. And I suspect most people in the U.S. and Canada have nothing to offer. Instead we need understand the natural law arguments for marriage as the union of one man and one woman that are available not just to Christian believers, but to anyone willing to think the issue through.

Otherwise we’ll see how long it takes for those same posters to appear in our schools.