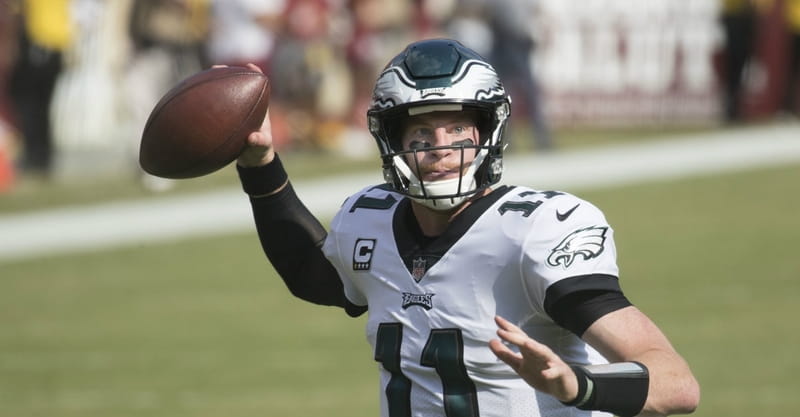 Carson Wentz, quarterback for the Philadelphia Eagles and an avid hunter, is familiar with camouflage. But whether on the football field or in his everyday life, his faith is evident. Recently urged by a twitter follower to remove one of two photos posted to wish his dog and hunting buddy a ‘Happy Birthday,’ Wentz commented, “Appreciate that, but offensive and controversial? Two of the main things I tweet about are Jesus and hunting. That’s what I’m passionate about and that won’t ever change! When you love something, you talk about it! Stay convicted about it and don’t worry what others think!”The photo in question pictured his dog with geese killed in a hunt.

ABC7 reported that Wentz replied in less than 20 minutes to the tweet, which said, “As a friend, I wanted to quickly highlight that a man in your influential position might cause (offense) through the posting of your first picture. I support its sentiment however the context and content of the pic could offend.”  A day later, Fox 29 reported that Wentz’s response had already been retweeted thousands of times and ‘likes’ were approaching 30,000.

Wentz tweets about his faith regularly, giving praise to God for the opportunities he’s been blessed with. Turning 25 just recently, he is well aware of the amount of success his life holds at such a young age. A lot of celebrities talk a good talk of faith, but not many successfully apply it in their lives as he does. His foundation, AO1 (Audience of One) was formed this past year in 2017.

The NFL quarterback, freshly injured to end a season laced with possible MVP candidacy,has not stopped to wallow in his losses. Walking in step with the tattoo on his arm, he continues to live for an “Audience of One.” That audience is Jesus. The Carson Wentz A01 Foundation’s mission is “to demonstrate the love of God by providing opportunities and support for the less fortunate and those in need.” The day after the “controversial” photo, a smiling Carson on crutches, in celebration of a concluding A01 fundraiser,appeared on twitter.

Wentz continues to executes the following sentiments of wisdom in regards to the platform of celebrity he has been given. Wentz told NBC Sports,"It's something I’m very passionate about. I realize I have a platform for more than just winning football games. I want to make a difference all over the country, all over the world.”