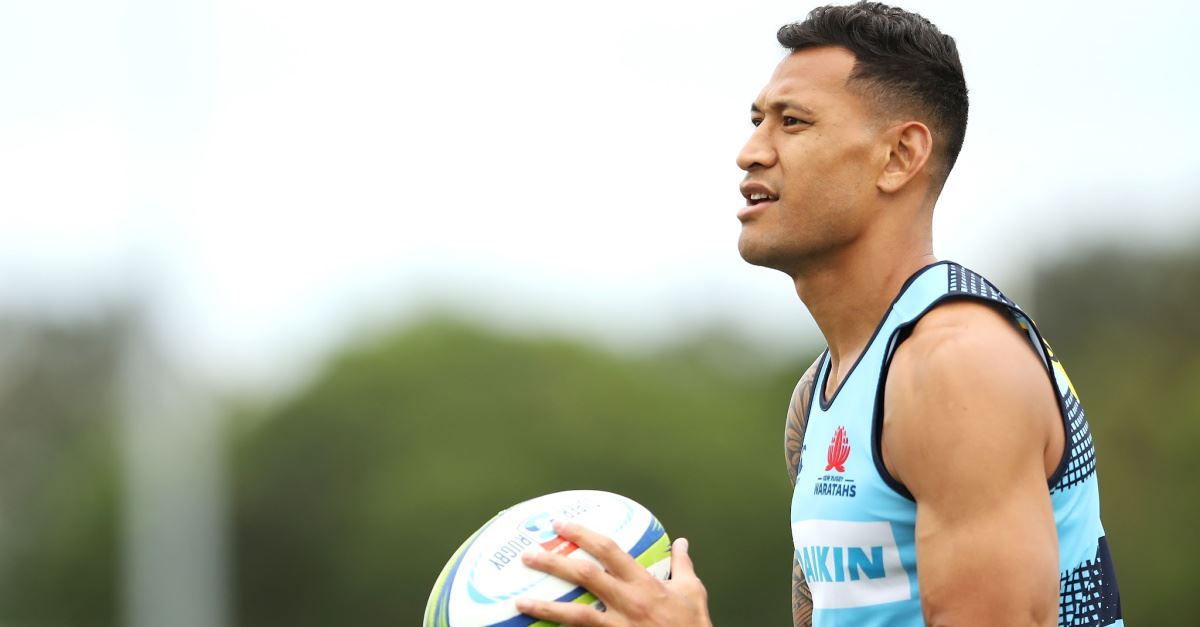 The Australian rugby star fired for speaking out against homosexuality on social media earlier this year said in a sermon Sunday that the devil is behind the push to expand transgender rights to children. He also urged Christians to take a stand for truth without fear of the repercussions.

“They are allowing young kids in primary school to be able to have the permission to change their gender if they want to by taking away the permission of their parents,” Israel Folau, 30, declared in a 21-minute sermon at Sydney’s Truth of Jesus Christ Church and posted on Facebook. “Now they are trying to take control as a government to make those decisions for young kids who are basically 16 years old or younger, they don't even know what they are doing.

“This is what the devil is trying to do, to instill into the government, into this world, into society, and it is slowly happening. If there’s ever a time to stand up for the Word of God, now is the time.”

As Christian Headlines previously reported, in May, Wallabies star Folau was terminated from a $4 million contract through 2022 with Rugby Australia for an April Instagram post in which he said “Hell awaits” for “drunks, homosexuals, adulterers, liars, fornicators, thieves, atheists, idolaters.”

Folau, Super Rugby’s all-time record try-scorer, was expected to represent the Wallabies at this year's World Cup in Japan. The Christian Post reported that the dismissal marks the first time an Australian athlete has been terminated for expressing their religious beliefs. The former rugby star also lost sponsorship deals with car manufacturer Land Rover and sportswear brand Asics, according to the BBC.

In April, Tasmania became the first Australian state to make it legally optional to list gender on birth certificates. The new law allows those 16 or older to apply to change their listed gender without the approval of their parents. The state of Western Australia is also discussing new transgender legislation, according to the BBC.

Using Galatians 1 as the foundation for his sermon, Folau warned the audience it was impossible to please both God and man.

“True believers in Christ, are we going to follow through and profess Him wherever we go?” he asked while also calling out professing Christians who refuse to draw attention to their beliefs because of fear.

“Are we too scared because we might be cast out by our workplace or cast out of somewhere because we're not liked or loved by those around us and don't believe the same thing we do?” he asked.

He also acknowledged that those who are called by God could face persecution.

“You might be the only born-again Christian in that workplace, you might feel a bit awkward with your co-workers because they are in the world and you're not,” he said.

“As Christians, we must be strong. Don’t ever be ashamed of the Gospel. Stand up, and be bold.”

The message was similar to the one he demonstrated immediately after his firingwhen he affirmed his personal belief in a “God that's in control of all things.”

“Whatever His will is, whether that's to continue playing or not, I'm more than happy to do what He wants me to do,” he said. “First and foremost, I live for God now. His plans for me are better than whatever I can think.”

Earlier this month, Folau filed a claim with the Fair Work Commission against Rugby Australia citing a breach of contract, alleging that he was targeted because of his religion. He’s seeking up to $10 million in damages.

“No Australian of any faith should be fired for practicing their religion,” he has said.