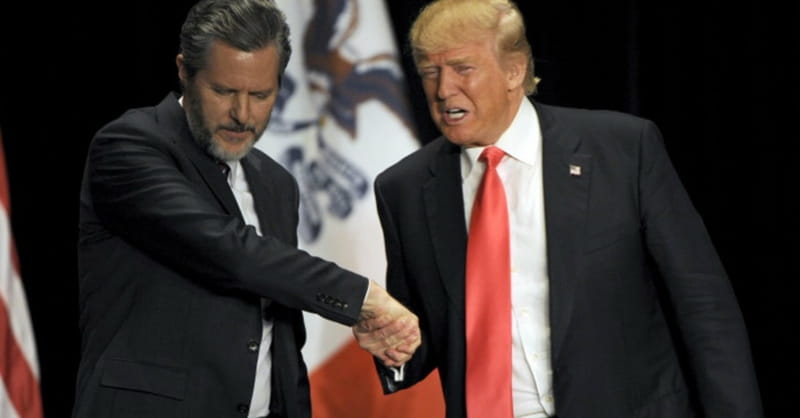 But that wasn’t enough to persuade him to accept Trump’s offer to become secretary of education, he said.

Falwell told RNS the decision was due to concerns for the health of his family and the university he leads.

Falwell’s relationship with Trump began when the real estate mogul spoke at Liberty in January as part of his effort to capture the votes of conservative Christians.

Days later, Falwell became one of the first and most vocal evangelicals to endorse Trump, sticking by him throughout the campaign despite much controversy and pushback from Liberty students and alumni. Falwell even campaigned for the Republican candidate, whipping up evangelicals who voted for Trump in overwhelming numbers.

With Falwell having paid such a high price to help elect the candidate, conventional political wisdom suggests Trump owes the college president something in return. A job as education secretary might make sense, given Falwell’s experience in higher education and Liberty’s rapid growth.

Yet Falwell’s name was not listed as a top pick by most news outlets and on Nov. 23 he chose Michigan billionaire and fellow evangelical Betsy DeVos to be education secretary.

Falwell said he talked about the post in separate phone calls with the president-elect and his son-in-law, Jared Kushner. His interest was motivated by the possibility of reforming an overregulated government system that he believes micromanages colleges and universities, he said.

Within a couple of days, Falwell said, the president-elect invited him to come to Trump Tower to discuss the possibility. The college president called a meeting with his family before departing for New York, but said his family couldn’t get comfortable with the idea.

On Nov. 17, Falwell said, he met with the president-elect, Ivanka Trump, Steve Bannon, and Reince Priebus in New York City.

According to Falwell, “Mr. Trump told me repeatedly that the job was mine if I wanted it.”

But he declined the offer.

“My two sons and their wives were concerned that the incredibly positive momentum that Liberty University is experiencing could be thwarted if I suddenly left to work in D.C.,” Falwell said via email. “My wife and 16-year-old daughter also had concerns about the disruption to our lives that might result.”

Falwell said Trump asked for a six-to-eight year commitment, but he felt he could only promise to serve for two.

“In all candor, we could’ve worked something out on the term for the secretary post,” he said, “but the family really didn’t want me to go.”

Falwell is a lawyer but his experience in higher education has been mostly at the university founded by his late father, Moral Majority leader Jerry Falwell.

Falwell said Trump planned to divide the secretary of education role in half. The secretary position would be responsible for colleges and universities and a separate official would oversee kindergarten through 12th grade.

In lieu of the Cabinet-level position, Falwell said he agreed to an advisory position. He said he could not disclose details at this time, saying only that it is “a role that allows me to influence education policy but remain at Liberty.”

Calls to the Trump transition team were not immediately returned.

If Trump did offer Falwell the position, it would suggest DeVos, Trump’s choice for position, may not have been the president-elect’s first pick.

“For the record,” Falwell added, “I believe Betsy DeVos is an excellent choice to be the Secretary of Education.”