An audio recording recently surfaced in which a prominent Southern Baptist leader said abused wives should focus on praying, “be submissive in every way that you can” and not seek divorce.

The recording, which dates back to the year 2000, is of Paige Patterson, president of the Southwestern Baptist Theological Seminary in Fort Worth, Texas, and a leading figure in the Southern Baptist Convention. Many credit him with orchestrating the conservative resurgence of the denomination beginning in 1979.

Not surprisingly, Patterson’s comments touched off a flurry of condemnation and calls for him to step down. Commentators mostly objected to the implication that he condoned domestic violence, which he has denied. But the Southern Baptist Convention has had a long history of conservative stances on women that it maintains are based on Scripture.

So what’s the back story on the SBC’s position on the role of women, and wives in particular?

More than 2,000 Southern Baptist women have signed a letter asking the trustees of a Fort Worth, Texas, seminary to take action against its embattled president after audio and video clips emerged in which he counseled physically abused women to quietly pray and described a 16-year-old’s body as “built.”

Megachurch pastor Les Hughey has resigned after being accused by seven women of sexual abuse.

No evangelical pastor in America has been more influential in my lifetime than Bill Hybels. As accusations of sexual harassment and misconduct break, how can Christians and church leaders respond?

It was the most amazing courtroom testimony I’ve ever heard. And if you haven’t heard it yourself, you need to.

Rachel Denhollander’s words gave the light of Christ. Will yours do the same today? 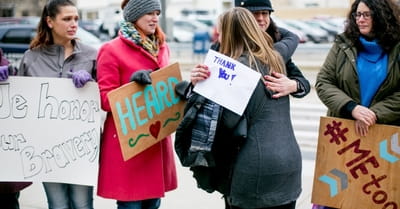 Denhollander’s powerful testimony reminds all of us of the need for both justice and forgiveness. Though evil is strong, forgiveness is truly stronger and more compelling.

Rachael Denhollander, the first victim to speak out about Nassar’s abuse, spoke last at the hearing.

Over the past several months our society has experienced a monumental shift in the treatment of women — particularly in regard to how they are treated by men in power.