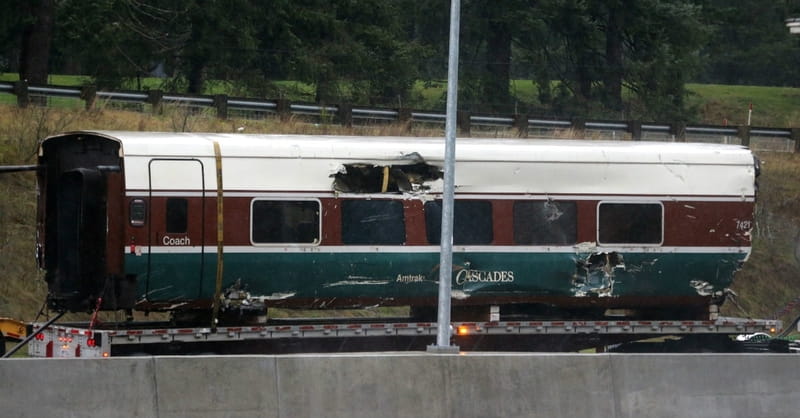 Three people died Monday when a speeding Amtrak train derailed from an overpass. A hundred other passengers were injured and brought to nearby hospitals. About 20 people were still hospitalized as of Wednesday evening.

As CNN states, “The passenger train derailed … after careening around a curve at almost three times the speed limit.” Reportedly, the train was traveling at 80 mph in a 30-mph zone when it flew from the tracks, and the derailment occurred just as the tracks were passing over a freeway. The derailed passenger cars launched from the overpass, smashing onto the street below.

One passenger interviewed after the crash described the experience as “like being inside an exploding bomb.” Another shaken passenger describes what she saw in the aftermath—a dead body with the clothes ripped entirely off.

The exact reason for the train’s uncalled-for high speeds and consequential crash is currently unknown. As Washington Governor Jay Inslee stated in his comments about the accident, “There are a thousand unanswered questions about this right now.”

The three victims of the crash were men, two of whom were major railway enthusiasts. Rail Passengers Association President Jim Mathews called Jim Hamre and Zack Willhoite “advocates of transit and passenger rail for decades.” Jim and Zack were in their early sixties and mid-thirties, respectively. Benjamin Gran, aged 40, was the third victim. His body was not identified until a couple days after the crash.

Photo: Emergency crews continue lift a train car off the bridge after an Amtrak train that derailed onto Interstate 5 the previous day killing several passengers and injuring dozens more, on December 19, 2017 in Dupont, Washington. The train was on its inaugural run from Seattle to Portland that offered faster service.