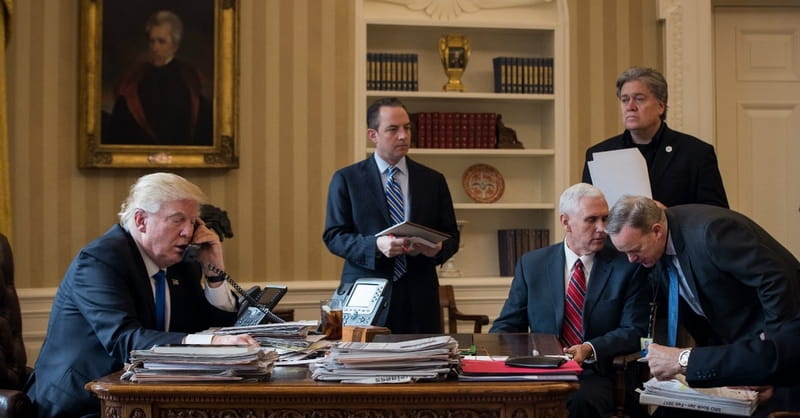 One of the most influential Iowan pastors involved in politics, religious freedom, and pro-life advocacy, Pastor Terry Amann, met privately with then-presidential candidate Donald Trump in April 2015. In less than one year from becoming President Trump, he successfully helped release one pastor who had been languishing in an Iranian prison, keeping his promise to a request Amann made when they first met. Last year, Amann described how President Trump kept his promise. This year, Amann is again asking for Trump’s help, this time to find a missing U.S. missionary who was kidnapped in Africa in 2013. Below is Amann's open letter to President Trump. If the past is any indication, Trump is the most likely person able to answer his call for help.

Since you’ve become president, you’ve strived to keep your promises to the American people. I want to thank you for keeping your promise to me, specifically by helping free Pastor Saeed Abedini. Now, I’m calling on you again to help find a missing American missionary, Jerry Krause, who was kidnapped in Africa on April 7, 2013. His family is being denied access to information about his plight. They are seeking answers, resolution, and his safe return home.

Kraus, an American pilot, served the Mission Aviation Fellowship for roughly 22 years as a missionary in Mali and the Democratic Republic of the Congo, and later flew for the Sahel Aviation Service in Mali. His plight is posted on the Help Find Jerry Facebook page:

Jerry Krause, a U.S. citizen, was kidnapped on April 7th, 2013 while flying a Beechcraft 1900C from South Africa to Mali. All contact was lost on his approach to Sao Tome, a small island off of the coast of Africa. No concrete evidence of Jerry or his airplane were located during the first two months of investigations. Nevertheless, the South African Civil Aviation Authority (the governing authority over the aircraft incident) published their official report that Jerry Krause crashed and that Jerry Krause was dead. The Krause family did not believe that Jerry was dead, but they had no evidence to support their belief.

However, this has changed. First, the South African Civil Aviation Authority has removed their official report, which is a public record, due to “new evidence” being provided (via email with Albert Phuti Morudi, the Director of Investigations, April 5th, 2016). Although we have sought to learn what this new evidence is, we have been denied access to it. The airline incident was re-opened and has yet to be re-posted. Second, Jerry has been seen and found to be alive. The U.S. government knows Jerry’s location. However, the Department of Defense has not had the correct authorization to act on this information. (Emphasis added.)

If this is truly the case, why has the United States government not acted to ensure his safe return home? Why has the family had little-to-no-news and (limited information about the investigation) for more than one year?

How does a plane go missing, and there also be no debris from its alleged crash? His family deserves answers, which I’m confident you’ll be able to provide. Please help bring him home, as you did with Pastor Saeed.

Mr. President, I am asking to you please intervene and authorize the Department of Defense to defend this American citizen and bring him home.

Thank you Mr. President. You and your family remain in my prayers. Keep up the great work.