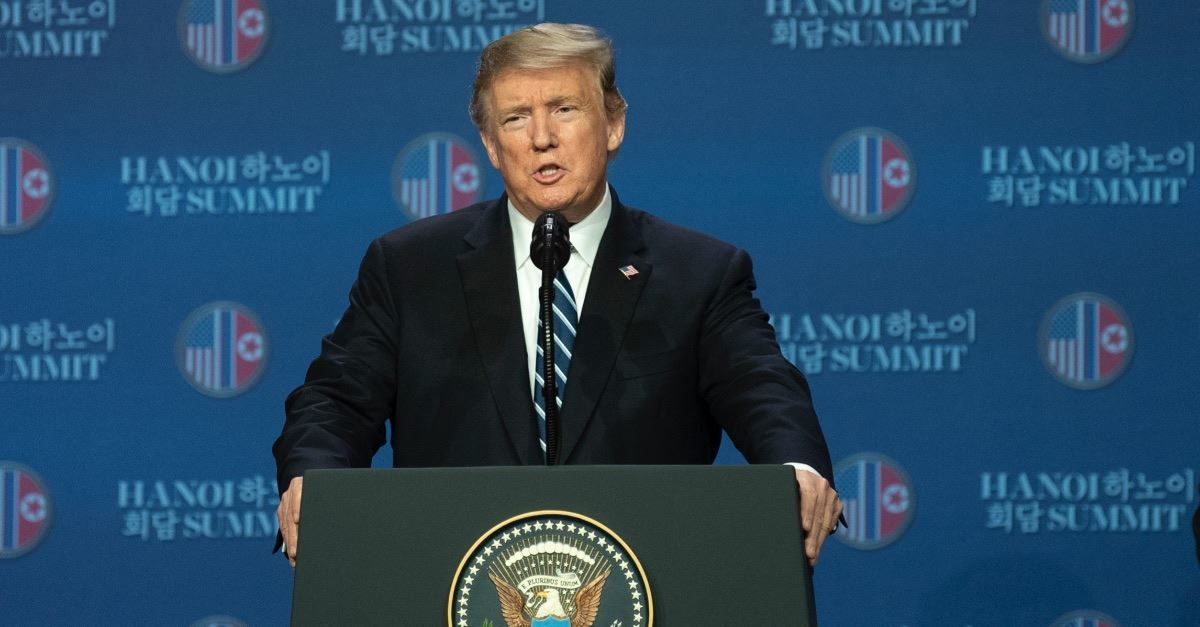 The Vietnam summit has ended.

North Korean leader Kim Jong Un insisted all US sanctions be lifted on his country, offering to dismantle his Yongbyon nuclear complex in return. President Trump said Washington wanted a deal that includes other parts of the North’s nuclear program. “I just felt it wasn’t good enough,” Mr. Trump said. “We had to have more.”

The two sides ended their meeting amicably but without producing an agreement. Whether the summit is a setback or a step toward peace is open to interpretation.

While Mr. Trump and Mr. Kim were meeting in Vietnam, Michael Cohen was testifying before Congress. The president’s former personal attorney spent more than six hours yesterday answering questions from the House Oversight Committee. Whether his statements damaged the president or not is open to interpretation.

Historical events are objective, but the way they are reported and remembered is subjective.

30 million pages headed for the moon

Israel launched its first spacecraft last week. “Beresheet” (Hebrew for Genesis) will be the smallest craft to land on the moon, but it is carrying something of great significance: the so-called Lunar Library.

This is a disc containing twenty-five thousand books, a full copy of Wikipedia, and information on understanding earthly languages—in total, a thirty-million-page tome. The “library” is intended to preserve humanity’s knowledge and history long after we’re gone.

Did your story make the Lunar Library? On the day of your salvation, you joined a faith family that will be alive in Paradise ten thousand millennia after the moon and everything on it perishes.

United Methodists made headlines this week when they voted at a conference in St. Louis to strengthen their denomination’s ban on gay and lesbian clergy and same-sex marriages. Not surprisingly, the New York Times is focusing on the frustration of LGBTQ advocates. One is quoted as claiming, “It is time for another movement.”

The Times dedicates only one paragraph to the larger story: Methodists are declining in the US but growing significantly in African nations “which typically have conservative Christian views.” United Methodists in America comprise only 19 percent of the global Methodist membership. This week’s vote may anger Americans, but it is likely to be welcomed by many around the world.

Here’s another story that hasn’t received much coverage: more than forty thousand Christians met in Orlando last Saturday to launch what its founder hopes will become “the greatest Jesus movement we have ever seen.”

Here’s one more: after an Alabama newspaper editor called for the KKK to “ride again,” widespread condemnation caused him to resign. The new editor and publisher is an African American woman.

When God called Noah to build the ark, few paid attention at the time (Genesis 6:14; 7:7). When Abram left his home to follow God’s call, who understood the future significance of his present obedience? When Moses met God at the burning bush, could anyone in Egypt foresee the implications of their encounter?

We could add Paul’s conversion on the road to Damascus, John’s exile to Patmos, and especially Jesus’ birth in Bethlehem. All illustrate the point: what makes headlines seldom makes history—and vice versa.

I’d like to recommend a very insightful article by Derek Thompson in The Atlantic: “Workism Is Making Americans Miserable.” He notes that work has evolved “from a means of material production to a means of identity production.” Many experience their work as “a kind of religion, promising identity, transcendence, and community.”

However, as Thompson notes, wealth and success that make Fortune and Forbes lists do not sustain our souls: “Our jobs were never meant to shoulder the burdens of a faith, and they are buckling under the weight.”

What can fill “this infinite abyss”?

Here’s why: this world is not our home.

Blaise Pascal: “What else does this craving, and this helplessness, proclaim but that there was once in man a true happiness, of which all that now remains is the empty print and trace?

“This he tries in vain to fill with everything around him, seeking in things that are not there the help he cannot find in those that are, though none can help, since this infinite abyss can be filled only with an infinite and immutable object; in other words by God himself.”

We know that “the world is passing away along with its desires, but whoever does the will of God abides forever” (1 John 2:17). As a result, “Our citizenship is in heaven” (Philippians 3:20).

When we live for the eternal, we find purpose in the temporal. When we love God fully, we love our neighbor well. When we “seek first the kingdom of God and his righteousness,” the result is that “all these things will be added to you” (Matthew 6:33).

Are you seeking first the kingdom of God today?