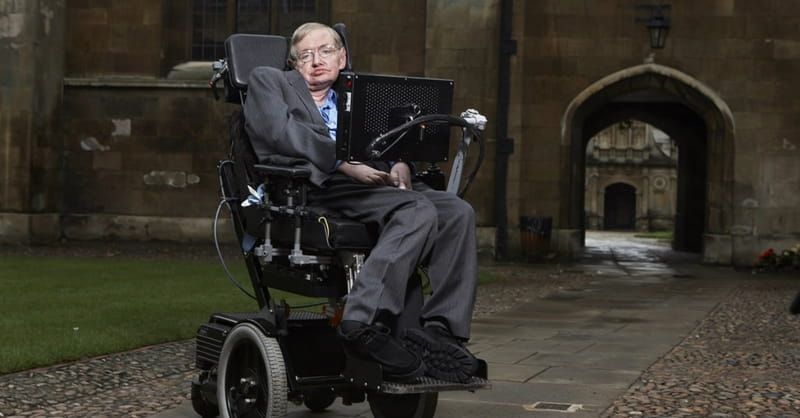 Stephen Hawking was one of the greatest physicists in history. One professor predictedthat scientists “will still be talking about Hawking radiation,” his theory about black holes, a thousand years from now.

His spirit was buoyant as well; an actor who played him in a 2014 biopic called him “the funniest man I have ever met.” I was deeply impressed upon reading his bestseller, A Brief History of Time, and am not surprised that it has sold more than ten million copies.

After Hawking died this week, I read his autobiography, My Brief History. His story is both fascinating and tragic, with enormous implications for our faith and culture today.

He “wanted to fathom the depths of the universe”

The facts of Stephen Hawking’s life read like a novel. He was born on January 8, 1942, exactly three hundred years after the death of Galileo. He did not learn to read until the age of eight. He was never ranked more than halfway up his academic class.

When Hawking was diagnosed with ALS at the age of twenty-one, doctors predicted that he would live only another two years. He survived his disease for fifty-five years. As his body deteriorated, eventually he used a single cheek muscle to control communication devices, writing only a few words a minute.

Nonetheless, he was able to produce groundbreaking scientific work. He was especially known for his explanation of the behavior of black holes. From the beginning of his academic career, Hawking “wanted to fathom the depths of the universe,” seeking to understand “where we came from and why we are here.”

Several times in his autobiography, he states that he had a “satisfying life.” He points to his successful career, the fact that he was married twice and had three “beautiful and accomplished children,” and his global travels and meetings with world leaders.

He concludes his book: “I’m happy if I have added something to our understanding of the universe.”

Some atheists reject God’s existence because they cannot reconcile an all-knowing, all-loving, all-powerful God with evil and suffering in the universe. Tragedies such as yesterday’s bridge collapse in Florida cause skeptics such as Sam Harris to proclaim that there is no God.

Hawking’s atheism was of another kind.

He stated clearly: “We are each free to believe what we want and it is my view that the simplest explanation is that there is no God. No one created the universe and no one directs our fate.”

It’s not that Hawking had no exposure to biblical truth. His father insisted that he study the Bible as a child for its literary value. In My Brief History, he tells of working with a research assistant who “was an evangelical Christian, and he did his best to convert me when he later came to live with us in Cambridge. He used to read me Bible stories at breakfast.” The physicist assured him that he “knew the Bible well” from earlier studies. Hawking even helped smuggle Bibles into the Soviet Union at the request of a Baptist who was part of his travel group.

In A Brief History of Time, he referred to the “mind of God.” However, he meant only “the embodiment of the laws of nature.” In my research, I found at least three reasons why Hawking chose atheism.

First, he rejected the concept of a personal God with whom we can have a personal relationship: “When you look at the vast size of the universe and how insignificant an accidental human life is in it, that seems most impossible.” But why? Why is the apparent insignificance of a human life relevant to the existence of a Creator and the possibility of relationship with him?

Second, he became convinced that “spontaneous creation” explains the existence of the universe, with no need to appeal to a Creator. But his theory requires the prior existence of gravity. As Oxford mathematician John Lennox notes, Hawking must then explain how gravity came to be. He must also explain how a law can create physical reality (for instance, Newton’s laws of motion do not cause a moving car to exist). And, even given Hawking’s parameters, could God not have designed a self-creating universe?

Third, he asserted: “I regard the brain as a computer which will stop working when its components fail. There is no heaven or afterlife for broken-down computers; that is a fairy story for people afraid of the dark.”

But computers and people are far more different than we are alike. This is what philosophers call a “category mistake,” like asking the color of seven or the weight of a circle. The fact that computers have no afterlife bears no relevance to an afterlife for humans.

Upon this mistaken logic, Hawking tragically risked his eternity.

“I am the bread of life”

Imagine what his brilliant mind could have contributed to humankind if it had been empowered by the Spirit of God. Imagine his influence as an intellectual Christian. And imagine his eternal reward if he had turned from the creation to its Creator, trusting his soul to our Savior.

If Christians do not grieve the deaths of Stephen Hawking and other non-Christians, something is wrong. We are then implicit universalists, ignoring the fact that “whoever does not believe is condemned already, because he has not believed in the name of the only Son of God” (John 3:18). Such a person is not in the “book of life” and will spend eternity separated from God in hell (Revelation 20:15).

If people could go to heaven without Jesus, why did Jesus die for us? Why did Paul have “great sorrow and unceasing anguish in my heart” for his fellow Jews who had rejected the gospel (Romans 9:2)?

Our Savior’s invitation is still open: “I am the bread of life; whoever come to me shall not hunger, and whoever believes in me shall never thirst” (John 6:35). But we must turn from ourselves to our Maker: “It is the Spirit who gives life; the flesh is no help at all” (v. 63).

Beware the “illusion of knowledge”

Are you praying for the non-Christians you know to know the Truth before it is too late?