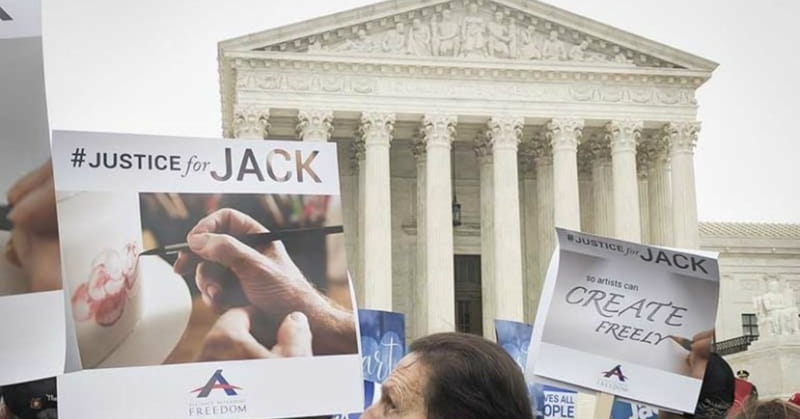 What if an atheist baker refused to bake a cake for a First Communion?

What if a college with a religious affiliation didn’t want to rent out its chapel to a gay couple?

What if a makeup artist didn’t want to ready a gay couple for their wedding?

At the Supreme Court on Tuesday (Dec. 5), the justices lobbed hypothetical after hypothetical at the lawyers representing each side of Masterpiece Cakeshop Ltd. v. Colorado Civil Rights Commission, a free speech and religious rights case — and one of the most publicized of the year.

No one on either side of the dispute doubts that Colorado baker Jack Phillips’ Christian convictions drove his 2012 decision to refuse to custom-bake a wedding cake for Charlie Craig and David Mullins.

Phillips will sell gay people cupcakes, brownies and birthday cakes, but because he believes gay marriage is a sin, he won’t bake a cake for their weddings.

The Colorado Civil Rights Commission called that stance discrimination, and the Colorado Court of Appeals agreed. He is hoping the Supreme Court will give a different answer.

“It’s hard to believe,” Phillips said, tearing up outside the court after his case had been heard, that the government wants him to choose between his business “and violating my relationship with God.”

Inside the court, lawyers representing the couple said the state of Colorado merely insisted that the baker abide by its Anti-Discrimination Act, which requires businesses to treat all customers equally, regardless of race, gender, disability and sexual orientation, among other categories.

“To do that would be to constitutionally relegate gay and lesbian people to second-class status, even when a state has chosen, as Colorado has done here, to extend them equal treatment,” Cole told the court.

Phillips’ attorney appealed to the justices to protect his free speech rights.

“He should receive protection here as well,” said Kristen K. Waggoner, senior vice president of the legal division of the Alliance Defending Freedom. “This law protects the lesbian graphic designer who doesn’t want to design for the Westboro Baptist Church, as much as it protects Mr. Phillips.”

As in other recent cases with heavy religious overtones — the Hobby Lobby decision on contraceptives and insurance coverage in 2014, and the case that legalized gay marriage a year later — the court divided along its usual lines, with Anthony Kennedy playing his customary role as the up-for-grabs justice whose vote could likely decide the case.

And, as usual, Kennedy offered each side reason for hope. He fretted about Phillips’ behavior toward gay people, but he also sensed among Colorado officials a “hostility to religion.”

Justice Neil Gorsuch, nominated by President Trump, also suggested a hostility toward Phillips’ faith by the state of Colorado.

Part of the Colorado Civil Rights Commission’s remedy was for Phillips to instruct his staff on the anti-discrimination law he violated. Gorsuch wondered whether that flouted the baker’s rights.

“Why isn’t that compelled speech and possibly in violation of his free-exercise rights?” Gorsuch said, referring to Phillips’ First Amendment religious rights. “Because presumably he has to tell his staff, including his family members, that his Christian beliefs are discriminatory.”

All he had to do was instruct his employees on the law, replied Frederick R. Yarger, Colorado’s solicitor general, who with Cole defended the commission. “It has nothing to do with a particular person’s belief.”

“His belief is his belief,” interjected Justice Ruth Bader Ginsburg. All he has to do is instruct them that “this is what the law of Colorado requires.”

Much of the back-and-forth between the justices and the lawyers explored whether Phillips, as a baker, could claim a violation of his speech rights. Is a cake art? Is it speech? What about a floral arrangement? Or a makeup artist’s transformation of a bride’s face?

Justice Samuel Alito, who has said he is concerned about the state of Americans’ religious liberty, tried to clarify the question with another hypothetical: that of the person hired to write wedding vows for others — clearly speech.

“Somebody comes to one of these services and says … we want to express is that we don’t believe in God, we think that’s a bunch of nonsense, but we’re going to try to live our lives to make the world a better place.”

Alito continued: “The person who is writing this is religious and says: I can’t lend my own creative efforts to the expression of such a message.”

Would you say, Alito asked Cole, “too bad because you’re a public accommodation. Am I right?”

The case is not parallel, said Cole, and were it to arise, “it would certainly be open to this court to treat it differently.”

As he closed his argument before the court, Cole warned against carve-outs for those who say their religion trumps anti-discrimination law.

“Once you open this up, once you say generally applicable regulations of conduct have exceptions when someone raises a religious objection, or in this case have objections where someone raises a speech objection, you’re in a world in which every man is a law unto himself.”

The court is expected to rule on the case in early summer.