What Do Politics and UFC Have in Common? 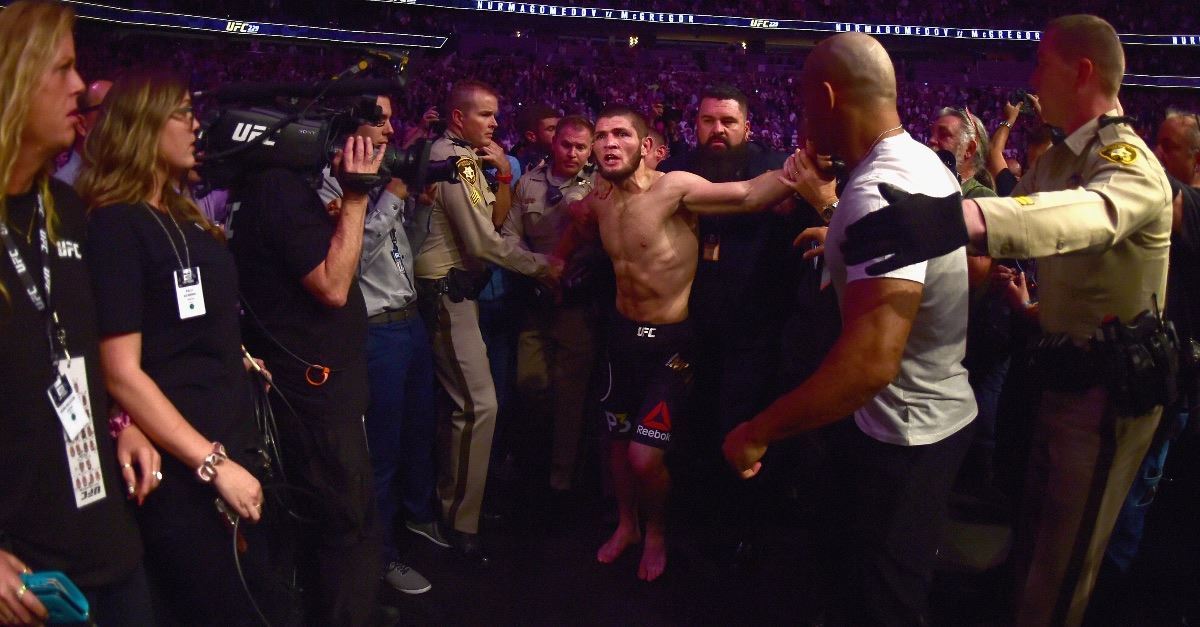 What Do Politics and UFC Have in Common?

Did you hear about the fight that began after it ended?

Three million people paid to view Khabib Nurmagomedov fight Conor McGregor in an Ultimate Fighting Championship title bout Saturday night. A bitter personal conflict between the two has been brewing for months. After Nurmagomedov won, he climbed out of the octagon-shaped cage in which they fought and attacked one of McGregor’s corner men. Two men from Nurmagomedov’s camp jumped into the cage and attacked McGregor.

Did the verdict settle the hostilities? McGregor: “I always say you should aim for peace, but if you can’t get peace, you should aim between the eyes. This will never be over.”

The heart of the issue

A petition to impeach Kavanaugh has now gathered over 125,000 signatures. Republicans are hoping the fight galvanizes support ahead of the midterm elections in November.

The conflict over Justice Kavanaugh’s confirmation was not just another example of the divisive rhetoric that has split America into “red” and “blue” states for years. Nor is the animosity solely due to the fact that a five-to-four conservative majority now sits on the Court.

Sen. Mazie Hirono, D-Hawaii, explained the issue succinctly yesterday: if the conservative justices do not overturn Roe v. Wade, “they will nullify it, pretty much.” She expects the new Court to allow more state restrictions on abortion.

And this is the heart of the issue.

When the system fails

American democracy, while exceedingly complex, can be reduced to this rather simple formula: Citizens elect leaders to represent them in the White House and Congress. Congress makes laws that the courts interpret and enforce.

If citizens are unhappy with their laws, they can elect new leaders to make new laws. Supreme Court justices receive lifetime appointments so they can serve without partisan prejudice.

The system works only so long as citizens agree to abide by its results or change them. It failed in 1861 when Abraham Lincoln became president and southern states seceded from the Union rather than support his anti-slavery leadership.

Now it is being tested again, this time over the 1973 Roe v. Wade ruling that legalized abortion.

Pro-life supporters believe that life begins at conception and are convinced that the Supreme Court’s decision has led to the deaths of more than sixty million babies. Pro-choice supporters claim that science cannot state objectively when life begins, so the decision should rest with the mother. They view “reproductive choice” as essential to a woman’s most basic freedoms.

This is a zero-sum conflict, pitting the Declaration of Independence‘s guarantees of “life” and “liberty” against each other in the “pursuit of happiness.” We can expect the battle to continue in the coming years because it is a symptom of an even larger conflict in our culture.

How should Christians respond to the resulting political divisions of our day?

As Keller wrote recently in the New York Times, we must not identify our faith with a political party. Such identification tells non-Christians that they have to join our party to become believers. And it also forces us to choose between “liberal” issues such as poverty and racism and “conservative” issues such as traditional marriage.

The more divisive our culture becomes, the more Christians must rise above our divisions by embracing an ethic of love. Our Father calls us to love those who reject us (Matthew 5:44) since this is how he loves us: “While we were still sinners, Christ died for us” (Romans 5:8). If we do not speak the truth in love (Ephesians 4:15), who will believe that we serve a God who is love (1 John 4:8)?

“He came to take over”

Priscilla Shirer is a bestselling author, well-known actress, and international speaker. The daughter of Tony Evans, one of the greatest expositors of our generation, she is a tremendously gifted communicator of biblical truth.

Then she states: “God doesn’t ride the backs of donkeys or elephants. He did not come to take sides. He came to take over.”