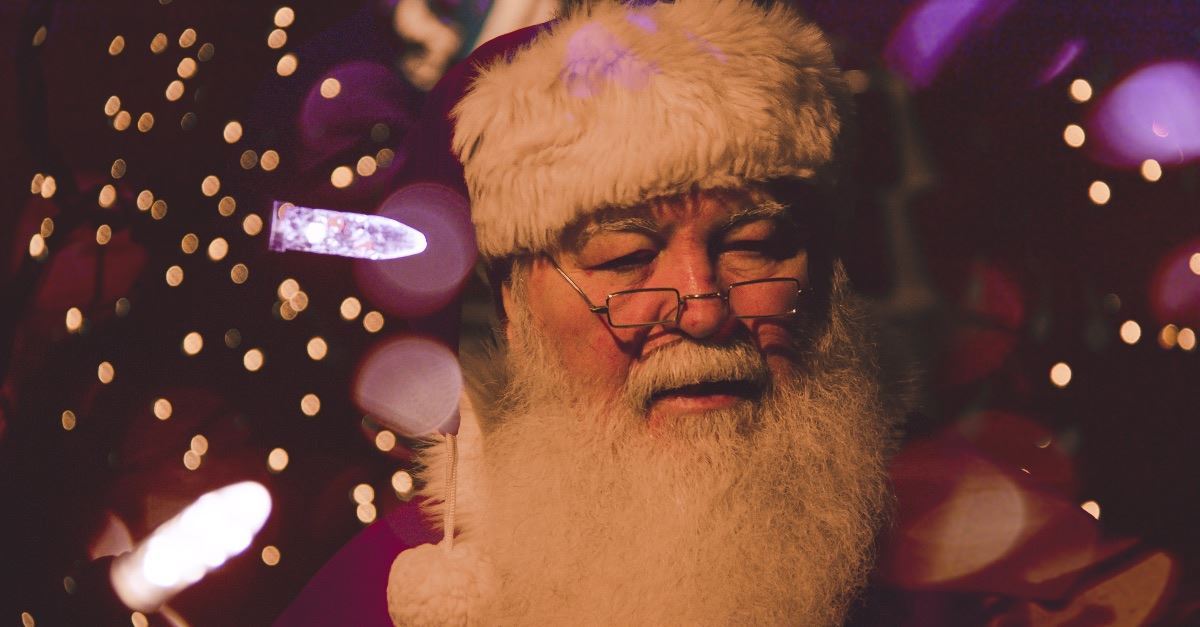 It was the nightmare before Christmas.

Children were lined up to visit Santa Claus in the English town of St. Ives, Cambridgeshire, last Sunday. An alarm at a nearby but unrelated event caused an evacuation of the building.

Organizers euphemistically said later that Santa “assisted in the evacuation of the building.” Here’s how: Parents and children were leaving when Santa tore into the room, ripped his hat and beard off in front of fifty children, and started shouting and swearing at people to leave.

One mother said she had to tell her children that the man wasn’t really Santa but an imposter who would be going on the “naughty list.” Organizers will try again this weekend but have not said whether the same Santa Claus will return.

Christmas as a spiritual buffet

In a similar vein, I heard recently about an unusual manger scene.

I was honored last Wednesday to be back on the radio show, “Equipped with Chris Brooks.” Chris is a brilliant pastor, cultural theologian, and radio host. During our conversation, he told us about a good friend who was jogging in his neighborhood and passed a nativity scene. Mary, Joseph, the shepherds, and the Magi were all present.

But the baby Jesus was missing.

As Chris noted, some traditions don’t add Jesus to their manger scenes until Christmas Eve. Perhaps that’s what this neighbor intended. Or perhaps this nativity scene is a sign of our times.

It seems to me that “Christmas without Christ” could be a theme of our holidays these days. Christmas specials are televised nightly but seldom refer to Jesus’ birth. Christmas decorations in my Dallas neighborhood feature inflatable Santas, snowmen, reindeer, and a plethora of lights, but few mangers.

Yesterday, I quoted William Booth’s prediction that the coming century would embrace “Christianity without Christ.” In a day when “spirituality” is replacing religion, more and more people see their relationship with the divine as a spiritual buffet where they can pick from religious traditions as they wish.

If Jesus’ “turn the other cheek” ethic of love appeals to them, they’ll include that. They might add Buddhism’s withdrawal from materialism, or Hinduism’s offer of a next life based on this one, or the New Age claim that we can find the divine within ourselves.

What matters is that we discover and embrace “our truth.” Or so we’re told.

“I don’t believe in Canada”

Apply this thinking to any other sphere of life. Imagine that you’re not feeling well, so you pick from a variety of medical options according to your personal inclinations and claim the results as “your body’s truth.”

Or you’re designing a bridge over a river and make engineering decisions based on your preferences rather than physical realities. Or you’re driving home for the holidays and choose the roads you’d like to travel whether your GPS agrees or not.

One of Satan’s most subtle strategies is to convince us that spiritual realities are subject to our subjective whims. I once talked with a man who stated definitively, “I don’t believe in hell,” as though his opinion had anything at all to do with hell’s reality. Imagine saying, “I don’t believe in Canada” and expecting Canada to vanish as a result.

Here’s the problem: Christians who would never say that biblical truth is subject to “their truth” can be tempted to live as though it is.

A. W. Tozer: “Religion today is not transforming people; rather it is being transformed by the people. It is not raising the moral level of society; it is descending to society’s own level, and congratulating itself that it has scored a victory because society is smilingly accepting its surrender.”

Jesus called us “the light of the world” (Matthew 5:14). The definite article means that we are the only light of the world. If you’re the one person with a flashlight in a dark room, whose fault is the darkness?

Here’s the problem: you and I cannot live spiritual lives without the power of the Spirit.

My purpose this morning is not to ask you to try harder to do better. If you didn’t want to know Jesus and make him known, I doubt you’d be reading this Daily Article. But we are fallen people in a fallen culture. We can be as distracted from the reason for the season as anyone.

If the Spirit were withdrawn from your life

That’s why we need to ask the Holy Spirit to control and empower us every day (Ephesians 5:18). Would you pause and ask the Spirit to lead you to Jesus again today and to lead others to him through you?

If the Holy Spirit was withdrawn from your life today, who would know?