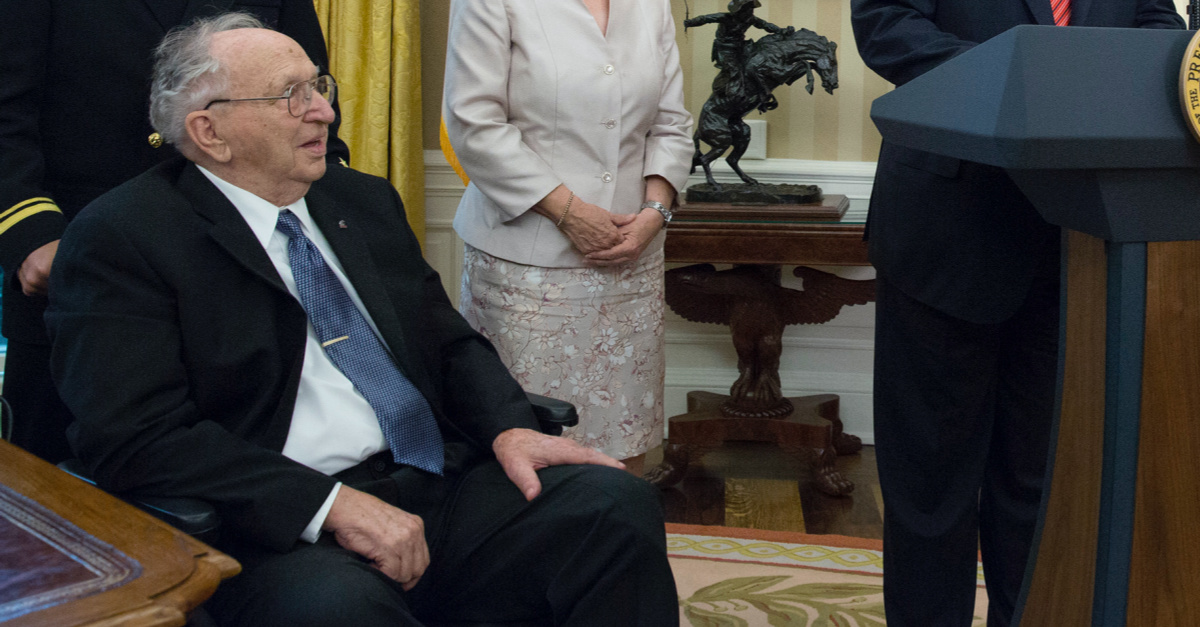 The USS Arizona has seen its last burial.

Lauren Bruner was the second-to-last man to escape the ship during the Japanese assault on Pearl Harbor. He was one of only 334 crew members to survive the December 7, 1941 attack that killed 1,177 of his fellow sailors.

When the ship exploded, Bruner swam across seventy feet of burning water to reach the repair ship USS Vestal. He suffered burns on nearly 80 percent of his body and was wounded by Japanese gunfire. He recovered from his injuries and returned to sea, serving aboard the destroyer USS Coghlan in eight more battles against the Japanese. He died this year on September 10, just months before his ninety-ninth birthday.

More than nine hundred sailors are entombed within the sunken ship. The remains of forty-three USS Arizona survivors have been interred there over the years as well. Per his request, an urn containing Bruner’s ashes was placed by divers inside the ship Saturday, the seventy-eighth anniversary of the attack.

Does reading about Lauren Bruner fill you with gratitude for his courage? It does for me, especially because what happened at Pearl Harbor so directly changed what would become my life.

My father grew up in a small town in Kansas with plans to become a doctor. He had never seen Japan prior to the “date that will live in infamy.” I doubt he had heard of Pearl Harbor before it was attacked.

But when President Roosevelt declared war on Japan (see his moving speech here), my father immediately enlisted in the Army and fought the Japanese in the South Pacific. Most of the men with whom he served died there. He witnessed atrocities that would mark him for the rest of his life. His entire trajectory was changed by his military service.

Sixteen million other Americans joined my father in serving our nation during World War II. Of their number, 405,399 were killed in action and 671,278 were wounded. No one who served our nation would ever be the same. We owe them a debt of gratitude we can never repay.

“Oh that you would bless me and enlarge my border”

I was reading through 1 Chronicles and came upon the passage made famous by Bruce Wilkinson’s bestseller, The Prayer of Jabez: “Jabez called upon the God of Israel, saying, ‘Oh that you would bless me and enlarge my border, and that your hand might be with me, and that you would keep me from harm so that it might not bring me pain!’ And God granted what he asked” (1 Chronicles 4:10).

For God to “enlarge” his “border” meant to increase his territory and influence. Jabez wanted his life to count as fully as possible. But he knew that this was impossible unless the “hand” of God was “with” him to lead, empower, and protect.

Such a prayer may seem audacious, but “God granted what he asked.” It seems that the Lord wants us to seek to be all we can be for his glory and the good of others:

The temptation of being good

As I read about Lauren Bruner this weekend and thought about my father’s sacrifice, I was inspired to make Jabez’s prayer my own. If millions of men and women could give their best to serve our nation, I can give my best to serve my Lord.

Here’s the problem: it is tempting to settle for less than our best when our good seems better than others. If we have not yielded to cultural pressure on abortion, homosexual relations, euthanasia, etc., we can conclude that we are more moral than those who have. But heterosexual sexual sin is sin as well. God cares for the poor as well as the unborn. He wants the best medical care for the indigent as well as the terminally ill.

And he wants us to champion all that he champions. I have noticed that it is easier to preach against sins I am not tempted to commit personally.

The secularity of Christmas

It is interesting that Jesus chose to be born in a “secular” stable rather than a religious shrine. He chose for his first worshipers field hands who were ritually unclean and unwelcome at the Temple or synagogue. The first religious leaders who met him were pagans from what we call Iran today.

Jesus chose to make his home in “Galilee of the Gentiles” (Matthew 4:15). Neither he nor any of his apostles had rabbinic training. None would be “ordained” as we know the term today.

In other words, God intends his kingdom to extend to every corner of the culture, not just the parts we call “spiritual.” Here we discover a subtle but deadly temptation of the enemy: if he cannot lead us to reject all spirituality, he will tempt us to confine it to a day, a morning habit, a select group.

And to call ourselves good because we are better than some.

How to be “more than conquerors”

Abraham Kuyper: “There is not a square inch in the whole domain of our human existence over which Christ, who is Sovereign over all, does not cry: ‘Mine!’”

The more we are submitted to Jesus, the more we can be used by him. The more our lives count for what counts most. The more we experience his abundant life (John 10:10) and are “more than conquerors through him who loved us” (Romans 8:37).

How fully will you surrender to the sovereignty of Jesus Christ today?