The Reason We March for Life: Civility is Not a Strategy 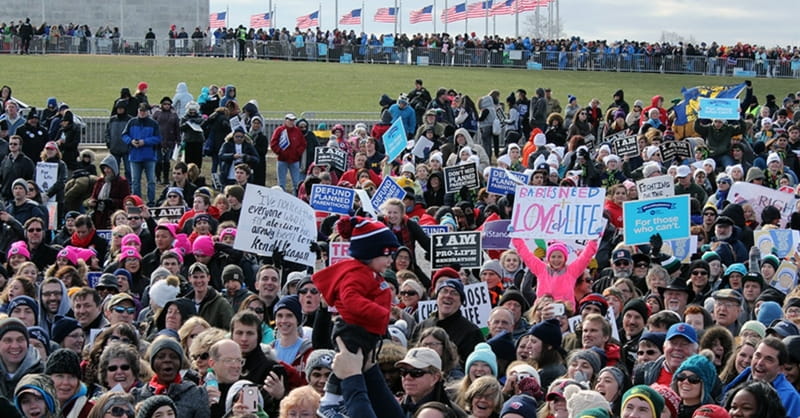 The Reason We March for Life: Civility is Not a Strategy

You really have to see the time-lapse video to get a sense of the scope. Last Friday a river of people flowed past the U.S. Capitol building on their way to the Supreme Court, marching on behalf of those whom Washington, D.C. has long treated as invisible. The 44th annual March for Life drew an immense crowd—hundreds of thousands commemorating the anniversary of the Roe v. Wade decision and for yet another year, praying for an end to abortion.

But this year, the mood was noticeably different. More hopeful. Even excited. As Vice-President Mike Pence said in his address to the crowd—the first ever from a sitting vice president—it was “the best day for the March for Life in more ways than one.”

So much has changed in the space of the last twelve months. I remember last year’s march under the clouds of a looming snowstorm and an uncertain legal future. More recently, the discouraging Supreme Court decision striking down common-sense safety regulations on Texas abortion clinics even had some in the media announcing “the end of the pro-live movement.”

It seemed, as a writer at Vox put it last year, “the culture wars are over and the winners are roaming the countryside looking for survivors to shoot.” How long ago that feels now with a pro-life majority in Congress, and a president who at least seems interested in keeping campaign promises to fight for the unborn. As Vice-President Pence told the crowd on Friday, “life is winning again in America.”

And then there was another speaker you might have heard of: a guy named Eric Metaxas, who contrasted the March for Life with the recent Women’s March which excluded pro-lifers. “This is the inclusive march,” he said, “where as long as you are alive and a human being, you are welcome!”

And then he did something that, to be honest, I think only Eric could pull off. He led the crowd in praying for Madonna, who topped the hysteria of other celebrities at the Women’s March by flinging profanities from the podium and saying she longed to blow up the White House.

“Jesus told us to pray for our enemies,” said Eric. “And we’re crazy! We do it!”

Eric’s theme was one I picked up on later that evening in my speech for the Evangelicals for Life conference. With the pro-life momentum in Washington, the temptation to look at those on the other side of this issue with contempt and even to seek revenge is going to be strong. But the response we must give is one of civility and gentleness.

Whether it was Eric, Vice-President Pence, or the hundreds of thousands of marchers invading the nation’s capital, I saw the best and brightest of the pro-life movement demonstrating love and compassion. Not only for the smallest victims of abortion, but for those taken captive by the hollow and deceptive philosophy of the pro-abortion movement.

Why civility? Well, certainly not because the other side reciprocates! And not because it’s “a winning strategy,” either. We do it because it’s right, because we embrace the core conviction that human beings are made in the image and likeness of God. We see our opponents in the abortion debate not as enemies to be defeated, but as victims themselves of bad ideas—captives that need to be set free.

As Vice-President Pence said, we want our movement to be known for “love, not anger…compassion, not confrontation.” That’s why we marched, and that’s why countless Americans will continue to descend on the capital year after year to make their voices heard until Roe v. Wade is overturned for the bad law it is and we see an end to the greatest injustice of our time. God willing, that day is near.