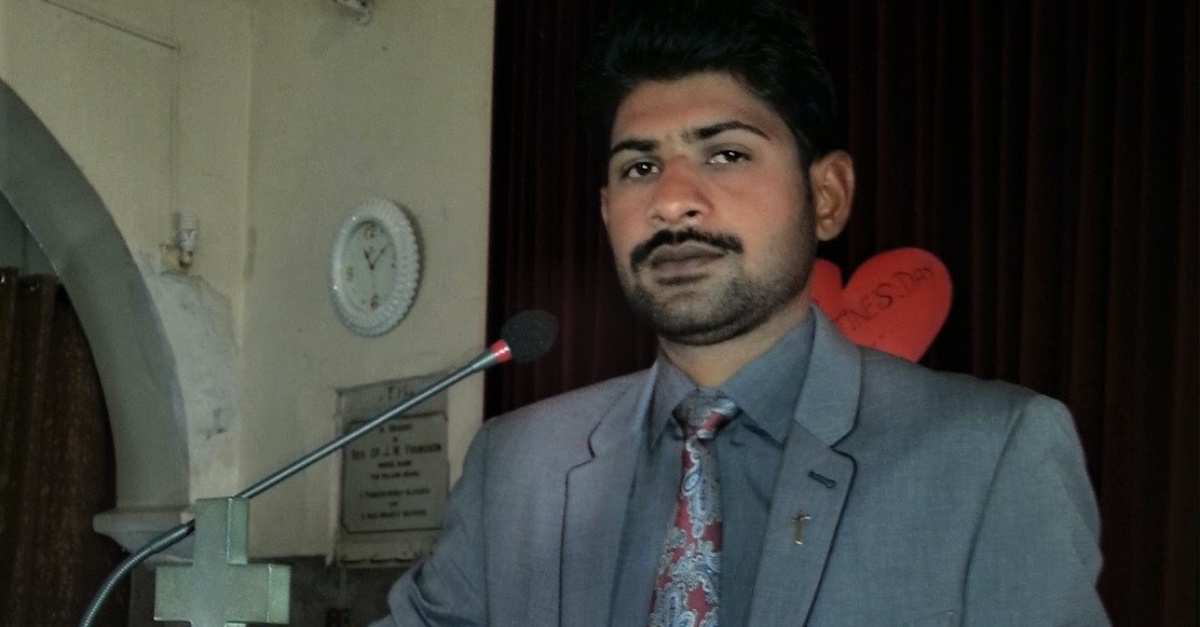 LAHORE, Pakistan, April 27, 2020 (Morning Star News) – Presbyterian assistant pastor Sarfaraz Raja was preparing to deliver a Good Friday sermon in Pakistan on April 10 when his brother informed him by phone that police had intruded into his house and were harassing his mother and other family members.

Upset that the pastor had complained of police misbehavior and knowing that Christians had little status in the 96-percent Muslim society, the officers were planning to frame him on trumped-up charges of making and selling liquor, sources said.

“I excused myself from the sermon and immediately rushed to my home accompanied by the village headman, Chaudhry Ranjeet Lal, and some other people,” said Pastor Raja of Youngsen Memorial Church in Youngsenabad village in Nankana District, Punjab Province.

They arrived to find Sub-Inspector Malik Shahbaz Ahmed and five other policemen in the courtyard threatening his mother and other family members, he said.

“I asked the police why had they entered my house without a warrant and were misbehaving with my family, at which point SI Shahbaz, instead of explaining the purpose of his raid, grabbed my collar and bundled me into their official vehicle amid protests by my family members and the village elders,” Pastor Raja said.

Police also arrested his uncle, Manzoor Raja, known as Kaali, who lives with the family, he said.

The pastor said that upon reaching the police station, officers took out liquor manufacturing equipment from a room and forcibly took the two men’s photographs with it. They then registered a case (No. 184/20) against them under anti-narcotics and illegal substance laws, accusing them of illegally manufacturing and selling liquor, he said.

He was released on bail the next day. Police falsely arrested him because he has complained about them protecting area criminals, the pastor said.

“Almost all crimes in our villages are backed by the local police,” he said.

The previous week, he had seen three young men scaling a wall of a government school for girls in front of his house late at night. All schools were closed to contain the spread of the novel coronavirus. He called police, and officers led by Shahbaz arrived and arrested the suspected thieves – releasing them without charges after taking them to the police station.

Pastor Raja informed the school principal, and she called the chief inspector of the police precinct, Muhammad Ali Chaddar, who summoned Shahbaz and demanded an explanation, the pastor said. Chaddar also sent officers to re-arrest the suspects, but the youths were again released by the police after a few hours on the grounds that they had only trespassed and had not stolen anything, Pastor Raja said.

He said his involvement and prior complaints of criminal activities had drawn the ire of Shahbaz, who then conspired to malign him by implicating him in a fake case.

“The entire village is sick and tired of the police high-handedness, but all our appeals for intervention of senior officials have gone in vain because we [Christians] are a weak community,” he said.

Villagers are standing by ready to vouch for him, he said, and the village headman, Lal, said he supported Pastor Raja.

“I along with several other elders of our village pleaded with the police not to tarnish the reputation of our pastor by framing him in a false case, but they threatened to arrest us as well,” Lal told Morning Star News. “We all have submitted written statements vouching for the pastor’s innocence to senior police officials, but no one is paying heed to our pleas.”

Lal, a member of the pastor’s church, said they would continue trying to clear their pastor’s name.

“This is sheer injustice of the state,” he said. “The police not only caused us anguish and pain by violating the sanctity of Good Friday, they have also shaken our faith in the constitution and law that assure us complete security of life and well-being as non-Muslim Pakistanis.”

Shahbaz denied to Morning Star News that a case against Pastor Raja had been concocted, though he later remarked that he was willing to make a “compromise” with the Christians if they withdrew their complaints to senior government and police officials regarding the arrest of the pastor.

Shahbaz claimed that a “secret informer” had told him that Pastor Raja and others were distilling liquor at his home. He acknowledged that police had no previous record of Pastor Raja being involved in any criminal activity.
“But I’m sure that the liquor is being prepared and sold in at least seven villages of the district under Raja’s supervision,” he said, without providing any evidence or witness testimony.

Islam forbids alcohol consumption, and only four private companies are licensed to produce and sell alcohol to non-Muslim Pakistanis.

Punjab Minister for Human Rights Ijaz Alam Augustine said that he had ordered an inquiry.

“Notables of the village informed me about the incident, and I have initiated an inquiry,” Augustine told Morning Star News. “I was appalled to know that police raided the village at a time when Christians were busy in Good Friday services in their churches and homes, and that too without any valid reason. I can assure that a thorough probe will be conducted, and those found guilty of misusing their authority will be subjected to departmental punishment.”