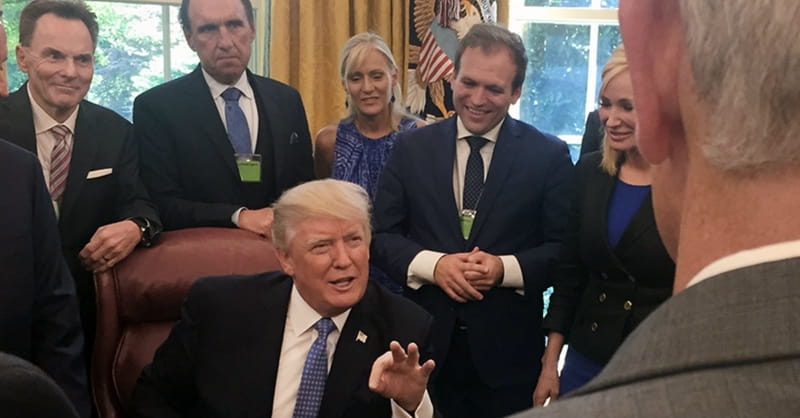 In a recent White House meeting in the Oval Office Pastor Mark Burns saved President Trump from a potential spider bite from a poisonous spider.

The Christian Post reports that a group of evangelicals had gathered in the Oval Office for a meeting with the President on December 11 when the incident occured.

Burns, the pastor of Harvest Praise and Worship Center in Easley, South Carolina, later posted a video, sharing how he saw a spider crawling up the President’s back during the meeting and knew he had to take action.

His instinct, he shares, was “kill the spider, protect Donald Trump.”

“I cannot stand spiders, I have always had a fear of spiders, but because it was the president of the United States of America, and I saw it running literally toward his neck," he continued.

Burns ended up slapping Trump on the back to kill the spider. He said everyone in the room initially looked shocked, wondering what had just happened.

He then held the spider up for everyone to see and joked “I saved you, Mr. President. I deserve a medal.”

Burns also said Trump did not flinch despite the unexpected slap and was a good sport about it. After realizing what had happened, everyone laughed.

It turns out that the spider was a yellow sac spider which is poisonous and “has mild and local cytotoxic and neurotoxic effects,” according to VenomousSpiders.net.