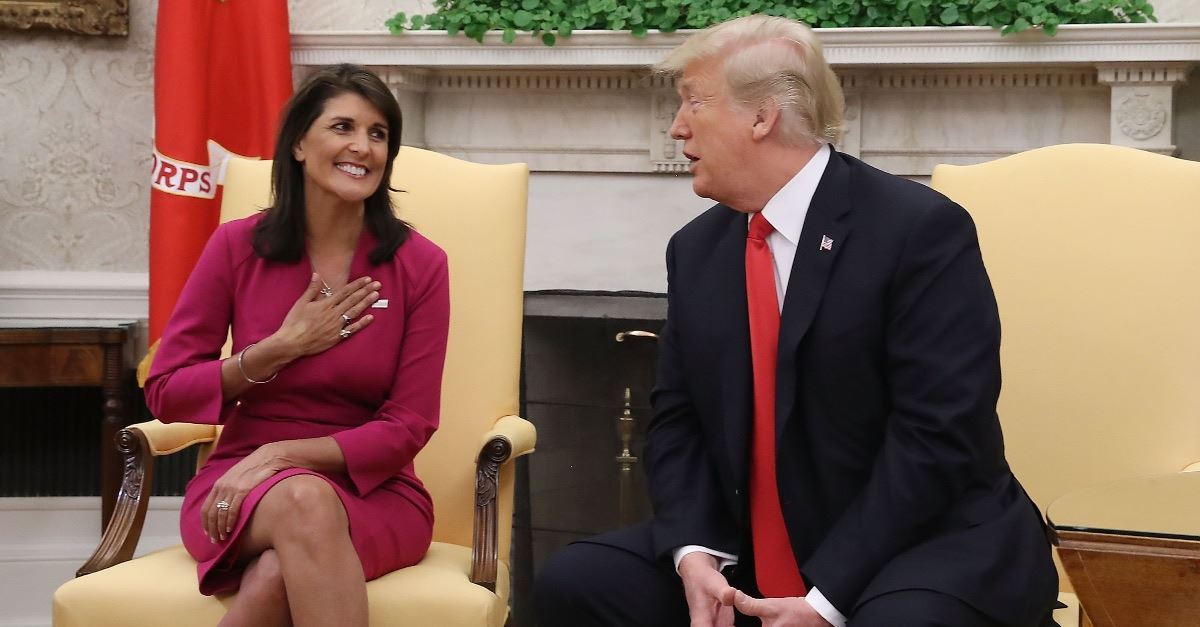 Ambassador to the U.N. Nikki Haley announced her resignation on Tuesday.

According to the Public Broadcasting Service, Haley did not give any reasons as to why she is leaving after only two years, but she has decided that she will be leaving the administration at the end of the year.

Many are speculating that though Haley, 46, is stepping down from her post come December, she will likely return to politics at some point in the future.

While announcing her resignation Haley squashed presidential candidacy rumors saying, “No, I’m not running in 2020.” She then noted that she will be campaigning for President Trump’s re-election.

Shortly after Haley announced her resignation, she met with the president in the oval office and together they spoke to the press. Haley expressed her gratitude to President Trump for being given the chance to defend America on the world stage, saying, together she and Trump “solved a lot of problems.”

The president then revealed that Haley had made him aware of her plan to resign several months ago, but the two chose to keep it under wraps. Trump went on to say that Haley “has been very special to me,” adding that she has done an “incredible job” in her time in office.

Haley was appointed as the American Ambassador to the U.N. in November 2016 and last month was responsible for coordinating Trump’s trip to the United Nations where he sat as the chair of the Security Council.

In the press conference on Tuesday, Haley said, “It was a blessing to go into the U.N. every day with body armor,” to defend America.

The daughter of Indian immigrants, Haley clashed with Trump over important issues such as immigration during the 2016 campaign cycle. Haley said of the president’s remarks on the issue that they were “the siren call of the angriest voices” who disrespected America’s immigrants. This made her an unlikely candidate for the president to appoint.

Following the anonymous op-ed published by the New York Times about President Trump, Haley wrote an op-ed herself which ran in the Washington Post. In her op-ed Haley wrote, “I proudly serve in this administration, and I enthusiastically support most of its decisions and the direction it is taking the country.” She added, “But I don’t agree with the president on everything.”

Nonetheless, during her tenure with the U.N., Haley was able to spearhead the Trump administration’s efforts to end what it saw as anti-American and anti-Israel actions by the international body.

Before she was appointed to her post at the U.N., Haley was elected the first female governor of South Carolina and was later re-elected in 2014. Haley is also one of the few prominent females in the president’s cabinet.

Trump has announced that he is considering many candidates to fill Haley’s job and that a successor will be named in two to three weeks.