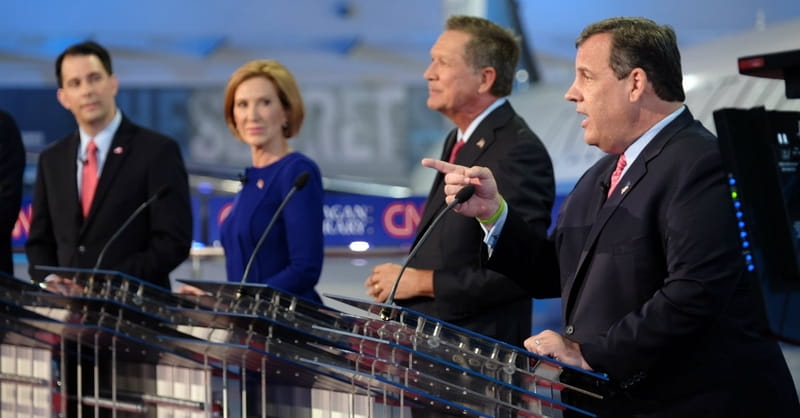 The second Republican primary debate was held last night and, according to many commentators and pundits, Carly Fiorina came out on top.

After fighting her way to the main debate stage with voters and by changing CNN rules, Fiorina rose to the occasion, handled the pressure and did not disappoint. She gave solid, detailed answers to questions about Iran, Middle East policy, drug use, her record at HP, and gave a passionate and timely answer to questions about Planned Parenthood funding.

Fiorina even took on Donald Trump, who has been leading the polls as the dominating contender.

Fox News contributor Erick Erickson noted that “Fiorina was the only person on the stage that Trump seemed fearful of.”

Trump himself didn’t pack as many punches as in the last debate. Erickson notes that “He repeatedly tried to land blows and with only a handful of exceptions, they fell flat.”

Commentator Charles Krauthammer gave Fiorina an A minus in the debate, stating that “These debates hinge on moments and she had two great moments.”

The two “moments” that Krauthammer was referring to was when Fiorina sparred with Trump concerning his previous attack of her when he stated, “Look at that face! Would anyone vote for that? Can you imagine that, the face of our next president?”

Fiorina, however, used the occasion to confront Trump. “Mr. Trump said he heard Mr. Bush very clearly and what Mr. Bush said. I think women all over this country heard very clearly what Mr. Trump said,” Fiorina stated to enthusiastic applause and in a manner Krauthammer termed “short, surprising, and really electric.”

Fiorina’s second moment, according to Krauthammer, was when she took on both Iran and Planned Parenthood. She was clear on what her policy would be concerning Iran, stating that, if elected, the first thing she would do would be to make two phone calls: one to Israel’s prime minister Benjamin Netanyahu to tell him the United States will stand with Israel and one to the Ayatollah Khamenei, Iran’s supreme leader, to tell him that unless he allows the United States to inspect Iran’s nuclear facilities, the U.S. will make it extremely difficult for Iran in the world market.

The other main issue Fiorina addressed along with Iran had to do with what she termed “the defense of the character of this nation.” She then gave a passionate “I dare you” to President Obama and Hillary Clinton to watch the undercover videos, showing Planned Parenthood employees callously discussing the sale of the body parts of live babies.

Krauthammer stated that most of the other candidates in the debate maintained the same approach as in the first round, but Fiorina clearly came out on top.

As Erick Erickson stated, The Republican Primary just got a lot more interesting.”