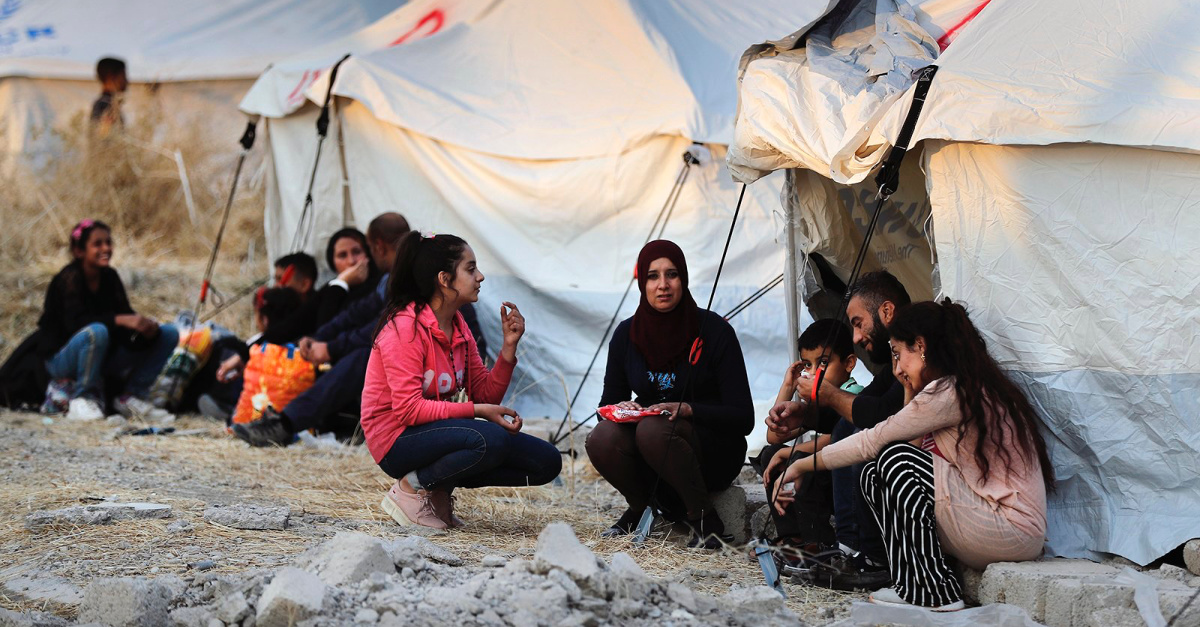 (RNS) — For years, Donald Trump and administration officials have championed protecting religious freedom abroad — including for Christians persecuted for their faith — as a key foreign policy goal.

But according to a new report released Friday (July 10) from two Christian groups, the president is falling short of that goal when it comes to Christian refugees.

“The number of persecuted Christians to whom protection is available through the U.S. refugee resettlement program and the application of asylum laws has still been dramatically curtailed,” the report reads.

Entitled “Closed Doors: Persecuted Christians and the U.S. Refugee Resettlement and Asylum Processes,” the report was prepared by World Relief and Open Doors USA — both organizations that work on issues of immigration and religious persecution.

Their findings focus on the Trump administration’s drastic cuts to the refugee resettlement program, which has long been run in partnership with several religious organizations — including World Relief, an evangelical Christian group. According to the report, there has been a 90% reduction since 2015 in the number of persecuted Christians resettled in the United States.

During former President Barack Obama’s last year in office, the annual limit on refugee resettlement was set at 110,000 people. That number was slashed to 45,000 shortly after Trump took up residence in the White House. It has been steadily reduced every year since: In fiscal year 2020, the ceiling was set at 18,000, the lowest in the program's history.

The reductions were widely opposed by progressive and conservative faith groups alike, and rumors of cutting the resettlement program altogether sparked responses from Republican lawmakers such as Sen. James Lankford.

“The US has a strong history of welcoming refugees, who go through the proper channels of admittance into the US, as they flee persecution," Lankford tweeted in 2019.

The cap changes have also resulted in a sharp decline in persecuted Christians admitted into the country as refugees, this despite years of lobbying on the issue by conservative Christian supporters of Trump such as Franklin Graham.

“There are about 250 million people who are experiencing severe levels of persecution for their faith in Jesus,” Open Doors USA CEO David Curry said during a call with reporters on Friday.

According to the report, the U.S. resettled 18,462 Christians in 2015 from countries on Open Doors' persecution watchlist. That number slipped to just 4,112 in 2018 before bumping up slightly to 5,787 in 2019. The administration has resettled just 946 persecuted Christians so far in 2020, due in part to complications from the ongoing global coronavirus pandemic.

Curry and World Relief CEO Tim Breene, who was also on the call, were quick to note that the issue doesn’t just impact Christians. The refugee caps also dramatically reduced the number of religious minorities from other faiths allowed into the U.S., they said, including many people facing systemic persecution.

“We're committed to the biblical teaching that all people are made in the image of God and are worthy of protection from persecution whether or not they are persecuted for their faith in Christ or another religious belief,” Breene said.

The report calls for the U.S. government to return to “at least a historically normal ceiling” for refugee resettlement, such as 95,000 refugees per year as recommended by the U.S. Commission on International Religious Freedom in 2019. In addition, the authors urge the Trump administration to reject proposed changes to existing immigration systems that would make it more difficult to attain asylum in the U.S.

The document implicitly calls into question Trump’s 2017 promise to assist persecuted Christians. When asked about the issue by the Christian Broadcasting Network, Trump said his administration would make responding to Christians fleeing persecution in Syria a priority.

“They’ve been horribly treated,” Trump said. He later added: “We are going to help them.”

Curry and Breene were careful not to criticize Trump directly during the call and pointed to instances where the Trump administration has taken some steps to assist persecuted religious minorities.

For example, Curry noted when Vice President Mike Pence personally intervened to dedicate U.S. Agency for International Development funds to better living conditions for religious minorities in northern Iraq. That move is part of a larger strategy aimed at improving the situation of persecuted Christians where they live instead of prioritizing refugee resettlement.

But when pressed about whether the Trump administration’s strategy tangibly benefitted the lives of persecuted Christians in their countries of origin, Breene acknowledged that despite the government’s “good” intentions, “it’s very rare to see material progress."

And even if conditions improve overseas, said Curry, Christians who have been displaced from their homes because of religious persecution still need help.

“This is a significant gaping hole in their strategy: that there are some people that are still in danger for their faith,” he said. “They’re not going to be able to move back home. If they could, they would.”

The United States, he said, has "long (been) a beacon of hope for those fleeing religious persecution ... We must change this policy and remain a leader for religious freedom."

“We are living in what St. John Paul II called a ‘new age of martyrdom,’ where many worldwide face persecution for their faith,” he said. “I pray our nation will reverse course and once again stand with refugees and asylum seekers, including those escaping religious persecution.”

Russell Moore, president of the Ethics & Religious Liberty Commission of the Southern Baptist Convention, urged his fellow Christians to “pay careful attention” to the findings of the report. He called on evangelicals to "recommit ourselves to ministering to all of those in our communities, and around the world, who are fearful for their very lives.”

Curry said his organization has already reached out to officials at the U.S. State Department and the National Security Council to draw their attention to the new report, and World Relief staff said they plan to send the report to members of Congress as well as Sam Brownback, the U.S. Ambassador-at-Large for International Religious Freedom. Several faith-based groups have also urged Congress to pass the GRACE Act, which would set the floor for refugees at 95,000.

“We're hopeful,” Curry said, “and really want to encourage them to step up and take some real significant steps towards addressing this refugee issue.”