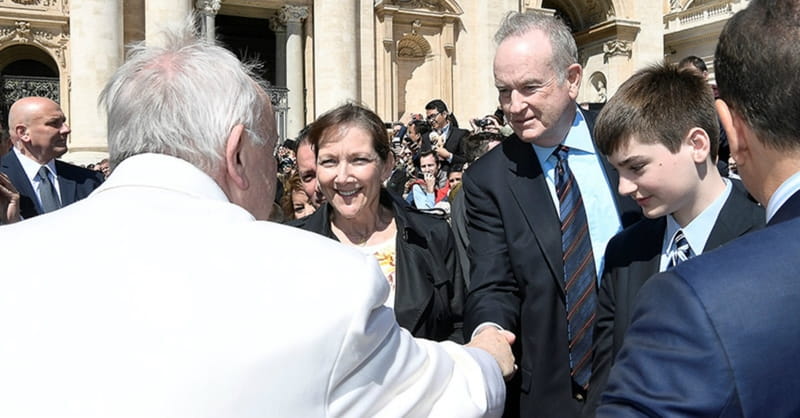 Hours before Bill O’Reilly’s ouster at Fox News was announced, the cable TV personality was greeted by Pope Francis on Wednesday (April 19) during the pontiff’s weekly audience in St. Peter’s Square.

O’Reilly, a Catholic, who last year challenged the pope’s views on immigration and promised to convince him of the need for reform, shook hands briefly with the leader of the world’s 1.2 billion Catholics at the Vatican.

But it’s unclear if Francis knew who O’Reilly was, and they appeared to exchange no conversation as O’Reilly joined VIPs in a suit and tie to greet the 80-year-old pontiff in the spring sunshine.

Earlier this month, The New York Times reported that Fox and O’Reilly paid five women, including former staffers and guests on his program, a total of $13 million to settle harassment claims.

O’Reilly’s picture was taken in the VIP line by a photographer from the official Vatican newspaper, L’Osservatore Romano. He has been on vacation in Italy.

Thousands of pilgrims and tourists gather in St. Peter’s Square for the papal audience, which is open to the public every Wednesday.

O’Reilly’s access did not appear to come with any assistance from the U.S. Embassy to the Holy See, and the head of the Vatican press office, Greg Burke, a former Fox correspondent, told RNS he did “not facilitate” O’Reilly’s visit.

The request is likely to have been cleared by the prefect of the papal household, Archbishop Georg Gaenswein, former personal secretary and friend of Pope Emeritus Benedict XVI.

The pope has made compassion for migrants a hallmark of his papacy, and in a broadcast aired last year O’Reilly said he personally wanted to convince Francis that millions of Americans had been harmed by the immigration system.

The pope angered then-candidate Donald Trump during last year’s presidential campaign when he appeared to question Trump’s desire to build a border wall with Mexico.

“A person who thinks only about building walls, wherever they may be, and not building bridges, is not Christian,” the pope said after a visit to Mexico. “This is not in the Gospel.”

In his message to the faithful on Wednesday, the pope referred to the resurrection of Jesus Christ at Easter, saying: “Even though we are all sinners,  we too can go to the tomb, see the stone rolled away and realize that God has an unexpected future for each one of us.”

During the pope’s 2015 visit to the United States, he met Kim Davis, a Kentucky clerk who became a conservative hero for refusing to sign same-sex marriage certificates, though it wasn’t clear he knew who she was.