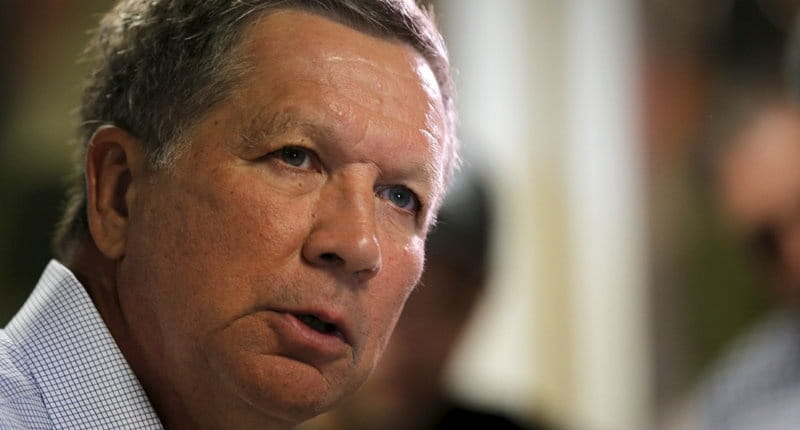 Ohio Republican Gov. John Kasich, a former altar boy who grew up to be an abortion opponent who backs the death penalty, threw his hat in the 2016 presidential race on Tuesday (July 21).

1. He started out Catholic, and the faith is “always going to be a part of me.”

In one of his two books about faith, values and politics, Kasich, 63, describes growing up as “a card-carrying Catholic” child of immigrants in “working-class church-abiding” McKees Rocks, Pa.

Kasich writes: “I drifted away from religion as a young adult. Then I looked up one day, and there was a huge hole in my life where God and religion had been.”

He turned back to faith after his parents were killed by a drunken driver. His 2010 book, “Every Other Monday,” gets its name from the biweekly Bible study he’s attended for two decades.

The book was panned by Publishers Weekly, which called Kasich’s approach to Scripture “therapeutic” and concluded, “The Christianity that emerges from these pages is tame and has nothing profound to say.”

Instead, Kasich writes: “He’s with me wherever I happen to be. I go to church because that’s what you do. I find God in the stories of the Bible, in the random acts of kindness I see every day, in the choices I make and the ways I interact.”

But he does belong to a church — St. Augustine in Westerville, Ohio, part of the conservative splinter group the Anglican Church in North America. The denomination broke away from the Episcopal Church after that denomination consecrated an openly gay bishop. The ACNA does not permit female bishops or ordain LGBT priests.

3. The Bible resonates with him.

“Greed and charity, ruin and redemption, misery and hope. It’s all right there. It’s accessible, and at the same time it’s beyond knowing, and I can’t for the life of me figure how anyone gets along without it,” he wrote in his 2006 book, “Stand for Something.”

4. He’s not afraid to lob Scripture at critics.

The Columbus Dispatch, covering his 2014 re-election campaign, noted that he “cites God regularly,” as when he justified the expansion of Medicaid to more than a quarter-million Ohioans.

Indeed, he felt free to stand up for that Medicaid expansion in a conference room full of Republican mega-donors last year. According to Politico, Randy Kendrick, a major donor whose husband owns the Arizona Diamondbacks, questioned the decision and Kasich’s God-based rationale.

Politico writes: “The governor’s response was fiery. ‘I don’t know about you, lady,’ he said as he pointed at Kendrick, his voice rising. ‘But when I get to the pearly gates, I’m going to have an answer for what I’ve done for the poor.'”

Kasich voted for the Defense of Marriage Act years ago and supported Ohio’s ban on gay marriage. But he was pragmatic after the Supreme Court ruling June 26 overturned state bans. Two days later, he was interviewed on “Face the Nation” and said: “I believe in traditional marriage, but the Supreme Court has ruled. It’s the law of the land, and we’ll abide by it. … It’s time to move on.”

He then called for conservatives to refocus on other urgent issues, such as jobs, national defense and “healing the division between races.”

Photo: Ohio Gov. John Kasich answers questions from reporters after a tour of the Red Hook Brewery in Portsmouth, N.H., on July 13, 2015.