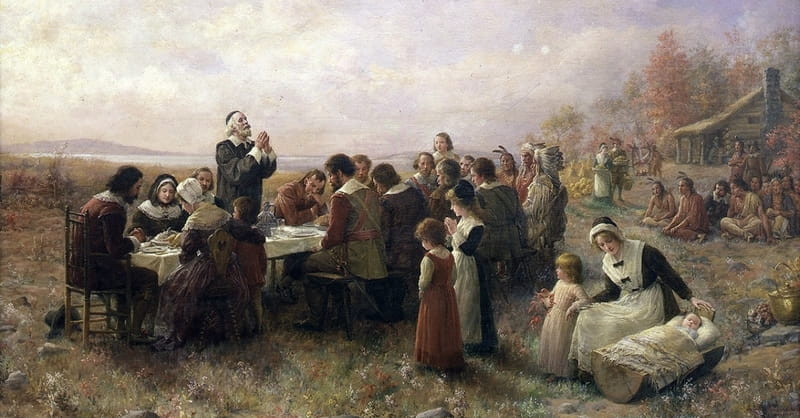 Responding to a request from Congress, President George Washington issued our nation’s first Thanksgiving proclamation in 1789. Only in the midst of the crucible of civil war, however, did presidential proclamations of Thanksgiving become customary. Every year since 1863 our chief executives have urged Americans to recognize God’s bounty and blessings on the fourth Thursday in November.

Several themes loom large in presidential Thanksgiving proclamations: the historical foundation of the event; God’s sovereignty and goodness; the many blessings God has bestowed on America; the importance of national and individual repentance; a challenge to share our copious blessings with other nations and the less fortunate at home; a call to honor the sacrifices of those, especially members of the Armed Forces, who have helped make America prosperous and powerful; and an exhortation to express our gratitude to God individually and collectively.

Numerous presidents have described America’s first Thanksgiving. Most have identified it as the feast the Pilgrims and Wampanoag Indians shared in Plymouth in 1621. Barack Obama, for example, declared in 2014 that “the friendship and kindness of the Wampanoag people” helped the Pilgrims learn “to harvest the rich bounty of a new world.” Some presidents, including John F. Kennedy, pointed to early 17th century events in both Massachusetts and Virginia as providing the foundation for Thanksgiving. In 1984, Ronald Reagan, by contrast, highlighted Iroquois thanksgiving festivals that predated those of Euro-Americans as the basis of the holiday.

Washington, Abraham Lincoln, and most other presidents have accentuated God’s power, providence, and generosity in their proclamations. Washington praised “the great Lord and Ruler of Nations,” acknowledged “the providence of Almighty God,” and thanked God for “His kind care and protection.” Lincoln emphasized “the ever-watchful providence of Almighty God.” Woodrow Wilson rejoiced in 1918 that “God, the ruler of nations,” had brought an end to World War I.

In their Thanksgiving statements, presidents have also consistently expressed gratitude to God for His countless blessings. Washington established the pattern by thanking “the beneficent author of all … good” for the successful conclusion of the Revolutionary War and the new nation’s “tranquility, union, and plenty,” peaceful relations with other countries, recently adopted Constitution, and religious and civil liberty. In 1865 Andrew Johnson rejoiced that God had removed “the fearful scourge of civil war” and permitted Americans to enjoy “the blessings of peace, unity, and harmony.” Harry Truman urged citizens in 1945 to thank “Almighty Providence” for America’s “abundance, strength, and achievement” evident in its defeat of “German fascism and Japanese militarism.” In 2003, George W. Bush praised God for America’s “abundance, prosperity, and hope” and its “firm foundation of freedom, justice, and equality” and “belief in democracy and the rule of law.”

In addition, presidents have called for corporate and individual repentance. Washington beseeched God “to pardon our national and other transgressions.” Lincoln urged Americans to bow before God in “humble penitence for our national perverseness and disobedience.” Andrew Johnson urged citizens to confess their “national sins” against God’s “infinite goodness.” Wilson exhorted Americans to seek “divine mercy and forgiveness for all [our] errors of act or purpose.”

Presidents have also used their proclamations to ask God to bless other countries and to prod citizens to generously aid others. Washington beseeched God to “protect and guide” all nations and “to bless them with good governments, peace, and concord.” Kennedy implored Americans to share their blessings and ideals with people around the world. Reagan exhorted citizens to model God’s “compassion for those in need” by sharing “our bounty with those less fortunate.” George H. W. Bush urged Americans to aid the unemployed, homeless, hungry, sick, and lonely. Obama challenged citizens to fulfill their role as their “brother’s and … sister’s keepers” by working at homeless shelters and soup kitchens.

In their proclamations, our chief executives have accentuated the sacrifices many American have made to protect and strengthen our nation. Let us “rededicate ourselves to those high principles of citizenship,” Truman declared in 1945, “for which so many splendid Americans have recently given all.” “Throughout history,” George W. Bush asserted, “many have sacrificed to preserve our freedoms and to defend peace around the world.” Obama paid tribute to “all those who defend our Union as members of our Armed Forces.”

As our presidents remind us, America has been abundantly blessed. Jesus declared that “to whom much is given, of him much shall be required” (Luke 12:48). May remembering this make us truly thankful and prompt us to aid the needy and vulnerable.