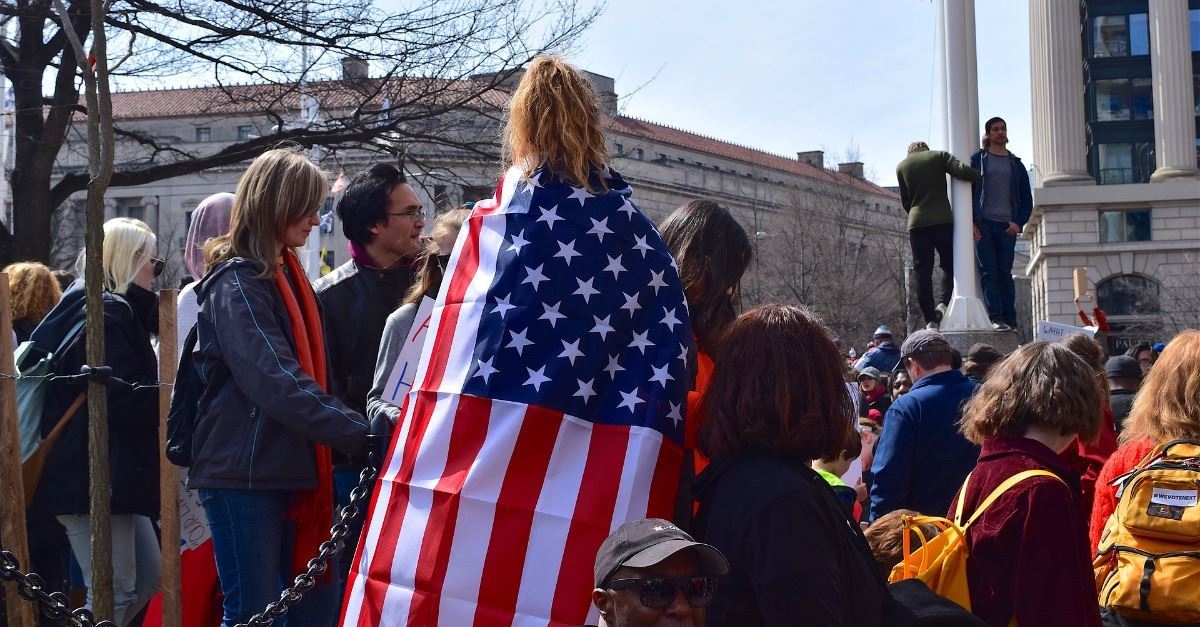 Nathan Phillips is a Native American who attended the Indigenous Peoples March in Washington last Friday. He told the Washington Post that he was there to beat his drum while urging participants to “be strong” against colonialism.

According to Phillips, a throng of young, mostly white teenage boys, several wearing “Make America Great Again” caps, swarmed around him and began to chant, “Build that wall, build that wall.” One of them “blocked my way and wouldn’t allow me to retreat,” Phillips said.

He told the Detroit Free Press a different story. This time, he said that the students became upset by a group of Black Israelites. “They were in the process of attacking these four black individuals,” he said. So, “I put myself between beast and prey. These young men were beastly and these old black individuals was their prey.”

Phillips stated that the students had a “mob mentality” that was “ugly, what these kids were involved in. It was racism. It was hatred. It was scary.”

Video of the event went viral. News outlets around the country condemned the students. One image of a student with a Make America Great Again cap smiling at Phillips became an icon for the event. Filmmaker Michael Green tweeted: “A face like that never changes. This image will define his life. No one need ever forgive him.”

Now we know the rest of the story.

“I am being called every name in the book”

Longer videos emerged showing that the incident actually started with Black Hebrew Israelites (BHI) members. According to Christian apologist Ryan Turner, this group believes that black people are the true Israelites from the tribe of Judah.

In their view, white people are “conspirators who attempt to persecute the black people and hide their true identity as Israelites.” Many view white people as “almost subhuman” and are known for shouting profanity and condemning people for their allegedly false beliefs.

When BHI members began shouting racial slurs at the students, they asked their chaperones for permission to “begin our school spirit chants” to drown out the hecklers.

According to Nick Sandmann, the student in the now-viral photo, Phillips then came toward the group with his drum. He “locked eyes with me and approached me, coming within inches of my face” and “played his drum the entire time he was in my face.”

Sandmann states, “I did not witness or hear any other students chant ‘build that wall’ or anything hateful or racist at any time. Assertions to the contrary are simply false.” Videos from the event bear out his statement.

Sandmann adds: “I am being called every name in the book, including a racist, and I will not stand for this mob-like character assassination of my family’s name. . . . One person threatened to harm me at school . . . My parents are receiving death and professional threats because of the social media mob that has formed over this issue.”

The Catholic school which Sandmann and the other students attend closed yesterday “due to threats of violence.”

Is racism still a “major problem” in America?

We could discuss the media bias reflected by coverage of this story, but that’s an issue I hope to address in tomorrow’s Daily Article. For today, I’d like to focus on the racism inherent in the event and its coverage.

BHI members assumed the white students were racist because they were white. Some in the media did the same, apparently because the students were wearing Make America Great Again hats and one seemed to be confronting a non-Anglo man.

According to a recent poll, 64 percent of Americans believe racism is a “major problem” in America. While only 7 percent of white Americans say they have been treated unfairly in a store or restaurant based on their race, 40 percent of black Americans have experienced such discrimination.

In a culture with such a persistent problem with racism, it’s unsurprising that many would assume racial prejudice in the students at the Washington event.

But that’s unfair, both to the students and to the larger narrative we need to address.

God’s word clearly calls us to love every person as unconditionally as he loves us (John 13:34; Galatians 3:28). It is obviously wrong to assume racial motives in others while ignoring them in ourselves. Instead, we should take three biblical steps:

One: Search our own heart. Racism is a way to feel superior to others, a temptation we all face. Ask the Spirit to show you any attitudes, assumptions, thoughts, words, or actions that are racist (John 16:8).

Two: Take the cultural initiative. Choose proactive, positive steps to be the salt and light Jesus calls us to be (Matthew 5:14-16). Build relationships across racial and cultural divides to incarnate the holistic love of Jesus.

Three: Be the church. Legendary Dallas pastor Tony Evans: “One of the real tragedies today is that the Church as a whole has not furthered God’s light, equity, love and principles in our land in order to be a positive influence and impact for good in the midst of darkness, fear and hate.”

Dr. Evans is right. Condemning the racial divisions in our culture is not enough. We must each do what we can to bridge them personally.

What is God’s next step for you?

NOTE: For more on today’s topic, please see my paper on our website, Racism in America: It’s time for the church to be the church.