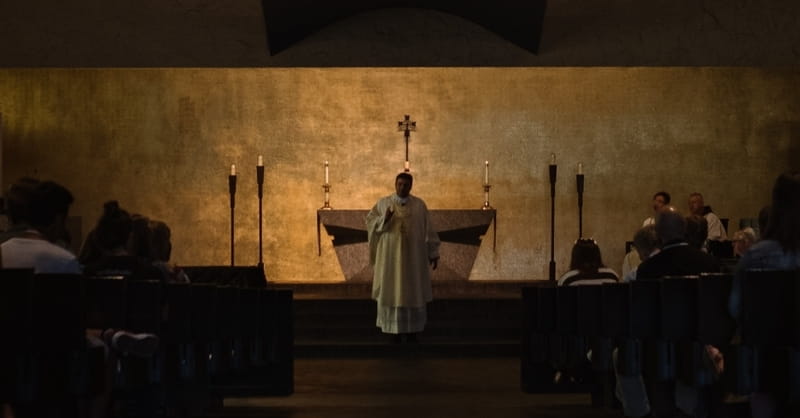 The Roman Catholic priest stands accused of financial theft and sexual abuse. Earlier this summer, his diocese reached a financial settlement with three males who accused him of molesting them when they were teenagers.

Paredes was suspended in June 2017. Earlier this year, church officials lost touch with him. They sent certified letters to him and went to his house but could not find him.

Is the pope facing a “watershed moment”?

Father Paredes is just one example of the sexual abuse scandal enveloping the Roman Catholic Church. This morning’s Washington Post carries a headline asking if Pope Francis is facing a “watershed moment” for his handling of the crisis.

Princeton legal scholar Robert George, who is Catholic, asked recently in the Wall Street Journal, “Is it time for Pope Francis to resign?” The Journal reports that US bishops are deeply divided over the pope’s handling of the crisis.

Whatever our view of the pope’s response, we would all agree that abusing even one child is an unspeakable sin that deeply grieves the One who loves and welcomes children (Matthew 19:13-15) and denounces all who harm them (Matthew 18:5-6).

There is another issue at work here as well. To the degree that Catholic officials protected the institution of the church rather than those it is called to serve, they committed the sin of idolatry.

Tragically, they are not the first to commit this sin. Nor is this sin limited to Catholic officials.

“He burned the house of the Lord”

“In the fifth month, on the tenth day of the month–that was the nineteenth year of King Nebuchadnezzar, king of Babylon–Nebuzaradan the captain of the bodyguard, who served the king of Babylon, entered Jerusalem. And he burned the house of the Lord, and the king’s house and all the houses of Jerusalem; every great house he burned down” (Jeremiah 52:12-13).

The “house of the Lord” had been built by Solomon five centuries earlier. At its construction, the God whom it honored warned his people: “If you turn aside and forsake my statutes and my commandments that I have set before you, and go and serve other gods and worship them, then I will pluck you up from my land that I have given you, and this house that I have consecrated for my name, I will cast out of my sight, and I will make it a proverb and a byword among all peoples” (2 Chronicles 7:19-20).

Because they refused to abandon their idolatry, the Lord abandoned their temple. What does this event in 586 BC say to us today?

The heart of the Christian life

Human nature does not change. What tempted the Jews and led to the loss of their temple still tempts us today.

You and I are not likely to bow before images of Baal or other Canaanite idols. But anything or anyone we value more than we value God is our idol.

At its heart, idolatry is loving anyone or anything more than we love Jesus (Matthew 22:37). When we love him personally, intimately, and sacrificially, everything else takes its proper place like spokes in the hub of a wheel.

If we truly, deeply love Jesus, we will love what he loves and hate what he hates. The heart of the Christian life is Christ.

“He seems to know God”

The funeral of Sen. John McCain on Saturday was a rare show of bipartisanship in our nation’s capital. The service sparked for me an interest in a minister whose work in Washington was similarly revered.

I had long known Peter Marshall’s life story–an immigrant Scottish laborer who rose to become pastor of New York Avenue Presbyterian Church in Washington and chaplain of the US Senate. But I had never read his widow’s acclaimed biography of this great man. So I took time during yesterday’s holiday to meet A Man Called Peter, as Catherine Marshall titled her remarkable narrative.

I discovered the singular trait that most empowered Peter Marshall’s astonishing ministry: the sense that he knew God. So many across his ministry testified that they came to hear him preach because they felt that he had an intimate relationship with Jesus and wanted what he had.

A newspaper reporter quoted a store clerk who heard Marshall preach and said, “He seems to know God, and he helps me to know Him better.”

If you feel a stirring in your soul this morning to know Jesus better, perhaps this prayer by Peter Marshall expresses words you’d like to pray:

Help us now to be as aware of Thy nearness as we are of the material things of every day. Help us to recognize Thy voice with as much assurance as we recognize the sounds of the world around us.

We would find Thee now in the privacy of our hearts, in the quiet of this moment. We would know, our Father, that Thou art near us and beside us, that Thou dost love us and art interested in all that we do, art concerned about all our affairs.

May we become aware of Thy companionship, of Him who walks beside us.

At times when we feel forsaken, may we know the presence of the Holy Spirit who brings comfort to all human hearts when we are willing to surrender ourselves.

May we be convinced that even before we reach up to Thee, Thou art reaching down to us. These blessings, together with the unexpressed longing in our hearts, we ask in the strong name of Jesus Christ, Our Lord. Amen.