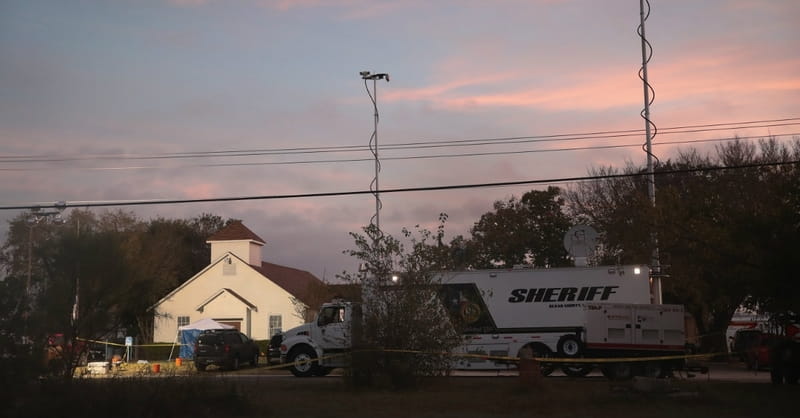 Among the members killed was Pomeroy’s fourteen-year-old daughter, Annabelle.

The church plans to hold a memorial tomorrow to honor the victims and survivors. The congregation will then transition into a groundbreaking ceremony for its new sanctuary. It will be built next to the old church, which currently and forever will serve as a memorial for their lost loved ones.

The new church will be built of stone, symbolizing the strength of the congregation and community.

Their church’s remarkable ministry to their grieving people is just one example of Christians acting as salt and light (Matthew 5:13-16). There were many others yesterday. Those who organized the National Day of Prayer expected some forty thousand events to mark the day across the country.

How much does religion contribute to our economy?

President Trump signed an executive order yesterday creating the White House Faith and Opportunity Initiative. The order was signed in the Rose Garden, attended by his cabinet members and some two hundred religious representatives.

Previous administrations created similarly named offices to foster partnerships between religious organizations and the government. The Faith and Opportunity Initiative will provide policy recommendations on “more effective solutions to poverty” and inform the administration of “any failures of the executive branch to comply with religious liberty protections under law.”

Are you wondering whether religion offers tangible benefits worthy of such recognition?

A recent study by Georgetown University found that the faith sector contributes $1.2 trillion to the US economy. That’s more than the combined revenue of the top ten technology companies in the country, including Apple, Amazon, and Google.

Is religion a product of evolution?

For instance, an evolutionary biologist named Bret Weinstein is convinced that there is no such place as heaven. He asserts, however, that believing in heaven keeps our descendants in good standing in our religious community, setting our lineage up to continue. Thus, belief systems are “literally false and metaphorically true.”

In response, I would note that his argument offers no evidential basis as a truth claim. He is asserting a secular faith proposition as he denies the truthfulness of religious faith propositions.

A University of Connecticut anthropology professor named Dimitris Xygalatas offers a different skeptical view. He claims that early societies were so small, their members could rely on each other’s reputations to decide whom to trust. In this era, the ancient Greek gods could be worshiped even though they had no interest in people’s personal conduct.

As human societies grew larger, they needed faith in all-knowing, all-powerful gods who would punish moral transgressions. Thus, the evolution of the gods of Judaism, Christianity, and Islam, among others.

However, his argument suffers a fatal historical flaw. Judaism began centuries before Greek mythology and has always centered on objective morality. Islam began among tribal cultures rather than large cities and cultures.

The professor also cites studies claiming that religious activity does not promote moral behavior. However, he makes no distinction between the various world religions and a personal, transformational relationship with Jesus Christ.

Who is on trial?

Despite yesterday’s White House initiative, I am seeing greater skepticism and opposition to religion in general and Christianity in particular than at any time in my life.

How should we respond? By remembering who is on trial.

When Paul stood before Festus and King Agrippa, he turned his personal peril into an opportunity for the gospel. After sharing his salvation story, he defended the gospel so effectively that the king cried, “In a short time would you persuade me to be a Christian?” (Acts 26:28).

The apostle responded, “Whether short or long, I would to God that not only you but also all who hear me this day might become such as I am–except for these chains” (v. 29). He knew that the person in danger was not himself but those before whom he was being tried.

It is the same with critics of our faith. Rather than becoming defensive, we should remember whose immortal soul is in peril. We can then explain and defend our faith with the confidence that the Holy Spirit is using us in ways we may not be able to measure on this side of heaven (Luke 12:12).

If you were a physician and your patient rejected your lifesaving diagnosis and treatment, you could let your critic die to prove you were right. Or you could respond to rejection with mercy, doing all you could to save your dying patient.

Which would you choose?

Photo: Law enforcement officials continue their investigation at First Baptist Church of Sutherland Springs as the sun begins to rise on November 6, 2017 in Sutherland Springs, Texas. Yesterday a gunman, Devin Patrick Kelly, killed 26 people at the church and wounded many more when he opened fire during a Sunday service.