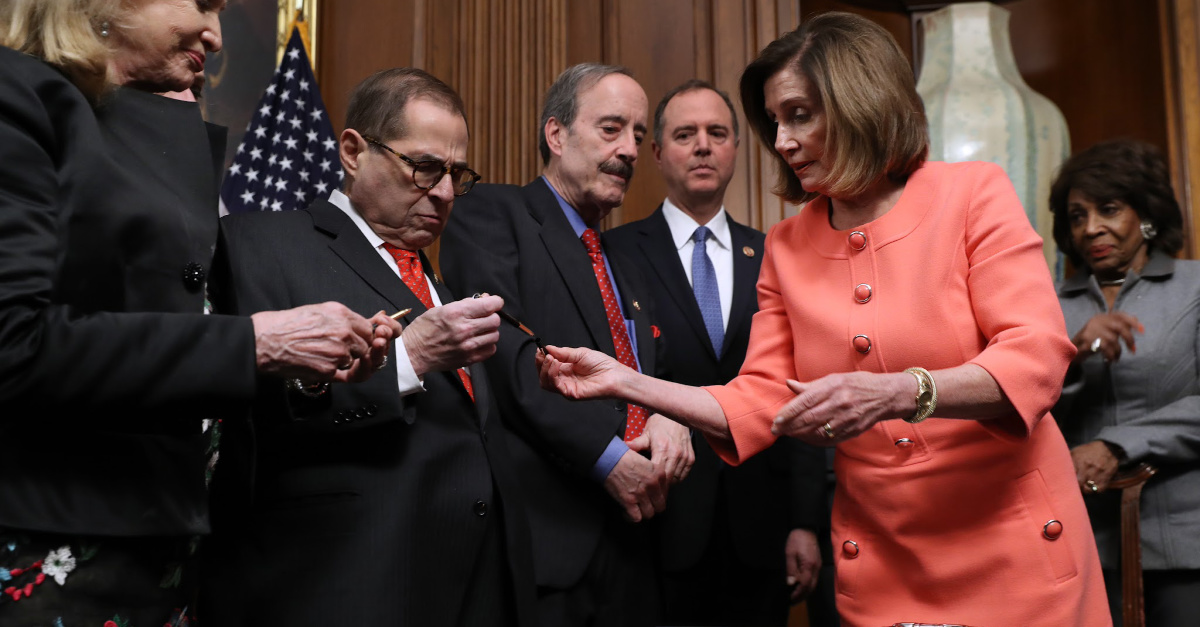 In between, the House conveyed articles of impeachment to the Senate. Republicans were upset that House Speaker Nancy Pelosi distributed souvenir pens she used to sign the articles. In response, Pelosi’s chief of staff said it is “tragic that the President’s attacks on our Constitution have brought our country to this point.”

It is as though two governments are at work in Washington.

When I was a professor of philosophy of religion, I worked with “channels of epistemology”—ways we know what we know. They can be seen as three lanes on a freeway: the rational, the practical, and the intuitive.

We perform mathematical calculations rationally, we use our computers practically (unless we’re computer engineers, in which case we use them rationally), and we like people intuitively. We all do all three, but one “channel” tends to dominate our personality.

It seems our culture is in an intuitive chapter of our history. Our founders built our nation on highly reasoned principles derived from the Judeo-Christian worldview and the Enlightenment. During times of global war or economic crisis, we have been driven by pragmatic responses.

Today, in a postmodern culture that is convinced all truth is personal and subjective, we measure life through our feelings and passions.

“Democracy and the decline of reason”

This is the thesis of William Davies’s important study, Nervous States: Democracy and the Decline of Reason. Davies observes: “Experts and facts no longer seem capable of settling arguments to the extent that they once did. Objective claims about the economy, society, the human body and nature can no longer be successfully insulated from emotions.”

He illustrates: “In 82 percent of countries around the world, less than half of the public express trust in media, and this is contributing directly to rising cynicism toward governments. The governmental institutions of the European Union and Washington, DC, are viewed as centers of elite privilege, which serve themselves rather than the public.”

One factor is the speed at which we want to receive information. Trusting experts, whose work takes time, is less appealing than accessing the world through the internet. Davies cites a 2017 survey which found that more people were willing to trust search engines than human editors.

A second factor is our reliance on popular trends. Google and Twitter don’t produce or report facts—they report what is trending. Mass demonstrations, whether in Iran, Hong Kong, or Times Square, convey what Davies calls “the depth of feeling that brought so many people into one place at a time.” What is trending must be true, or so we think.

A third factor is the degree to which many people do not feel represented by their leaders or the so-called experts. Stock market highs ring hollow to those struggling to get by. Proclamations of social progress frustrate those who feel left behind.

Are these facts related?

Feelings are the facts of our day, but are they the best test for right and wrong?

Consider an example: Today’s television programming is full of references to alcohol and depictions of drinking. In one study, alcohol was found to comprise 30 percent of all food and beverages portrayed.

This despite research indicating that portrayals of alcohol consumption on TV and in movies contribute directly to increased alcohol consumption by viewers. Perhaps we should not be surprised by this frightening report: “The number of Americans drinking themselves to death has more than doubled over the last two decades.”

More than a quarter of Americans now see themselves as “spiritual but not religious.” Fewer than that percentage believe the Bible to be the literal word of God. At the same time, 62 percent of Americans are dissatisfied with the direction of our culture.

Are these facts related?

Consider this fact: “All Scripture is breathed out by God and profitable for teaching, for reproof, for correction, and for training in righteousness” (2 Timothy 3:16).

“Teaching” refers to doctrine, “reproof” to exposing error in light of doctrinal truth, “correction” to guidance back to the right path, and “training in righteousness” to “a system of discipline that leads to a holy lifestyle” (New American Commentary).

If we will study and submit to God’s word, we will become “competent, equipped for every good work” (v. 17). Living biblically prepares us to serve Jesus in every dimension of our lives and world.

You and I can live by our feelings as fallen, finite human beings. Or we can live by the facts of biblical truth.

Where are you facing this choice today?