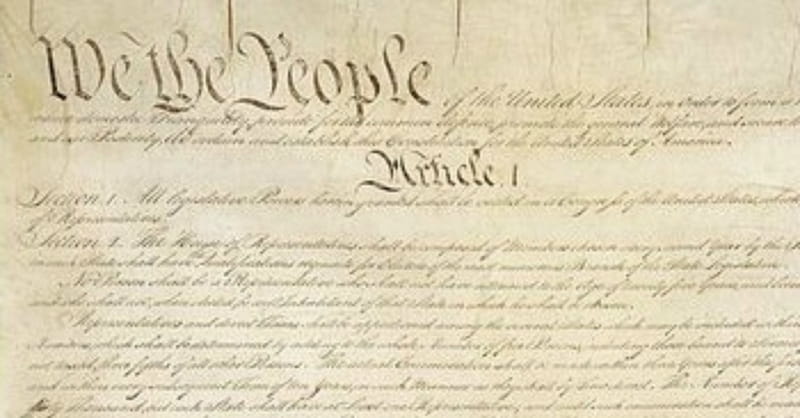 The U.S. Constitution is one of the most remarkable legal documents in history. And it’s not just because of its understandability or that it has survived the test of time. It’s because it’s based on a realistic view of human nature and a reverence for human rights.
But over two-hundred and twenty years later, “We, the People” have largely forgotten these truths, and we ignore the document that enshrines them. According to the Annenberg Public Policy Center at the University of Pennsylvania, only 36 percent of Americans can name all three branches of government—and just as many couldn't even name one! And according to the American Council of Trustees and Alumni, a third of college graduates can’t identify the Bill of Rights, and one in ten thinks Judge Judy sits on the Supreme Court!
Our ignorance of the Constitution and civics in general may sound funny, but it’s not when it comes to our freedoms. Two appalling overreaches by the Supreme Court this summer show the consequences of an uninformed population. As Justice Scalia wrote in his dissent from Obergefell v. Hodges, the Court has seized “legislative—indeed, super-legislative—power; a claim fundamentally at odds with our system of government.”
Well, Princeton professor of jurisprudence, and this past year's Wilberforce Award winner, Dr. Robert George, suggests in a video for Prager University that we must re-educate ourselves on the Constitution or we will lose more freedom.
In the video, which we'll link to at BreakPoint.org, Dr. George identifies a misunderstanding of the Constitution that’s been especially damaging: the idea that the Supreme Court’s power to enforce the Bill of Rights is the main way that the Constitution protects liberty.
That’s seriously mistaken. In reality, the first ten Amendments were hotly debated at the Convention in 1787. Many of the founders feared that tacking a list of rights onto the Constitution would give Americans the impression that these were their only rights. They were so worried about this, they added the Ninth and Tenth Amendments to remind us that it's the government’s powers that are enumerated in the Bill of Rights, not ours.
But in 2015, after our High Court has effectively legislated healthcare policy, abortion, and “gay marriage,” it’s clear the framers’ fears were well-founded.
“Most Americans think of the Supreme Court as the ultimate arbiter of almost every social and political dispute,” says Dr. George. “The founders never envisioned the court in this role.”
Widespread ignorance of the Constitution makes this mess possible. But Chuck Stetson thinks education about the Constitution and America’s founding can reverse the damage. Stetson has launched a bipartisan initiative to re-acquaint Americans with our founding charter. It’s called the National Constitutional Literacy Campaign, and its aim is to get American families, schools, and churches to take civics education seriously once again.
Over twenty organizations have joined the effort so far, including non-profits like the Constitution Bee, the Intercollegiate Studies Institute, Hillsdale College, The Washington Times, and Stetson’s own Essentials in Education. Appropriately, they’re launching the campaign tomorrow, which is the anniversary of the signing of the Constitution. They’ve assembled an impressive library of free resources at their website, which I’ll link you to at BreakPoint.org. There’s something there for everyone—grade-school, teenagers, college students, and adult learners alike.
As Christians, civic education is a primary component of how we, the citizens of the kingdom of God, can be the best citizens in the kingdom of man. And as Americans, we need to understand the foundations of liberty, and where our rights come from. Lord willing, we can do more than get Judge Judy out of the Supreme Court. We can actually bring the Constitution back into the lives of the American people.
BreakPoint is a Christian worldview ministry that seeks to build and resource a movement of Christians committed to living and defending Christian worldview in all areas of life. Begun by Chuck Colson in 1991 as a daily radio broadcast, BreakPoint provides a Christian perspective on today’s news and trends via radio, interactive media, and print. Today BreakPoint commentaries, co-hosted by Eric Metaxas and John Stonestreet, air daily on more than 1,200 outlets with an estimated weekly listening audience of eight million people. Feel free to contact us at BreakPoint.org where you can read and search answers to common questions.