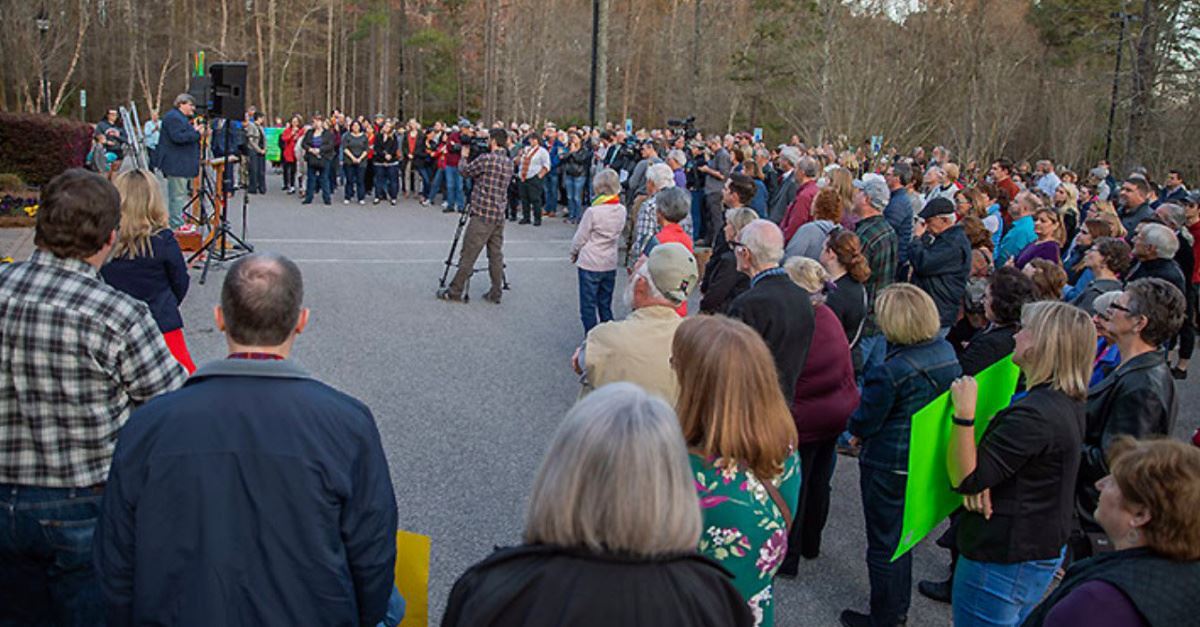 (RNS)  — On Thursday evening last week, 300 United Methodist clergy and laypeople gathered outside their denomination’s regional headquarters in Garner, N.C., to protest a recent vote that bans LGBT people from marriage and ordination.

Their protest was one of many.

Across the country, from Iowa to Michigan and Texas to Wisconsin, thousands of United Methodists who support LGBT rights are rising up to denounce the denomination’s recent decision to strengthen its ban on gay clergy and same-sex weddings.

These United Methodists are signing petitions, taking out newspaper ads and, in some cases, withholding their dues to the denomination.

They are also plotting a way out.

On Thursday (April 4), a group of 30 clergy, bishops and activists led by megachurch pastor Adam Hamilton will gather in Decatur, Ga., to strategize a future for those churches that feel they cannot remain in a denomination that denies LGBT rights. The group met last week in Dallas and has already planned a longer two-day meeting at Hamilton’s 22,000-member Church of the Resurrection in Leawood, Kan., next month.

The conflict may have already hurt the denomination financially. Receipts from member churches, called apportionments, are down 15.6 percent so far this year compared with 2018. Receipts in March alone — one month after the special General Conference in which the church voted to strengthen LGBT restrictions — were down 20 percent over March 2018, according to financial reports posted by the denomination online.

Churches such as Open Table, a Raleigh, N.C., congregation, with about 30 active LGBT members, will be looking to Hamilton and other leaders for guidance. They are also awaiting a decision by the denomination’s top court on the constitutionality of the recent vote to strengthen rules against LGBT people.

“We want to be ready to move in whatever direction we need to move when those things come,” said the Rev. Jason Butler, the church’s pastor.

Butler called the restrictions on LGBT people that the denomination adopted in February “untenable.”

“From our standpoint, we won’t live under the Traditional Plan or follow its rules,” he said, referring to the name of the plan adopted by delegates at the global gathering in St. Louis.

The special session of the United Methodist Church General Conference met Feb. 23-26 and voted 438-384 to strengthen enforcement of the denomination’s rules against ordination and marriage of LGBT members and punish clergy who violate those rules.

Church leaders think a majority of American delegates voted against the plan. But because United Methodists are a global church and about 45 percent of the denomination’s 12.6 million members are in Africa or Asia, the U.S. contingent did not prevail.

While African and Asian Methodists take far more conservative views on sexuality and gender, those in the U.S. have become increasingly supportive of LGBT people.

A recent PRRI poll found that 62 percent of Americans — and 68 percent of white mainline Protestants — say gay and lesbian couples should be allowed to marry legally. That’s a 10 percentage point increase from three years ago. Same-sex marriage has been the law of the land since a 2015 Supreme Court ruling that such couples have a constitutional right to marry.

Methodists across the United States have for years defied rules that forbid clergy from marrying same-sex couples and ordaining them. In 2016, United Methodists in Colorado, Montana, Utah and Wyoming elected a bishop who is a lesbian.

Those Methodists are not about to back down.

James Howell, pastor of the one of the nation’s largest United Methodist churches, Myers Park in Charlotte, N.C., made that clear in a video he posted to his church’s YouTube channel last week.

“It’s time for some kind of separation, some kind of amicable divorce,” he said in the video. “This Traditional Plan, its goal clearly is to stamp out homosexuality in the church. They wish to be rid of centrists, moderates, certainly progressives, but even thoughtful conservatives.”

Bishop Sue Haupert-Johnson of the North Georgia Annual Conference, who will host Thursday’s gathering, said as much.

“I think we’ve learned there’s not much future in this polity if we have folks unwilling to look at what’s going on in the United States context,” she said.

That’s not to say a split is imminent, or even settled. Supporters and opponents of LGBT inclusion acknowledged they are talking to each other.

He would not name names.

“It’s a broadly representative group of respected leaders in the church on both sides of the conflict,” Boyette said.

Meanwhile, the denomination’s coffers may continue to suffer. Some churches may be withholding their dues to the national church as a form of protest, said Howell, though he noted that his is not.

“People are not at all happy with money going to support a denomination they feel is at odds with what we want to be about,” he said. “They’re going to ask: Why are we investing in a church that is viciously opposed to what we support?”