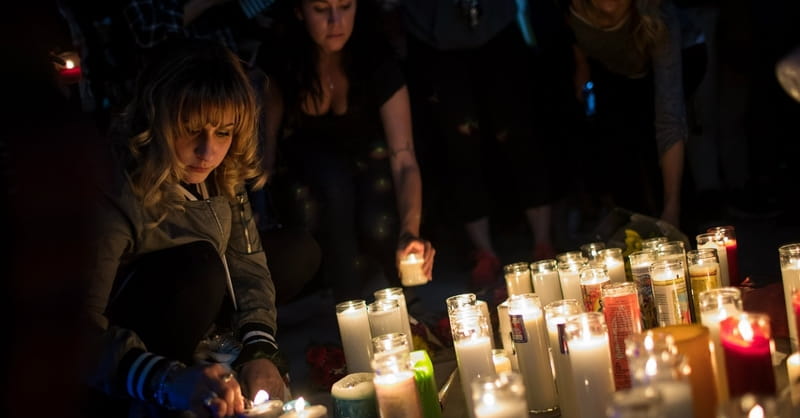 The U.S. and the world are still reeling from the horrific shooting that killed nearly 60 people and wounded over 500 more on Sunday night in Las Vegas.

While we are all still grappling with this senseless act of violence and “pure evil,” as President Trump termed it, there are also stories of courage and heroism emerging that showcase the best aspects of the human spirit.

One story of sacrifice was reported by Twitter user Oliver Darcy. He notes that Krystal Goddard, 35, along with her roommate, Amy McAslin, were attending the Route 91 Harvest festival country music event and were at the Mandalay Bay casino to hear Jason Aldean perform. When the shots began to be fired into the crowd Krystal and Amy took shelter under some tables.

“I just felt that if we stayed there and we held each other,” Krystal recalled. “I genuinely thoguht it was going to [be okay].”

While Krystal held onto Amy, a complete stranger shielded them.

“He told [Amy] that he’d been shot,” says Krystal. “He had expressed to her that he didn’t think he was going to make it.”

Krystal and Amy were in shock from the horror of that night, and they don’t know what happened to the man, but they are fairly sure paramedics took him away on a stretcher. They are also fairly sure he saved their lives.

Many other people also acted selflessly during the shooting. One couple attending the concert fled the scene in their pickup truck, but returned to help transport the wounded to hospitals.

Another story emerged of a husband who gave his life for his wife by shielding her with his body as bullets rained down on the crowd.

Today, over 24 hours after the shooting, hundreds of people were standing in line ready to give blood to help victims.

Writing for the National Review, David French notes, “These kinds of stories should challenge us all. Courage is only theoretical until put to the test, yet it’s remarkable the extent to which tragedy and fear have spawned bravery and selflessness.”

Photo: Mourners light candles during a vigil at the corner of Sahara Avenue and Las Vegas Boulevard for the victims of Sunday night's mass shooting, October 2, 2017 in Las Vegas, Nevada. Late Sunday night, a lone gunman killed more than 50 people and injured more than 500 people after he opened fire on a large crowd at the Route 91 Harvest Festival, a three-day country music festival. The massacre is one of the deadliest mass shooting events in U.S. history.