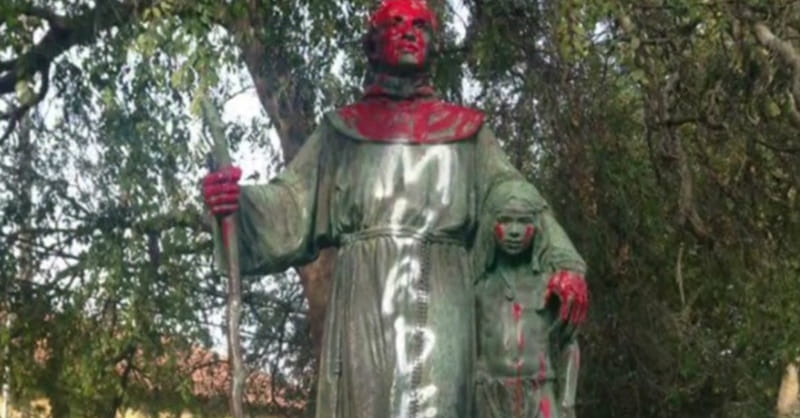 As the battle over Confederate monuments suggest, one person’s saint is another person’s sinner.

And over the weekend that controversy reached beyond the South to California, where a statue of a Catholic saint, Rev. Junipero Serra, was vandalized in Los Angeles.

Images appeared on social media showing the word “murder” smeared in white paint on a statue of the 18th-century Franciscan priest who led the Catholic Church’s missionary efforts among Native Americans on the West Coast.

Traces of red paint and a swastika were also found on the statue, which sits in a park across from Mission San Fernando in the Mission Hills section of Los Angeles.

Serra, who is credited with spreading the Catholic faith across what is now California, was canonized by Pope Francis on his 2015 trip to the U.S.

But critics say the priest was part of an imperial conquest that beat and enslaved Native Americans, raped their women, and destroyed their culture by forcing them to abandon their traditional language, diet, dress and other customs and rites.

“I think the statue should come down from this park, and then put some appreciation to the Native people that live here,” Cristian Ramirez, a local man who came to see the vandalized statue, told CBS Los Angeles. “We don’t want this violent history to be praised in our community.”

Father Serra was born in Spain in 1713. He came to the Americas in 1749, and in 1769 he founded the first of what would become 21 missions along the California coast.

Native Americans brought into the mission to be evangelized were not allowed to leave the grounds. Many labored for no pay. There is evidence of beatings, imprisonment and other abuse at the hands of the missionaries. By the time Serra died in 1784, he is reputed to have confirmed 5,300 people as Catholics, most of them Native Americans.

Serra’s defenders argue that it’s not fair to judge this 18th-century missionary by 21st-century standards. They believe he was a moderating influence on his fellow Spaniards, and frequently pleaded for more merciful treatment for the Native Americans under their control.

Monuments associated with Serra have been vandalized before. Within days of his elevation to sainthood in 2015, the historic mission in Carmel, Calif. was vandalized and gravestones were toppled. Serra’s remains are buried at the Carmel Mission, which was founded in 1770.

Also in 2015, vandals spread red paint on the door of Mission Santa Cruz.

The vandalized Los Angeles statue was restored over the weekend.

Photo: A vandalized statue of Father Junipero Serra in California.