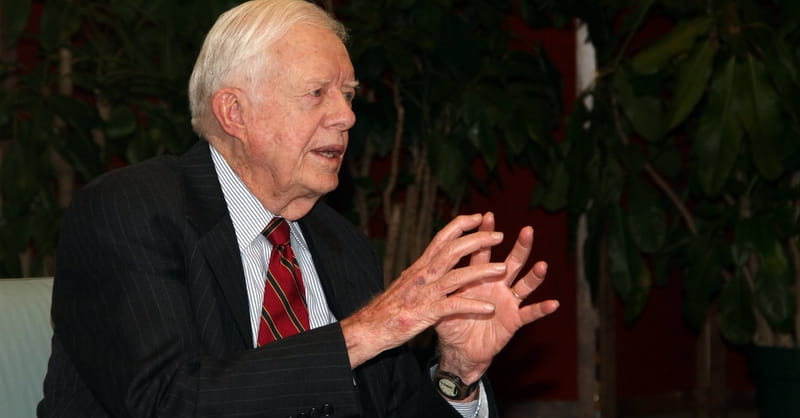 In his 32nd book, titled simply “Faith,” Jimmy Carter looks at how belief in God and others has shaped his 93 years.

“To me, ‘faith’ is not just a noun but also a verb,” the former president writes in his latest — and possibly last — book.

Carter talked about his new book with Religion News Service, and why he is scaling back on teaching his popular Sunday school class in Plains, Ga. The 39th U.S. president also explained why, after some consultation, he decided to speak at Liberty University’s commencement this May.

Of the 32 books you have written, more than half a dozen have focused on faith. Why did you decide to write one with just that word as its title?

And those losses of faith I think precipitated my using, you might say, 93 years of experience and trying to provide the answer of what does faith mean to us and how can we apply our existing faith or potential faith, if we don’t have it yet, into answering these questions that face us in our daily life.

You write, as you enter the last stages of your life, that you still have faith that the world will not self-destruct from nuclear war or environmental degradation. Why do you feel that way, especially with current U.S. tensions over Syria and North Korea?

Well, we’ve had those tensions for a long time and I think they’ve been kind of exacerbated lately by the rhetoric that exists between the United States and other countries, including North Korea and Russia and involving Syria and other places. But this is something that I learned when I was first elected president, before I was sworn in: that I had the ability with 15,000 or more nuclear weapons, along with those owned by the Soviet Union, to wipe out all living creatures on earth.

And so that still is a responsibility or a duty that addresses every president in office.

The next real challenge for us is to learn how to apply, I’d say, Christian and other religious principles in learning how to live with each other in harmony and mutual respect and even some elements of love with those with whom we disagree. And that’s a major challenge that’s very difficult to achieve but I think it’s the most important thing that we face today.

Why did you decide to speak at Liberty University’s upcoming commencement, despite differences you’ve had with its leaders, political or otherwise, and can you give some hint of what you might say there?

I haven’t had any difference of opinion with the current president. I had difficulties sometimes with his father. But I got the invitation, which was something of a surprise to me, and I consulted with my, I say, more moderate Baptist friends. And overwhelmingly they advised me to take a chance as one more step in a longtime effort to provide some element of reconciliation among Christians, and particularly among Baptists, who disagree with each other.

I think we’ve come a long way since I was in office as president, in overcoming that by applying the basic element of Christianity, that is, through the grace of God and our faith in Jesus Christ, we’re the same and there’s no difference between us. And I think we have realized that the overwhelming things that bind us together are much more domineering and dominating in our lives than the differences that exist.

You write that “God is not my personal valet.” What do you mean by that?

(Laughs) When I was younger I used to devote my prayers primarily to things that I wanted God to help me get or to do or to accomplish. As I’ve gotten older and older I realized that my main prayers — I didn’t make this decision in advance — but my main prayers are ones of thanksgiving. And I had this feeling in particular when I thought a couple of years ago that I was going to die in a couple of weeks from cancer. I had cancer in my liver and also four places in my brain. And so I thought my life was about over and I realized at that time that I didn’t have any fear of death. I was just grateful for the wonderful life that I had been granted.

You’ve announced plans to cut back on teaching Sunday school at your Plains, Ga., church, but I believe you still taught three out of the four Sundays in March. Why are you making this decision and is it a hard one for you?

I did. I’ve cut back on my overseas travel already. I’m going on 94 years old and my wife is 90 years old. She’s been quite ill lately. And so we both decided just to cut back on our extracurricular activities. We have a wonderful teacher when I’m not there.

A lot of people in and around Plains, they come to our church; we only have about 30 members. I think we had 350 visitors this past Sunday, by the way, when I taught. But we need to strengthen our own church so that when I’m no longer there, that it will continue to exist. And a lot of local Plains folks don’t like to come to a church where we’re overrun with visitors that don’t have much communication and so forth with each other, fellowship. I’ll be teaching twice in this month. So I’ll continue to teach but I’ll give other teachers and other members of the church a chance to be in the forefront.

The nation just marked the 50th anniversary of the assassination of the Rev. Martin Luther King Jr. Why did you decide to serve as a mediator during a dispute with his children and what difference do you think that made?

I think it all worked out quite well, luckily, not because of what I did but because they were willing to ask me and others to help them. I just met with the three children of Martin Luther King Jr. on a number of occasions over a two-year period and eventually they decided themselves to resolve their differences, which had existed only in court with lawsuits against each other. So they finally have been able to work it out together. I helped a little bit but I was very glad to do it, and got to know them intimately and appreciate once again the great contribution that their father had made.

Your book “Faith” seems to sum up not only your thoughts on faith, but your accomplishments over 93 years. Do you think this is your last book or do you still have more to say and write?

Well, I thought the last book was my last book. I wasn’t intending to write this but my publishers felt, and I didn’t disagree, that the general attitude around the world of disillusionment and a lack of faith in things that never change had become more of a problem.

We do still do that.

For what do you want to be remembered most?

Well, I wouldn’t mind people remembering me as a Habitat Build volunteer. But also I would say in that White House and in The Carter Center we’ve tried to emphasize peace and human rights. And I try to be a champion of peace. I was able, and fortunate enough, to keep my country at peace for four years, which is kind of a rare achievement, and also to be a champion of human rights. So that’s what I’m proud of, among other things. I was blessed with a good wife and a good marriage.

Do you still have faith as you look at these challenging issues that you have faced some of the time at the end of your life?

That’s the main thrust of the book. Despite the challenges that we face, based on my past experience and the past achievements of my country and the world, I still have faith in the ability of human beings to survive and to overcome the transient problems that face us all.