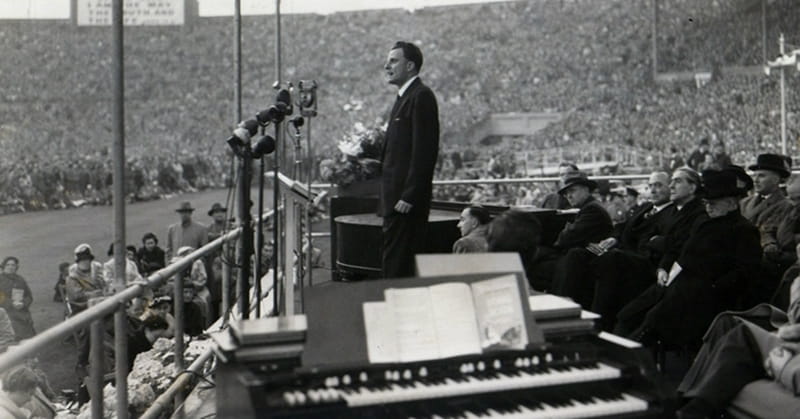 Author William Martin learned with the rest of the world that the subject of his biography, “A Prophet With Honor: The Billy Graham Story,” died on Wednesday (Feb. 21) at age 99.

An updated version of the 1991 book was scheduled to be published on March 6, months ahead of what would have been Graham’s 100th birthday.

Martin, 80, senior fellow for religion at Rice University’s Baker Institute, spoke with Religion News Service on the day Graham died. Martin talked about the evangelist’s legacy, and why there won’t be a next Billy Graham.

Can you tell me how you learned of Billy Graham’s death and what was your first reaction?

I’ve been retained by ABC-TV since, I think, 1998 to be available on this day. I was standing at my counter in my kitchen looking over the newspaper and just about to go exercise and I saw the phone ID that said ABC.

I’ve been thinking about Billy Graham a great deal and, of course, keenly aware that he was 99. It is a significant passing but what is most significant about it is that he had such a remarkable and influential life.

You have written what many people consider the definitive biography, “A Prophet With Honor,” about the man who was known as America’s preacher. How would you sum up his life in just a few sentences?

He achieved a great deal more than most people ever think about achieving in a lifetime.

He was probably the dominant religious leader of the last half of the 20th century. Certainly, no more than one or two popes, perhaps one or two other people, would come close to what he achieved. He was the key leader, the major spokesman of the evangelical movement during the last half of the 20th century, and that movement has become one of the strongest in all of world Christianity and world religion and he played the major role, although not the only important role in that.

You have recently added about 100 pages to your biography on him. What are a couple of new things you reveal about Billy Graham?

It’s mainly a chronicling and talking about the things that happened since 1991. It’s four new chapters. I talk about the transition from Billy Graham to Franklin Graham as head of the Billy Graham Evangelistic Association. And I deal with some of the tensions that were there, and in the last several years Franklin Graham’s becoming more overtly involved with politics and, not that his father was, but that his father counseled against (such involvement) after having been embarrassed pretty significantly by his association with Richard Nixon.

And Billy Graham on several occasions counseled, not just Franklin, but other preachers not to get too involved in politics. Essentially what he said was, “They can use you in ways you don’t know you’re being used.”

Billy Graham had such a lofty ministry — preaching to millions in scores of countries. What are a couple of the simplest things about him that people may not know?

One of the things that to me stood out was his humility. When I had spent a day with him writing on the book many years ago, the man who drove me worked around the house and his wife worked inside the house. He said, “You’ve been visiting with some mighty good folks today. Me and my wife have been working for Mr. and Mrs. Graham now for 15 years and, I’m telling you, they are the same inside the house as they are outside.”

At some point did he prefer baseball and detest going to church?

I’ve heard that. I don’t know that he ever detested going to church. And he liked baseball. You will read things about him that said he was a fine baseball player and aspired to be in the major leagues. But there’s a picture of him, in probably his late teens, where he’s holding a bat and he’s holding it cross-handed. I think that was part of the official early myth. If he’d made it to the majors, we wouldn’t have any Billy Graham.

You have said that no one could really be the next Billy Graham. Are there a few religious figures who come closest?

People rise and diminish. Rick Warren, with “The Purpose Driven Life,” (the second-most-translated book in history, after the Bible) … I think is a very good man but one doesn’t hear about it so much anymore, although he’s still going and still has a significant ministry. And there are evangelists in other countries who are well-known there.

It’s not because there are not people of similar talents, at least comparable talents, comparable abilities, comparable dedication. It’s more that evangelical Christianity has become so large, so diverse and multifaceted that no one person can dominate it, regardless of talent or dedication. It’s just not going to happen. There are too many parts of it to say let’s look to this one person.

Is there any way to know how many people who walked forward at Billy Graham’s crusades to commit to Jesus stuck with that decision?

No. There have been a number of efforts to find that out but they’ve pretty much given up on it. In the United States, revivals did make a difference in churches and a lot of it came to be for the people who were working in the crusades and were gathering together to pray every day or several times a week in groups and calling on people. A lot of people — and this would also include many, many who came forward at the revivals: It wasn’t so much that it was a new experience for them as it was that they were getting plugged back into a higher voltage line. Many churches benefited, I think, from those crusades not because people had learned anything new but because they got just stirred up and said I’m going to do better.

When was the last time you talked to him and what do you recall of that experience?

The last time I talked to him was sometime in the fairly early 2000s.

There was another moment: I’d saved the conversation about the presidents until last because I knew it would be touchy and difficult. And there were people in the organization who thought I shouldn’t have included that material. Of course, there wasn’t any choice about that. So we talked about Nixon particularly and Watergate and how he had been misled. I’d found memos, talking points and other things in Nixon’s archives that he wasn’t aware existed. And what they were saying was “We got to work on Billy Graham and here’s what we need to get him to do and the questions we need to ask.” Essentially, here’s the way we’re using Billy Graham and Charles Colson told me, “Of course, we used him. That’s what we did with people.”

Graham leaned back on the couch with his arms stretched out on each side, and he says, “I couldn’t believe some of those memos that you showed me until I saw them.” He said, “I knew what I’d said to the president and I knew what he’d said to me. But when I read all those memos that had been circulating in the background, I felt like a sheep led to the slaughter.” I think what I had presented him with had pained him deeply and instead of denying it and saying it’s fake news, he was absorbing the force of it.

Is there something else that people should know now that he is no longer with us?

I’ve said before that Billy Graham is not an office in the Christian church like bishop or pope. He doesn’t have to be replaced and, for the reason that I said, no one person can dominate it.

But he would be very happy and was very happy to say at these great conferences where there were tens of thousands or many thousands of itinerant evangelists from 185 different countries overall. He said, “You are my successors.” And they would call themselves even “little Billy Grahams” going out and preaching the gospel of Jesus Christ in ways that his organization had taught them.

I think he will be remembered as a person of integrity and, to quote Scripture, “a workman who needeth not to be ashamed.”

Photo: Billy Graham speaks during the closing meeting of the Greater London Crusade at Wembley Stadium on May 22, 1954.