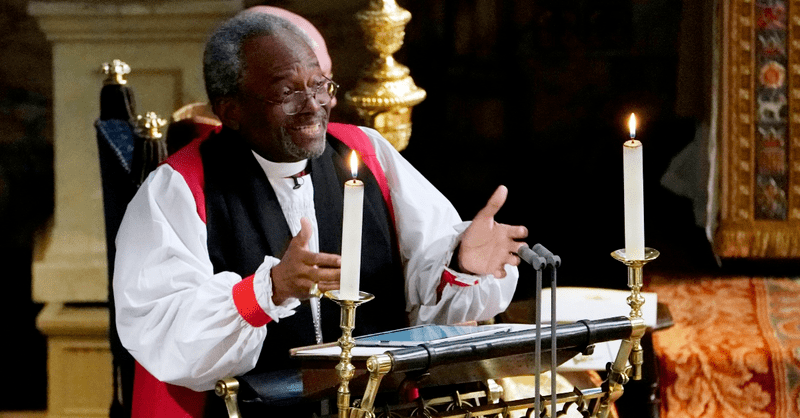 It’s not the romantic words Prince Harry whispered to his bride as she joined him at the altar.

Days after the royal wedding, it’s the address by the Most Rev. Michael Curry, presiding bishop of the Episcopal Church, people still are talking about.

It was a sermon that quoted from American civil rights icon Martin Luther King Jr. and French philosopher and Jesuit priest Pierre Teilhard de Chardin, that referenced “slaves in America’s antebellum South” and the theology in the African-American spiritual “There Is a Balm in Gilead.” It proclaimed the “power of love” and challenged its hearers to “think and imagine a world where love is the way.”

It was a sermon that a reporter for Britain’s Sky News referred to as “unconventional” in an interview afterward with Curry and Archbishop of Canterbury Justin Welby of the Church of England. (Welby responded, “There is nothing conventional about Christianity.”)

It was a sermon that stirred even the famously skeptical Brits, half of whom claim to have no religion, according to the Government’s British Attitudes Survey. Former Labour leader Ed Miliband tweeted that Curry “almost made me a believer.” British Airways pilot Dave Wallsworth tweeted: “I’m not a religious person, but Bishop Michael Curry was superb.” In a headline, The Daily Telegraph deemed it “The sermon that stole the show.”

But for many Episcopalians, that message of love wasn’t so different from the messages preached in their pulpits every Sunday. It was “pure Michael,” according to Indianapolis Bishop Jennifer Baskerville-Burrows, who has known Curry for more than 20 years.

“We have our 10 minutes of fame here,” said the Rev. Jeffrey Lee, bishop of Chicago. “The truth is, what Bishop Curry said is essentially the message you can hear in Episcopal churches all over the place.”

Curry was born in Chicago and raised in Buffalo, N.Y. He began his ministry in Winston-Salem, N.C., and was elected presiding bishop of the Episcopal Church in 2015.

In his address, Curry pulled from a number of sources, including the reading from the biblical book of Song of Solomon that Prince Harry and Markle, now the duke and duchess of Sussex, chose for the service. But the bishop said in his Sky News interview that his inspiration “really was, to be honest, the good news of Jesus Christ and the good news not only that we are loved, but that this love isn’t simply a sentimental thing, it’s a way of life, and it’s a way of life that actually makes a difference in people’s lives and in the life of the world.”

As presiding bishop, Curry has been an international figure for some time, said Baskerville-Burrows. She doesn’t see the headlines, the impression by Kenan Thompson over the weekend on “Saturday Night Live” or “a few thousand more Twitter followers” changing him. Instead, she said, “I think what it does more is it changes the church and what people expect or know about the Episcopal Church.”

To wit, the group she runs with has been talking about the address. And, she said, next time somebody asks her about the Episcopal Church, she’ll have a video to send them. She’s excited that conversation is happening both inside and outside the church.

The Rev. Marcus Halley, rector at St. Paul’s Church on Lake of the Isles in Minneapolis, said that “13-minute trip through African-American history” gives credence and credibility when black voices often are not taken seriously in the white church. For example, he pointed to critiques of Curry’s address as “Christianity light” or a bingo card of phrases Curry often uses in his message that went viral online as efforts to dismiss his message. A spokesperson for the Episcopal Diocese of Fort Worth said the intent of the bingo game was to encourage viewers to pay attention to Curry’s message.

He also said he thinks Curry’s address will be numbered among history’s great sermons “because of who he is, what he said, where he said it and how he said it.”

“To hear that this black American preacher going over to England, which until recently sort of sat as the apex of European colonialism in the world — to hear him walking through the hallowed halls of Britain and name and give voice to enslaved Africans whose voices have never traveled that far was absolutely amazing and something I will remember,” Halley said.

Photo: The Most Rev Bishop Michael Curry, primate of the Episcopal Church, gives an address during the wedding of Prince Harry and Meghan Markle in St George's Chapel at Windsor Castle on May 19, 2018 in Windsor, England.