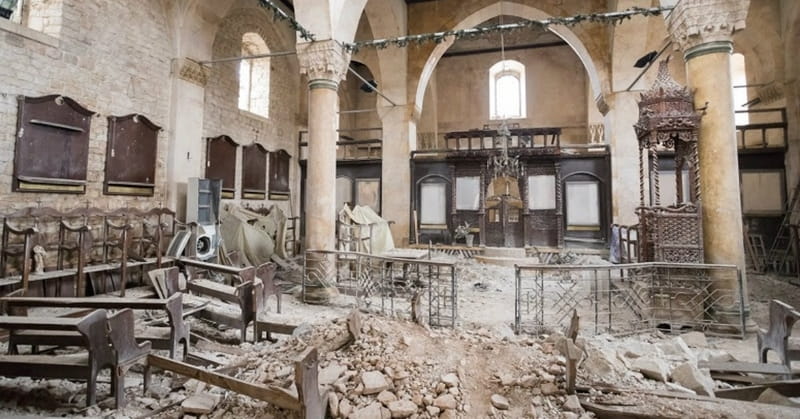 Two thousand years of Christianity in Syria could be wiped out by the very forces Western governments are supporting, an Anglican vicar has claimed.

Rev. Andrew Ashdown, who has made ten trips to Syria since 2014 and is studying for a PhD in relations between Christians and Muslims there, also accused Western nations and Western church leaders of “neglecting” Syrian Christians.

Rev. Ashdown travelled to Syria in April with a group that included Anglican Canon Giles Fraser, Baroness Cox, Bishop Michael Langrish and Dr. Erica Hunter, an expert on Middle Eastern Christianity from London University’s School of Oriental and African Studies (SOAS). The group was criticised for not cancelling the visit, which took place hours after British, French and American pilots carried out an airstrike on alleged chemical weapons facilities run by the regime of President Bashar al-Assad. The airstrike, near Homs, was ordered in response to a suspected chemical weapons attack and was backed by EU foreign ministers.

The speakers challenged the stance of Western governments that have wanted Assad to step down as a pre-condition to peace talks, and are backing Sunni rebel groups believed to be moderate and pro-democracy. However their stance against Assad, who is backed by Russia, has softened as the war has dragged on. A spokesperson from the UK Foreign Office told World Watch Monitor on 8 June that the UK is committed to using diplomatic means to “achieve a political settlement that … provides stability for all Syrians and the wider region”, adding: “There needs to be a transition to a new, inclusive, non-sectarian government that can protect the rights of all Syrians and unite the country.”

Although Assad’s record on human rights has been widely criticised, he is seen as a defender of the country’s non-Sunni minorities, including the various Christian communities, who were believed to make up ten per cent of Syria’s population before the start of the civil war.

However speakers took issue with binary portrayals of the war as pro-democracy Islamists versus pro-Assad minorities, noting that some Sunnis remained committed to their Christian neighbours, while Christians are not unanimous in their support for Assad.

Rev. Ashdown cited examples of Muslims defending Christians and showed the audience a slide of him with a group of fighters from Hezbollah, the Lebanese Shia group backed by Iran, who had protected a monastery while it was near the frontline with IS. He said they told him: “We will give our lives to protect the Christians in Syria, because without the Christians in this land, Syria will not be Syria.”

“Many Muslims are appalled by what is done in the name of Islam by extremist groups,” he continued. “Our support for the militant extremists has contributed to the length of violence and the extent of the conflict.”

He showed a slide of a fifth-century church from the town of Maaloula, which had been a seat of Christian learning before the war. He said the church was “smashed and desecrated by the rebels that our government supports”. Although the church has been restored, he said its ancient icons have been stolen. Rev. Ashdown later clarified to World Watch Monitor that residents told him the attackers operated together and included the Free Syrian Army, which has received backing from the US, the Al Farouq Brigades, Jabhat al-Nusra, Jaish al-Islam, Ahrar al-Sham, Jabhat Islamiyya, Jathat Tahreer al-Qalamoun, and Ahfad al-Rasoul.

Rev. Ashdown described the rebel forces who have held parts of Damascus, including the suburb of Eastern Ghouta, as “extremist militant fighters” who were being supported by the West, and said there had been shelling on both sides. “The Christian quarter has been a particular target, with churches and schools regularly being targeted, and shelling often being timed when schools were coming out and the streets were at their busiest,” he said, adding that 11,000 civilians have been killed in central Damascus since the start of the war, and that 2,500 of them were children.

Baroness Cox said Syrian support for Assad had increased in the face of religious extremism but summed up the dilemma of Syrians who do not side with the Islamists. She quoted a woman in an internally displaced people (IDP) camp in Latakia who had fled Islamist terrorists. The woman told her that her husband and 25-year-old son were captured and killed as they tried to flee, adding: “We die from shellings on both sides, but on one side we die from shellings, and on the other we die from shellings and beheadings, and we don’t want the beheadings.”

Dr. Nazir-Ali said he deplored “all” the violence – whether committed by Assad or the groups trying to overthrow him. He called for a transitional administration to arrange for elections under international supervision. He warned that a violent overthrow of the regime by Islamist forces could be disastrous for minorities such as Christians, as occurred in parts of Iraq overrun by Shia and Sunni militias. “The vast majority of Syrians do not want an Islamist regime. A Salafi state … would put an end to Syria’s rich tapestry, which would be as great a tragedy as has happened to its neighbour, Iraq,” he warned.

Religious-freedom charities Open Doors International and Middle East Concern are campaigning for Christians in Iraq and Syria to be guaranteed equal citizenship, dignified living conditions and a prominent role in reconciling and rebuilding society.

The post ‘Christianity in Syria is under threat from forces the West is supporting’ appeared first on World Watch Monitor.

Photo: A badly damaged Greek Orthodox church in the old quarter of Aleppo