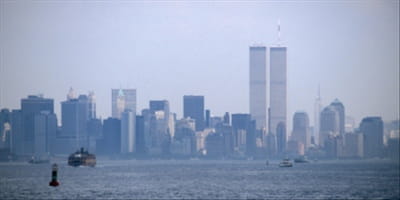 “We have some planes.”

Millions of Americans were on their way to work, and in New York City it was the first day of school and a primary election day. In Florida, President George W. Bush had donned shorts and an old T-shirt and headed out for an early-morning jog on a golf course before speaking at a nearby elementary school. Vice President Dick Cheney was at work in his West Wing office.

But at 8:24 a.m. the clement day ended when a then-inscrutable message from the cockpit of American Airlines Flight 11 reached air traffic controllers: "We have some planes. Just stay quiet and you will be OK." If only it were a straightforward hijacking. Instead, it was the 21st-century equivalent of a shot heard round the world.

By 8 a.m., the 9/11 Commission would later conclude, the 19 hijackers boarding four airliners "had defeated all the security layers that America's civil aviation security system then had in place." They turned four transcontinental flights laden with jet fuel into guided missiles that killed 2,977. Among them were civilians from 38 states, the District of Columbia, and over 70 countries. The dead also included 343 firefighters, 60 police officers, and 55 U.S. military personnel.

A new revolution, marked by the jihadists' fantasy of striking a death blow at an imagined Western tyranny, was underway. American Airlines Flight 11 from Boston to Los Angeles carried lead hijacker Mohamed Atta, a 33-year-old Egyptian, along with four others (two were brothers). Atta flew the Boeing 767 into the North Tower of the World Trade Center. United Flight 175 from Boston to Los Angeles had Marwan al-Shehhi as the hijacker-pilot plus four others. Born in the United Arab Emirates, he flew Flight 175, also a 767, into the complex's South Tower. Taking over American Flight 77 from Dulles to Los Angeles was Saudi hijacker-pilot Hani Hanjour and four others, circling the Boeing 757 back east to crash into the Pentagon.

Aboard United Flight 93 from Newark to Los Angeles, hijacker-pilot Ziad Jarrah from Lebanon was also one of the lead planners of the attacks. Working with three hijackers and against a passenger uprising, he crashed the Boeing 757 into a field in Shanksville, Pa. Investigators would later conclude he was headed for the U.S. Capitol.

For every villain that Tuesday, there would be many more heroes. Aboard American Flight 11, attendant Amy Sweeney, 34, having agreed to take an extra shift that morning for an attendant who was sick, would calmly relay to ground control that the airliner had been hijacked, that one passenger and two flight attendants had been stabbed, and the plane had turned south — where it crashed into the upper floors of the 110-story North Tower at 8:46 a.m.

Six minutes later Lee Hanson in Connecticut received a phone call from his son Peter, a passenger aboard United Flight 175: "I think they've taken over the cockpit — an attendant has been stabbed —  ... the plane is making strange moves." At 9:03 United 175 struck the South Tower, one minute after New York Port Authority began broadcasting "an orderly evacuation" of the 10,000 to 14,000 people believed to be in the buildings.

Passengers aboard American Flight 77 would likewise warn loved ones of the flight's hijacking shortly before it crashed into the Pentagon. Retired Master Sgt. Max Beilke, drafted in the Korean War and the last U.S. combat soldier to depart Vietnam in 1973, died as Section E of the Pentagon collapsed.

By the time hijackers took over United Flight 93, the state of emergency was widely known. Vice President Dick Cheney had retreated to a secure bunker beneath the White House, and both it and the U.S. Capitol were evacuated. The FAA had ordered a full ground stop of all flights over or bound for the United States — nearly 5,000. The president, on board Air Force One, would fly to a series of Air Force bases and keep to the skies, away from the capital and a feared wider attack, perhaps nuclear.

Air National Guard fighter jets had scrambled over Manhattan. Passengers on Flight 93, aware of other hijackings, repeatedly stormed the cockpit, and Todd Beamer's "Let's roll" cry, captured via an airline phone call, became a slogan and solace in days to come, as the Wheaton College alumnus and others ultimately forced hijackers to crash the plane into countryside in Pennsylvania, 125 miles — and less than 20 minutes' flight time — from Washington.

Tragedy unreeled in New York as an international prayer breakfast to mark the opening of the UN General Assembly session was ending. Yale professor of theology Miroslav Volf spoke on reconciliation and the role of religion in conflict. He recited "Death Fugue," a poem by Holocaust era poet Paul Celan: "We shovel a grave in the air. There you won't lie all too cramped" — unaware of the deaths happening in the air only blocks south. As he concluded, officers ordered the UN evacuated.

In the towers, evacuees began discarding their shoes as they reached the 60th floor, holding hands and descending steadily, fog so thick they could not see beyond a few inches. "There was jet fuel, but we thought it was water," said survivor Florence Jones.

Bruno Dellinger, who worked on the 47th floor of the North Tower, headed down an overheated stairwell. He discovered "regular people, like me, and people from upper floors who were badly burned — no skin, no hair, just burned — they were coming down, walking or carried down helped by people." He met firefighters and security personnel: "In some of those eyes you could see that they knew something, it was dangerous, they knew something ... and while there was no panic whatsoever in the stairwell, those people were concentrated, focused on doing their job ... and while I was walking down they were going up to their death, and I was walking down to live."

On the street, sickening thuds could be heard in the plaza as, according to one bystander, "people were so frightened they jumped out of buildings and exploded on impact."

By 10 a.m. the South Tower collapsed suddenly and by 10:30 the North Tower followed — a seismic event equal to a 2.3-magnitude earthquake.

In addition to the 3,000 dead in New York, Washington, and Shanksville were 3,000 children under the age of 18 who lost a parent. Their average age was 9. Dozens more were born after 9/11 to grieving widows—including one who went into labor during her husband's memorial service.

Almost exactly 12 hours after the first plane struck, President Bush addressed the nation: "America and our friends and allies join with all those who want peace and security in the world, and we stand together to win the war against terrorism."

Few if any could fathom what the words would mean: a decade of wars on two soils, countless controversial arrests of suspected terrorists, a Wall Street downturn, government reorganization with a new emphasis on homeland security, and changes to national defense so broad they would affect even what size shampoo bottle a passenger could carry onto a plane. But as President Bush declared, "Freedom and fear, justice and cruelty, have always been at war, and we know that God is not neutral between them."

After the 9/11 broadcast, Bush returned to a bunker beneath the White House grounds, where his most senior national security advisers gathered as it neared midnight to chart a response to the deadliest attack on the U.S. homeland in American history.