Why Won’t Mike Pence Eat Alone with a Woman Who is Not His Wife? 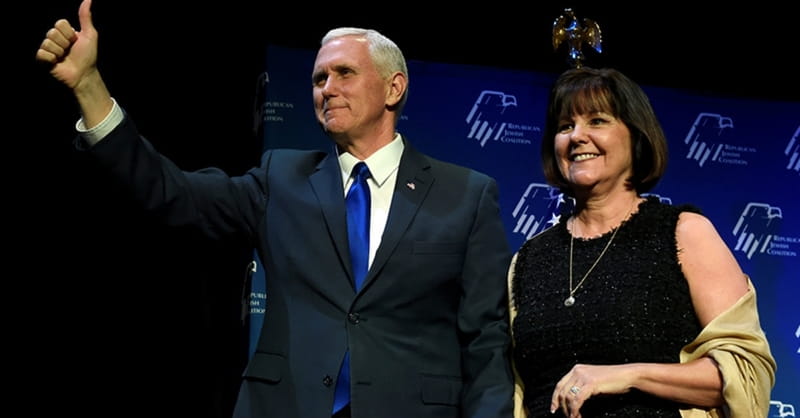 Why Won’t Mike Pence Eat Alone with a Woman Who is Not His Wife?

A recent Washington Post profile of Karen Pence mentioned that her husband, Vice President Mike Pence, never eats alone with another woman or goes without her to events where alcohol is being served.

But the Indiana Republican’s practice is not unusual in many conservative Christian circles. As Emma Green pointed out in The Atlantic, it likely stems from something called “the Billy Graham Rule,” named for the 98-year-old international evangelist. Nor is it that much different in intention from the practices of conservative Jews and Muslims. Let us ’Splain. . .

What is the Billy Graham Rule?

Justin Taylor traces the historical roots of the Billy Graham Rule for The Gospel Coalition, a evangelical blog. The Billy Graham Rule, he writes, was the result of an informal 1948 gathering between Billy Graham and three of his closest male friends and associates in a motel in Modesto, Calif.

Graham and his friends were all young, married men who spent a lot of time on the road, holding religious revivals in different towns several times a week. Graham, then a 29-year-old at the threshold of his remarkable career, asked his friends to list the problems faced by budding ministries like his.

The second item on the list — after money — was “sexual immorality.” “We all knew of evangelists who had fallen into immorality while separated from their families by travel,” Graham wrote in his biography, “Just As I Am.” ” … From that day on, I did not travel, meet or eat alone with a woman other than my wife.”

He even found a New Testament verse to support his decision: “Flee the evil desires of youth and pursue righteousness, faith, love and peace, along with those who call on the Lord out of a pure heart.” — 2 Timothy 2:22

How unusual is it that Mike Pence follows the Graham Rule?

Hard to say. It is certainly not unknown among his fellow evangelical Christians — Christian chatrooms are full of personal experiences of life with — and without — the rule. And members of other faiths have rules that guide their relations to other women. Some Orthodox Jewish men won’t be alone in a closed room with a woman who is not their wife. Recently some ultra-Orthodox Jews have refused to sit next to women on airplanes. And some conservative Muslims will not shake hands with women or be alone with women outside their family circles.

Some find Pence’s behavior misogynistic. Clara Jeffery of Mother Jones tweeted, “If Pence won’t eat dinner alone with any woman but his wife, that means he won’t hire women in key spots.”

1/ If Pence won't eat dinner alone with any woman but his wife, that means he won't hire women in key spots.

Others find the behavior patriarchal — a suggestion that women can’t be without a chaperone or that it is women who are responsible when men stray. They point out Jesus didn’t adhere to the rule; he met alone with the woman at the well, the adulterous woman and Mary Magdalene.

“What the Billy Graham rule does is reduce women to sexual temptations, objects, things to be avoided, ” Laura Turner, a Christian writer, said on Twitter. “It is dehumanizing, anti-gospel."

Jesus warns against this - if your right hand causes you to stumble, cut it off. Problem is, sin is never in the hand. It's in the heart.

Others see hypocrisy. “So the GOP is up in arms over Sharia law, yet Mike Pence won’t have a business meal with a woman that’s not his wife,” tweeted Philip Sherburne, an editor at Pitchfork. “Sure, that checks out.”

So the GOP is up in arms over Sharia law, yet Mike Pence won't have a business meal with a woman that's not his wife. Sure, that checks out.

Along the same lines, some were incredulous that Pence won’t eat with a woman other than his wife but would campaign for, and defend, a man who admitted to grabbing women by their private parts.

Still others see the logic of the rule. Look at the trouble Bill Clinton, a Baptist, might have avoided had he adhered to the Graham Rule. And the list of Christian pastors floored by “sexual immorality” is a long one — Tullian Tchividjian, David Loveless and Sam Hinn are just three of the most recent. (Not-so-fun fact: Tchividjian is Billy Graham’s grandson.)

Writing at The Federalist, Mollie Hemingway, a Christian, said Mike Pence “sounds like he’s a smart man who understands that infidelity is something that threatens every marriage and must be guarded against.”

Photo: Vice President Mike Pence, left, and his wife, Karen Pence, acknowledge the audience before he speaks at the Republican Jewish Coalition's annual meeting in Las Vegas on Feb. 24, 2017.