The Pope and the President: What to Look For in the Obama-Francis Summit 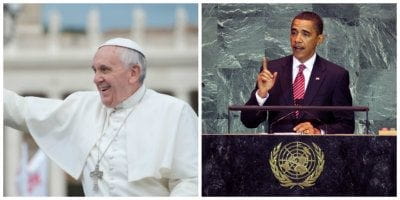 The Pope and the President: What to Look For in the Obama-Francis Summit

The news that President Obama will meet with Pope Francis on March 27 brightened a snowy Tuesday morning for Catholics who see a broad overlap between the president’s agenda and the pontiff’s repeated denunciations of income inequality and “trickle down” economics, and his support for the poor and migrants.

Other Catholics, especially conservatives already unsettled by Francis’ new approach, hoped that the pope would use the encounter at the Vatican to wag a finger at Obama over the president’s support for abortion rights and gay marriage.

So what will the two leaders talk about? What issues will they avoid? With Francis, anything is possible, but here are some initial ideas on how the summit could play out:

Poverty and the wealth gap

Roman Catholics call it social justice. American politicians call it a campaign slogan. Whichever tagline you prefer, poverty has become a favorite new buzzword inside the Beltway, in part thanks to Francis’ popularity and his repeated desire to have “a poor church for the poor.”

Expect Obama to highlight his common ground with Francis in this area. He’s already done that twice: telling an interviewer in October that he was “hugely impressed” with the pope’s “incredible empathy to the least of these,” and quoting Francis last month in a speech on income inequality. In announcing the visit, White House press secretary Jay Carney said Obama “looks forward to discussing with Pope Francis their shared commitment to fighting poverty and growing inequality.”

A truce in the culture war?

Pope Francis will certainly bring up the church’s opposition to abortion, a distinct contrast with Obama’s strong support for abortion rights. And the pope will likely mention the U.S. bishops’ long-running fight with the administration over the contraception insurance mandate.

Yet social conservatives are always hoping for a tongue-lashing, and popes always disappoint them by not taking presidents to the Vatican woodshed. When U.S. Secretary of State John Kerry met his Vatican counterpart, Cardinal-designate Pietro Parolin, earlier this month, Parolin touched on the birth control issue but did not make it a focus of the 90-minute discussions, which were praised by the Vatican as “positive” and “constructive.”

Whatever Francis says to the president, some already suspect that Obama will find a way to spin the talks away from abortion. As blogger Rocco Palmo tweeted when news of the meeting broke just ahead of the anniversary of the Roe v. Wade decision legalizing abortion: “Rather curious that White House announces Francis-Obama meeting hours before March for Life events begin, no?”

Obama is a Protestant who has often cited the late Chicago Cardinal Joseph Bernardin as an inspiration — a “common ground” model for an engaged and active community-based life that forges alliances where possible and uses dialogue to deal with the tensions of contrasting views.

Francis seems to take that approach as well, and he also appears to echo Bernardin’s “consistent ethic of life” ideas, which see issues such as abortion and euthanasia not as stand-alone markers of Catholic identity but as integral parts of the church’s wider, womb-to-tomb approach to life that encompasses the poor and immigrants.

A good example of Francis’ “global” view was his speech this month to diplomats accredited to the Holy See. The pontiff cited a host of urgent issues, including  immigration, the environment, poverty and hunger. Francis mentioned abortion (though not gay marriage), but he did so in the context of many other topics.

Peace in the Middle East

Kerry’s talks with Parolin this month focused on peace in the Middle East, and Francis is also likely to spend a lot of time with the president discussing ways to halt the brutal civil war in Syria. Francis has made that a priority, and he will be meeting with Obama two months before Francis makes his own pilgrimage to the Holy Land.

The Vatican and Washington were at odds a year ago when Obama was threatening a military strike against the Syrian regime and Francis rallied international protests against armed intervention. The military threats — or the papal prayer vigil — led Damascus to agree to give up its chemical arms, and now the pontiff and the president are on the same page in pushing for a peace settlement.

An invitation — and an RSVP?

Obama is sure to issue an invitation to Francis to visit the U.S., and specifically the White House. While Francis has been less inclined to be a globe-trotter in the mold of his predecessor, John Paul II (or even Benedict XVI), there’s a good chance Francis could visit the U.S. for the September 2015 World Meeting of Families in Philadelphia.

Before he resigned last year, Benedict said he would like to come for that event, and Francis could certainly work in a visit to the nation’s capital nearby and maybe to New York; Cardinal Timothy Dolan and the city’s new mayor, Bill de Blasio, are already lobbying for a Big Apple papal visit.

One topic the two men surely won’t discuss will be the State Department’s decision to move the U.S. Embassy to the Holy See to new quarters inside the compound of the American Embassy to Italy.

News of the move late last year infuriated a number of Republicans, but the move was made for security reasons, and it actually upgraded the quality of the Vatican embassy while saving $1.4 million annually and putting the ambassador’s office a bit closer to the Vatican. Given Francis’ disregard for protocol, and his focus on spending money on the poor instead of on pomp, Obama could pledge to give the savings to charity and he’d have an instant fan.

The pontiff could even give the president some political advice. “I would have made a good pope,” Richard Nixon is rumored to have mused. The tale is probably apocryphal, but it underscores how much presidents can get bogged down by the kinds of checks and balances pontiffs don’t have to face.

Yet as Obama confronts Republican resistance on Capitol Hill, Francis is also facing strong headwinds from church conservatives and from the infamously sclerotic papal bureaucracy, the Roman Curia. He’s had to use the power of his message — and his considerable popularity — as much as his authority to try to turn around the Vatican. “Obama would be wise to talk politics with Francis,” Notre Dame’s Candida Moss wrote in Politico. “He might be able to pick up a few pointers.”