Sexy Swingers Club or ‘Church': Who Gets to Decide? 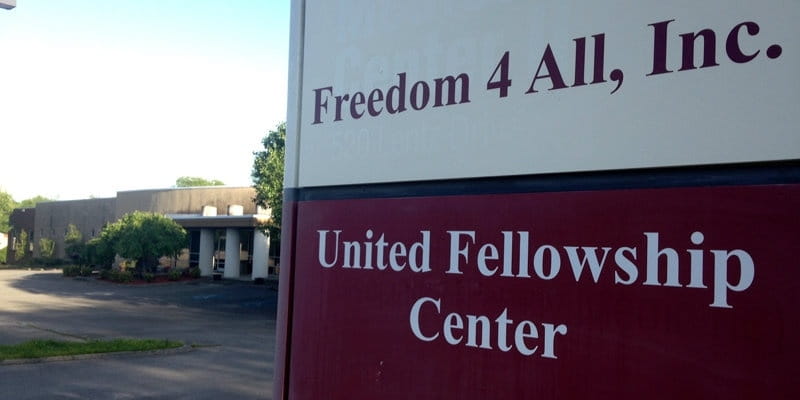 Sexy Swingers Club or ‘Church': Who Gets to Decide?

Goodpasture Christian School sits on a sprawling, bucolic campus seven miles north of downtown Nashville, where 900 students ready themselves for adult lives of college, career and loving the Lord.

Right next door sits the United Fellowship Center, a planned church where adults will ready themselves to have sex with each other after enjoying a little BYOB togetherness.

It’s the newest incarnation of The Social Club, a whispered-about swingers club in downtown Nashville that left for the suburbs when a building boom took its parking lot. The community went bonkers after zoning hearings revealed the club’s plans to relocate in a former medical office building in Madison — adjacent to Goodpasture and within a mile of an Assemblies of God megachurch.

After months of debate, an emergency city zoning amendment and a state law designed to stop the relocation, the club’s attorney made an announcement: The Social Club would open in its new location as a church.

Protection via the First Amendment effectively silenced zoning complaints — for now. But it sparked conversations about what it means for a secular organization suddenly to label itself a church, and religious scholars seem no more ready to plunge into that debate than American courts have proved to be.

“When I see this case, I do roll my eyes, but I also know Protestant Christians in America don’t own ‘church,'” said Kutter Callaway, assistant professor of theology and culture at Fuller Theological Seminary in Pasadena, Calif.

“What is a church, what’s the point of it, and why have we as a society said religious groups are exempt from things other groups aren’t? Those are really core questions. We don’t get to them, because we founder upon the rocks of politics and legalese.”

The church’s attorney, Larry Roberts, makes clear that United Fellowship won’t seek nonprofit status — removing its exposure to a 14-point list that the Internal Revenue Service uses to determine whether an enterprise is religious. Members will pay about $150 a year to belong, plus a per-visit fee, he said.

When The Social Club first announced its plan to move to Madison, remodeling plans for the new space submitted to Metro Nashville’s zoning department labeled two rooms as dungeons. Now, as United Fellowship, those same rooms are labeled “choir” and “handbells.”

Roberts said members can bring their own alcohol, and if they show up and want to have sex, they’ll have to take it off campus. United Fellowship Center doesn’t align itself with any world religion, and its belief system is brief: “Do not steal, do not lie, do not cheat, do not take the life of another, do not commit adultery — without the knowledge and consent of your spouse,” Roberts said.

The debate gives churches the opportunity for some introspection, said Craig Detweiler, a communication professor at Churches of Christ-affiliated Pepperdine University. For example, he asks, when buildings house coffee shops, bookstores or gyms, are those part of the church — or are they not another form of social club?

“The swingers club may be gathering to worship the body,” Detweiler said. “But what does it mean to be the Body of Christ? Maybe we need to redefine why we gather. … Perhaps this is a post-Christendom moment that we’re in.”

After all, he noted, the Apostle Paul advised the Corinthians on how their church should stand out from temples where patrons had sex with prostitutes to get closer to God.

Transcendent thinking about religion aside, Goodpasture president Ricky Perry has a ground-level zoning war to fight. He said the biggest problem with United Fellowship is his students’ curiosity. Google searches of “United Fellowship Center” — which is on a sign that’s visible from the school’s side entrance — lead to articles about the swingers club.

Perry said he initially received the news of the “church” with hope that the club’s owners had seen the errors of their ways. Now that seems unlikely.

“For (Roberts) to play the we’re-going-to-be-a-church card — I don’t think the club realized that once he played that card, that can begin a lengthy legal process that could employ him for a long period of time. What is a church? It’s nebulous in our society,” Perry said.

“Our school will exhaust every resource to stop this project.”

According to Metro Nashville Zoning Administrator Bill Herbert, United Fellowship has a  permit for remodeling. There will be electrical, plumbing and building inspections to pass, then a request for an occupancy and use letter from the city government. If everything complies with code, Herbert said, he has to grant it.

Then anyone is free to complain if United Fellowship isn’t operating in accordance with its approved use. If that’s the case, the city would seek to enforce its codes through the courts.

“It is difficult. What is a church and what is not a church, and where do we draw the line between the two? I don’t have a clear answer for that at this point,” Herbert said.

“Right now, my obligation is to take them at their word.”

There’s a long list of precedents that courts can consider on whether religious beliefs are sincere, said Mark Goldfeder, director of the Law and Religion Student Program at Emory University. The most recent is last year’s Burwell v. Hobby Lobby, where Supreme Court Justice Samuel Alito wrote for the majority about the case’s lack of pretextual religious beliefs — insincere claims of religious motives purely for financial gain.

In the Hobby Lobby case, the court found that the owners’ objection to providing insurance coverage for certain types of birth control was based on long-held religious beliefs, not a desire to save money. Both Goldfeder and Alito also cited Witmer v. United States, a 1955 military draft case in which the plaintiff suddenly lay hold to strong belief as a Jehovah’s Witness in order to avoid service. He lost.

In 1968, in United States v. Kuch, a defendant indicted on charges of selling LSD offered the defense that her membership in the Neo-American Church required her to take psychedelic drugs. The court refused to dismiss the case against Judith Kuch under the finding that defendants can’t use religion as a shield for antisocial behavior.

All the courts would have to do in the swingers club case is look at the events leading up to the announcement that it was a church, said Kathleen Flake, a University of Virginia religious studies professor who specializes in First Amendment issues. “The court is not barred from using common sense,” she said.

Courts will look at United Fellowship’s leadership structure and whether those leaders have religious training, as well as their belief system and whether it deals with the transcendental rather than the material. As for whether a sexual enterprise can or should apply the label of church, Flake said, offense doesn’t equal harm.

“Most people are offended by someone else’s religious beliefs,” she said.

The 50 members of New Jerusalem Baptist Church, located on the other side of United Fellowship from the school, tried to buy the building at 520 Lentz Drive before the swingers club swooped in and got it at a bargain, said Pastor Harry Flemmings.

His congregants have been less vocal than the school or the nearby megachurch, but they’re no less aggrieved. Flemmings, a former police officer, said he’s known of club founder George “Al” Woods for decades through Woods’ nightclub and other business ownership.

“In the Bible Belt, we’re not equipped to deal with something like this. It’s very painful, very hurtful, and we’re praying about it.”

Photo: United Fellowship Center in suburban Madison, Tenn., is a planned “church” that will house what used to be called The Social Club, a whispered-about swingers club.