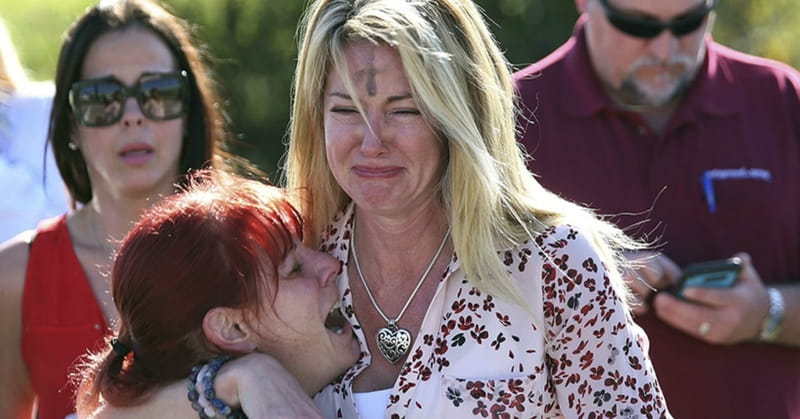 That message came Wednesday (Feb. 14) not from a religious leader, but from CNN counterterrorism analyst Phil Mudd as he broke down while discussing the school shooting that had happened earlier in the day.

In all, 17 people were killed in the shooting at Marjory Stoneman Douglas High School in Parkland, Fla., making it one of the deadliest school shootings in modern American history.

The shooting came on Ash Wednesday, when Catholic and many Protestant Christians remember their mortality as they begin the penitential season of Lent. It also happened to be Valentine’s Day, when many Americans plan to celebrate their loved ones, not lose them.

Details still are emerging, and authorities have not commented on a motive. The 19-year-old suspected gunman reportedly had been expelled from the school. The leader of a white supremacist group also has claimed the suspect was a member and had participated in paramilitary drills, though local police say they have not yet found a connection between the suspect and the group.

And many religious leaders are still searching for words in the aftermath of the tragedy; most called for prayer, while some begged for that prayer to be accompanied by action.

Here is a sampling of their reactions, some of which have been edited for length:

“It is horrifying to once again be grieving another school shooting with multiple lives lost, this time at a high school in Parkland, Florida, my own home state. As a mother and a grandmother, I grieve for the victims who have had their lives and futures stolen from them, and for the families who are left to cope with the aftermath of this terrible tragedy. We pray that God would be close to the brokenhearted, as He promises us in scripture He will be, and that the community of Parkland will be comforted in their time of need.”

God, please hold with your love and strength the familes who grieve tonight.

“No other country in the world tolerates this level of deadly slaughter. Sandy Hook. Orlando. Las Vegas. Sutherland Springs. The many other attacks that have left families forever shattered by loss. And now Parkland. Until our elected officials stop issuing empty calls for thoughts and prayers and start protecting all Americans, we are left to wonder which community will be the next one added to this dreadful list.”

Another shooting.
Another act of violence.
Another political decision that abuses the oppressed.
I find myself reading and praying this prayer over and over again.
And I wrote it last June.https://t.co/5hrrjnXAOQ@Sojourners @SojoPeace #GunReformNow #Florida

“Psalm 145:18 says, ‘The LORD is near to all who call on him, to all who call on him in truth.’ This is a moment when every American who professes to believe in God must call on Him with all of his heart. Let us pray for the victims of this terrible attack and their families the way we would like others to pray for us. It’s in times like these when we need God’s presence and comfort the most. May God be with all of us and our nation.”

A voice was heard in Ramah wailing and loud lamentation Rachel weeping for her children she refused to be consoled because they are no more.

“The Coral Springs community, like other communities affected by such cruel and avoidable violence, will emerge from this tragedy stronger than ever. Now the onus is on the leaders who we entrust to ensure the safety and security of our country’s citizens to show such strength and resilience to set politics aside and do the necessary.

“As Hindu Americans, we see the enacting and enforcing legislation that keeps military-grade firearms out of the hands of the general public, as solidly rooted in Hindu dharma. The ancient holy text, the Mahabharata, reminds us that: ‘Dharma exists for the general welfare of all livings beings; hence, that by which the welfare of all living beings is sustained, that for sure is dharma.'”

We need to put PRAYER back into the public schools... #floridastrong

“As news continues to come out from the horrific gun violence in Florida we cry out ‘How long Lord?’ How long must we wait before we as a nation do something to stop the violence? Even as our hearts break with those who have lost their loved ones, our spines stiffen as we recommit ourselves again and again to the cry ‘not one more death’ to gun violence. … I call upon all leaders of faith and all people of moral courage to join together to create a sane gun policy in our country so that the events in Florida will never happen again and no parent must shed the tears that cannot be comforted in the loss of a child.”

Praying for those affected by the Parkland high school shooting. "The Lord is near to the brokenhearted and saves the crushed in spirit." - Psalm 34:18 #PrayingforParkland

Tim Clinton, president of the American Association of Christian Counselors

“This tragedy, like so many before, highlights the glaring need for our country to better understand and destigmatize mental health issues. I agree with Broward County Public School Superintendent Robert Runcie who said mental health issues, ‘need to be addressed within our school systems as well as the broader society to make sure these tragedies don’t continue.’ To prevent these atrocities we must identify and reach out to those who need our caring intervention, guiding them to healing and away from potentially harmful decisions. For today, though, we must focus our efforts on comforting the brokenhearted and those traumatized by the evil they encountered.”

I’m bipolar. I don’t shoot up schools. Come up with a better argument. #parkland #mentalillness

Rabbi Rick Jacobs, president of the Union for Reform Judaism

“What is our response to the question of how a good God could let this happen to anyone? To some of our very dearest. To young people and their families. No one can speak for the Holy One but I find it impossible to hold God responsible for this callous slaughter.

“Rather, I can imagine the Holy One sobbing along with (us), distraught over the senseless bloodshed we’ve collectively allowed to happen. Human care for one another, perhaps Divinely inspired, is what is desperately needed right now.

“What’s also needed is action. … There was no reason to expect this shooting at this time and in this place, but there was every reason to believe that violence like this would be unleashed again. And again and again until we take meaningful action.”

Historians will write of the United States of America:
"They practiced human sacrifice."#GunReformNow

“There is no way a troubled teenager should have had access to an AR-15 semi-automatic rifle and what was described as ‘countless magazines’ full of high-powered bullets. Even as we mourn this unnecessary loss of life, we call on our lawmakers to shake off fear of the gun lobby, distractions of other legislative matters, and the paralysis of hyper-partisanship and take action to ensure universal background checks be enacted and high powered weapons be taken off the streets of our nation.”

When Cardinals Cupich & Chaput are on the same page, it's time for the USCCB to make it a priority. #Parkland

"Let us make it clear to our elected officials that the weapons and ammunition that facilitate this carnage have no place in our culture." pic.twitter.com/uDlAMiHfyf

Cardinal Daniel DiNardo of Galveston-Houston, president of the U.S. Conference of Catholic Bishops

“Catholics and many other Christians have begun the journey of Lent today. I encourage us to unite our prayers and sacrifices for the healing and consolation of all those who have been affected by violence in these last weeks and for a conversion of heart, that our communities and nation will be marked by peace. I pray also for unity in seeking to build toward a society with fewer tragedies caused by senseless gun violence.”

Statement from Ahmadiyya Muslim Community about yesterday's #Parkland shooting. We are hosting a prayer service open to all those mourning with us. pic.twitter.com/llmd8lhSdE

“Many of the teens affected by the tragedy at Marjory Stoneman Douglas High School were known closely by our participants and alumni. Our hearts go out to each and every person who is grieving today. We are angry and devastated that we have to mourn our peers, who went to school yesterday on an ordinary day, like many NFTY teens, but didn’t come home.”

Some families woke up this morning in the debris of the world they once knew.

Today we pray for the courage to mourn with them and act to make yesterday unimaginable. #GunReformNow