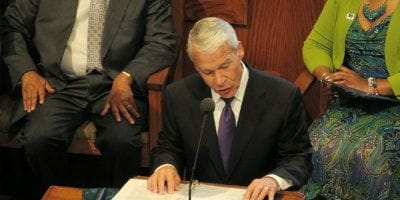 Megachurch founder Isaac Hunter, who is son of another megachurch pastor Joel Hunter, was found dead in an apparent suicide, according to the Orlando Sentinel.

Isaac Hunter, 36 and father of three, had resigned from the megachurch he founded after he admitted that he had engaged in an affair with a staff member. His wife of 13 years had filed a domestic-violence petition against Hunter, describing him as unstable, erratic and suicidal, according to the Sentinel. Hunter’s resignation in the fall of 2012 was one of three Orlando pastors who left their pulpits after admitting affairs.

Joel Hunter has been a spiritual adviser to President Obama. Hunter’s spokesman said the Hunter family does not have a statement at this time.

The following statement was posted on the Northland, A Church Distributed website.

“By now you may have heard that Pastor Joel and Becky’s son Isaac Hunter died today. All of us are grieving for the Hunter family, and we will deeply miss Isaac. Words cannot express the sorrow we’re feeling,” said Vernon Rainwater, a Northland pastor. “We love this family and are so grateful for the impact they have had on each of our lives. I have loved Isaac since he was a child, and I know this … Isaac loved Jesus. And we are assured of his continuing relationship with Christ now in heaven.”

My heart is broken for the Joel Hunter family in the loss of their beloved Isaac. No words, just tears.

Cameron Strang, editor of Relevant magazine, posted on Facebook that Isaac Hunter had been his pastor for several years.

“Please pray that somehow, some way, someday, good will ultimately come of this,” Strang wrote. “That this tragic story can be used to reach and rescue others who are silently battling the same demons Isaac did.”