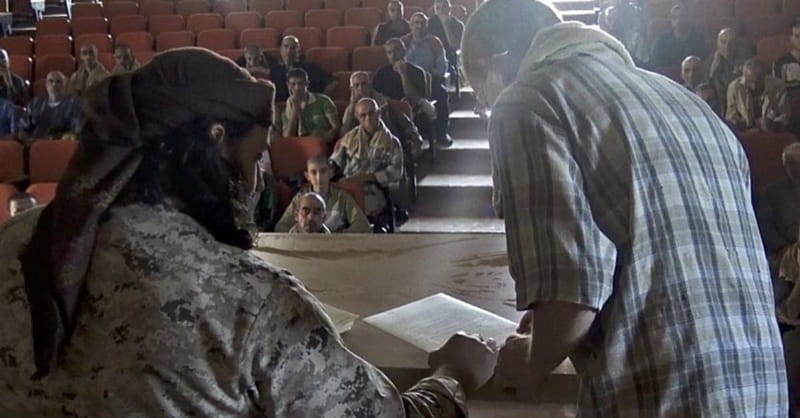 In the video, the group threatened to kill some 200 other Christians in Syria unless it receives a ransom of $50,000 each for their release.

In the video, three men dressed in orange jumpers are shown kneeling in the sand. The men then give their names and the town they came from. Seconds later, three men in desert uniform each raise a handgun behind the head of each Christian and fire their weapons. The Christians’ lifeless bodies then fall forward, face down.

After the shooting, three other Christians are shown kneeling in the sand behind the bodies of the just executed men. As with the video’s first segment, the men are made to recite their names. In an apparently scripted moment, one of the Christians then points to the bodies on the ground and says, “Our fate is the same as these if you do not take proper procedure for our release.”

The three men who were killed and the three that remained were part of a group of at least 250 Assyrians who were abducted by IS in February, when the group pushed though the Khabur River Valley in Hassakah Province and attacked dozens of Assyrian villages. Islamic State later released 48 hostages, and it has demanded a total of more than $10 million for all of those abducted. IS gave no deadline, but it said if the ransom isn’t paid, the remaining hostages would be executed.

The videoed execution is thought to have taken place on Sept. 23 during the Muslim holiday of “Festival of the Sacrifice,” according to Arabic-language news media.

The video came days after IS released another video about the “submission tax” imposed on Christians in the town of Al-Qaryatayn. IS attacked Al-Qaryatayn on Aug. 5, all but defeating it the same day. The video shows IS fighters demolishing parts of church buildings and destroying religious-themed paintings after the takeover of the town.

The voice of a religious leader plays as scenes appear of IS troops tearing the crosses off the tops of church domes. The leader talks about the IS fighters who seized Al-Qaryatayn.

“They are merciful toward the believer but harsh and forceful toward the infidels,” the leader says. “They are following the steps of the Holy Prophet, peace be upon him, Muhammad, and put a smile on the faces of the Muslims in the town who described their joy and happiness toward the rule of Islam. As for the situation of the Nazarenes [Christians], a group of them converted to Islam, while others made peace and signed an Al-Zema [Dhimma] contract and preferred to live and enjoy the peace and safety under the ruling of Islam in the Islamic State.”

IS had previously issued photographs of Christian men gathered in an auditorium signing the Dhimma document, which delineates their second-class status, in September.

The Christians who stayed in Al-Qaryatayn had to agree to the following conditions:

1. Christians may not build churches, monasteries, or hermitages in the city or in the surrounding areas.

2. They may not show the cross or any of their books in the Muslims’ streets or markets and may not use amplifiers when worshiping or during prayer.

3. They may not recite from their books or ring church bells loud enough for Muslims to hear.

4. They may not carry out any act of aggression against IS, such as harboring spies and criminals. If they come to know of any plot against Muslims, they must report it.

5. They must not perform religious rituals in public.

6. They must respect Muslims and not criticize their religion.

9. They may not engage in business activity involving pigs or alcohol with Muslims or in Muslim markets, and they may not drink alcohol in public.

10. They will maintain their own cemeteries.

11. They must abide by IS dress code and commerce guidelines.

If the Christians break this contract than, according to the contract they will face, “the same conditions as the people of the war.”

The leader closed with a message to Christians around the world and to the United States, “The protector of the Cross.”