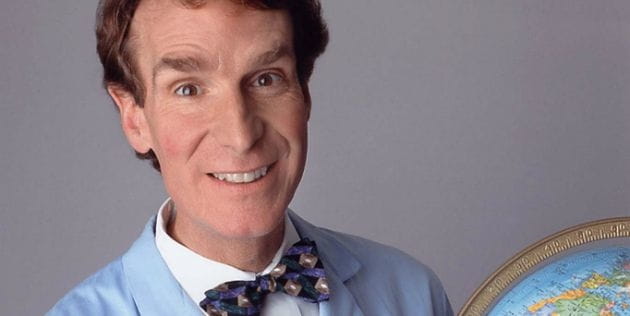 (RNS) Bill Nye may be “The Science Guy,” but Ken Ham is the “Answers in Genesis” man, and a debate between the two over the origins of life has nonbelievers and Christians wringing their hands.

Nye, host of a beloved television science series, and Ham, president of a creationist apologetics ministry, will meet at the Creation Museum, where Ham is also the president, on Feb. 4. In what some wags are calling “the Ham-on-Nye debate,” they will weigh this question: “Is creation a viable model of origins?”

In truth, both sides answered that question long ago — Nye with Charles Darwin’s work on the origin of species and Ham with the first book of the Bible. Yet many observers — both religious and nonreligious — say the debate is a very bad idea.

“Scientists should not debate creationists. Period,” wrote Dan Arel on the Richard Dawkins Foundation’s website. “There is nothing to debate.”

Arel, a secular advocate, is echoing the position of Dawkins, an evolutionary biologist and outspoken atheist who has long refused to debate creationists.

“Winning is not what the creationists realistically aspire to,” Dawkins said in 2006. “For them, it is sufficient that the debate happens at all. They need the publicity. We don’t. To the gullible public which is their natural constituency, it is enough that their man is seen sharing a platform with a real scientist.”

In a twist that might surprise Ham and Nye, some Christians find themselves agreeing with Dawkins.

“It is this huge stereotype that all Christians reject science and an event like this reinforces that stereotype,” said Deborah Haarsma, president of the BioLogos Foundation, an organization whose motto is “science and faith in harmony.” “It looks like science versus Christianity and it ignores the people who have accepted the science of evolution and have not let go of their faith.”

And that is a considerable number of people. A 2013 Pew Research Center poll found 60 percent of Americans believe “humans have evolved over time” while 33 percent reject that statement. Of those who believe in evolution, 24 percent say they also believe “a supreme being” used evolution to create life forms.

“A debate like this sets up a false choice” between science and religion for viewers, Haarsma said. “We don’t want them to have to choose.”

Other Christians are concerned that Nye, an inexperienced debater with a background in engineering, will not perform well against Ham, a skilled debater. Tyler Francke, a 25-year-old Christian who writes about the intersection of science and religion at the blog The God of Evolution, said he knows many “young Earth creationists,” as Ham and his supporters are called, and that the presentation of scientific evidence alone is not enough to persuade them.

“Young-Earth proponents like Ham have all kinds of tricks they play to make their view seem reasonable,” he said. “They claim they don’t ignore evidence they just look at it with a different lens.  … Bill Nye seems to be a very smart man, and I’m confident that he’ll come prepared. But if he shows up expecting a fair fight purely on the basis of what the available evidence most reasonably indicates, I think he’s going to be sorely mistaken.”

Nye may be an inexperienced debater, but he has a background in entertainment. He has hosted six popular science television shows — including the irreverent and informative “Bill Nye the Science Guy” — and appeared on “Dancing with the Stars” — where he was the first contestant to get the hook in its 17th season.

“Bill Nye is not a professional scientist; he is an entertainer and a science communicator,” said Joshua Rosenau, policy director at the National Center for Science Education, an advocacy group that discourages scientists from debating creationists. “So I am optimistic this could turn out better than some others. But don’t try this at home, kids.”

Both men have described their reasons for engaging in the challenge. Nye, an agnostic, told The Huffington Post he hopes “to show people that this belief (creationism) is still among us and it finds its way onto school boards.”

Indeed, there have been four laws introduced at the state level that challenge evolution in public school science curricula just this year — two in Missouri, one in Virginia and one in Oklahoma, according to the National Center for Science Education. Currently, laws in Texas, Louisiana and Tennessee permit the teaching of “alternatives” to evolution.

As for Ham, he has said he extended the debate invitation to Nye out of concern that young people are too quick to dismiss creation in favor of evolution. But critics note another reason — the financial rewards of increased media attention. The Creation Museum is up against a deadline for raising $29 million in municipal bonds to construct a proposed replica of Noah’s Ark. Even if he loses the debate, critics say, Ham wins at the bank.

In fact, the debate, which will be held in the Creation Museum’s 900-seat Legacy Hall in Petersburg, Ky., sold out its $25 tickets within minutes. The museum will stream the event live and for free.

But while some of the strongest voices against the debate have come from the non belief community, some nonbelievers are looking for a silver lining.

Maggie Ardiente, director of development and communications for the American Humanist Association, went to so far as to say she wishes the debate had been her idea.

“It is very simple,” she said. “I am looking at statistics (like the Pew Research Center’s poll) and they tell me people like Ken Ham and other creationists are being very effective and that is a serious problem. We can’t just ignore that. We have to challenge people like Ken Ham so I support the debate 100 percent.”

Debbie Goddard, director of outreach for the Center for Inquiry, another humanist organization that supports science education, is less certain. She said she was “originally on the fence” when she heard about the debate, concerned it would only attract the already convinced, but has reconsidered.

“If we don’t let their ideas see the light of day we can’t develop the tools to address them,” she said. “And we don’t just need the tools of facts and evidence, but also of understanding their views and compassion for them if we want to be effective at changing their minds.”