For Mother’s Day, a Place to Mourn the Babies Who Never Came Home 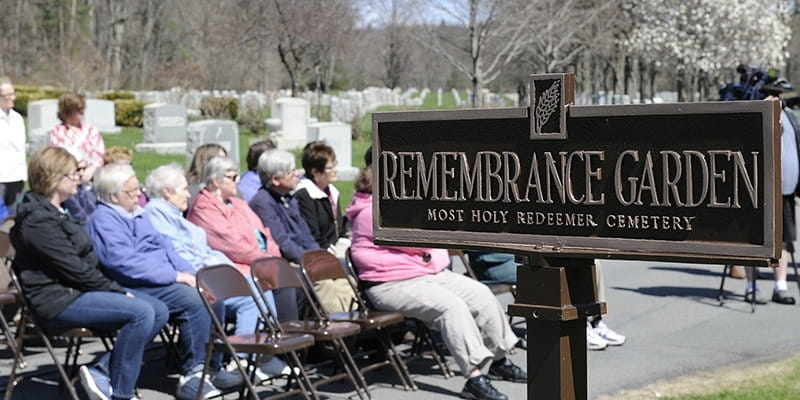 For Mother’s Day, a Place to Mourn the Babies Who Never Came Home

The night she miscarried in 1968, Dorothy Caruso remembers remaining calm, as if she was watching someone else losing a much-wanted pregnancy. The baby was about three months along; she’d already bought a white baby sweater and a set of blocks.

The day before, her doctor had suspected an imminent miscarriage, and gave her instructions. And so just as directed, Caruso, a New Yorker then living near the Army base in Germany where her husband was stationed, put the remains of what was to have been a son in a glass jar.

Because she was Catholic, she found the holy water she always kept in the house, and baptized him.

It took 47 years for Caruso to speak of what happened at the hospital the next day.

“I remember the nurse coming in,” Caruso, now 69, said on the grounds of Most Holy Redeemer Cemetery, outside Albany, N.Y. “She took the jar, and says, ‘Oh yes, this is what we’ve been waiting for,’ and threw it in the garbage can, right in front of me while I was on the gurney.”

“That’s all I remember. She took it and threw it in the garbage.”

Today mothers who miscarry benefit from more modern attitudes toward pregnancy loss. Many hospitals now give families time to say goodbye to stillborns. They ask if clergy should be called, and partner with photographers who can provide a lasting image of a baby who won’t be going home.

Most Holy Redeemer’s Remembrance Garden honors the youngest of lost lives, and comforts young, recently bereaved parents. But its creation two years ago was inspired by an earlier generation of mourners.

Like Caruso, these mothers never had an opportunity to grieve for their lost children, and they never had a say in what would happen to their remains.

In Catholic tradition, often the father and a priest would whisk the baby away, bury it in what was most often an unmarked grave, and tell the mother nothing.

How could it help her, they thought, to dwell on such sadness?

“Many fathers died taking the secret to their graves,” Lori Biskup, Most Holy Redeemer’s family service manager, said at an April 28 memorial service at the Remembrance Garden.

“We have had couples, adult sisters and brothers, grandparents and widows and widowers searching for babies that they never knew what happened to them,” Biskup said.

“Sometimes we were able to locate the babies; too often we were not.”

In all, there were two dozen Catholics at the ceremony, both devout and lapsed, from 20-somethings to octogenarians. They sat in folding chairs before a bronze statue of Rachel, the biblical archetype of the grieving mother, and sang and prayed together for their losses.

Caruso was there, honoring the son she didn’t get to raise.

Staff at Most Holy Redeemer, who situated the Remembrance Garden next to a pond near the cemetery’s entrance, said they know of no other cemetery that offers anything quite like it. But they had fielded too many phone calls from families deprived of the chance to grieve, they said, to ignore the need for such a place.

For mothers like 94-year-old Jeane A. Marchitto, the pain of the loss persists across the decades, even after they have birthed and raised other children.

On Jan. 16, 1944, Marchitto went to an Albany hospital to deliver what would have been her first child, who was due two months later.

“I never saw the baby because I was hemorrhaging badly,” she recalled.

Hours later, recovering in a maternity ward filled with women reveling in their first hours of motherhood, a nurse asked if she would like the hospital to take care of the remains of her infant.

None of the remains of the 26 babies — miscarried, stillborn, and short-lived — whose names are engraved on paving stones or metal butterflies at the Remembrance Garden are actually interred there. But to the families who gathered at the memorial last month, the plot is sacred ground.

“The garden says to us: You matter,” Biskup told them. “Your baby existed. He or she matters. We remember.”

Suzanne Durden moved to Atlanta more than three decades ago, but attended the dedication of the Remembrance Garden, in the summer of 2013, to honor three babies she never saw.

She lost a boy she named Justin in her seventh month, and he was buried in a nearby Catholic cemetery, 45 years ago. She is not sure where the remains of two other boys lie, both lost earlier in pregnancy.

“It was kind of like everybody just wanted to forget it,” said Durden, now 70. “It never goes away and it does affect a woman for her entire life.”

What bothered her most, she said, was that she had never named two of the babies. Now she has three pavers at the Remembrance Garden, one for Justin, and one each for boys she now calls Michael and Gabriel, after the archangels.

“I often think how different my life would have been had they have lived,” said Durden, who envisions the Virgin Mary cradling her lost sons until she is reunited with them in heaven. “It was a total gift from God for me to be at the garden that day.”

Not every woman mourns a miscarriage as a lost child.

Fetal demise at less than 20 weeks, or miscarriage, is exceedingly common, occurring in 15 percent of known pregnancies, according to the American College of Obstetricians and Gynecologists. It is impossible to track the number of cases in which miscarriage occurs and a woman never realizes she was pregnant.

A pregnancy lost at 20 or more weeks, after the midpoint for most pregnancies, is termed a “stillbirth.”

In general, the closer the pregnancy to term, the more painful the loss, said Bonnie Steinbock, a bioethicist who has written extensively on the legal and moral status of the fetus. But for a woman who has been trying to get pregnant for a long time and finally does become pregnant, the loss of even a very early pregnancy can be traumatic, she said.

A woman’s religious beliefs can also play into her response to miscarriage.

“If you come from a Catholic upbringing and you think of a very early embryo as a person like anybody else, just hidden from view in a woman’s body, then you’re going to have a different reaction than if you had a different upbringing,” Steinbock said.

For many of the women who take comfort in the Remembrance Garden, another lesson from their Catholic education could make coping harder. Caruso, for example, said she was taught that an unbaptized baby would not go to heaven.

The theory, first elaborated upon in the Middle Ages and still believed by some devout Catholics, holds that the soul of an unbaptized infant is consigned to neither heaven nor hell, but “limbo,” a place where children would never unite with God or their mother.

She is not so sure.

Vito Caruso was away on duty, and their apartment in Germany had no phone to call a priest, when Dorothy Caruso, then 22, lost her pregnancy and decided to baptize the child herself.

Marchitto, the 94-year-old who regrets allowing the hospital to handle her son’s remains, said her burden eased when a nurse who had been in the delivery room — a high school acquaintance who knew she was Catholic — told her that she had baptized the baby.

“It didn’t erase what I had done,” Marchitto said. “But what a gift.”

In 2007, the Catholic Church clarified its teaching on babies who die unbaptized, giving devout Catholics hope for their child in the hereafter.

Though an infant should be baptized as soon as reasonably possible after birth, that doesn’t mean parents should despair of these children’s salvation if that doesn’t happen — “quite the contrary,” said the Rev. Peter Ryan, executive director of the Secretariat of Doctrine and Canonical Affairs at the U.S. Conference of Catholic Bishops.

“A Father who sent his own son for our salvation wants each person to find salvation,” he explained. “You know that the Lord has a heart for that infant.”

As for the baptism of babies never born, the church teaches that “the sacraments are for the living,” he said, but if there is any doubt of the presence of life, baptism should proceed if possible.

‘Sometimes I get so mad at myself’

Most Holy Redeemer welcomed all last month who want to remember their lost babies, no matter where they stood with their faith.

Jennifer Kellar lost her son, Christopher Matthew Sifka III, to sudden infant death syndrome on Nov. 10, 2014. He was three months old. She brought her boyfriend, the baby’s father, to the Remembrance Garden ceremony.

“I was raised Catholic,” Kellar, 34, said after the service. “But I didn’t follow it for years.”

Her day at the garden was one of the better days she’s had since Christopher’s death, she said, because she felt less alone in her grief. “Anything we can do to remember him, we do.”

Kellar has two other children, ages 15 and 7. Marchitto, after her loss in 1945, bore two healthy sons and a daughter. Durden, the Atlanta mother, has a grown daughter and son. And Dorothy and Vito Caruso adopted two babies from Korea — Rebecca and Rachel — now 38 and 41.

What universally pains these mothers is when well-intentioned friends and family, remarking on the babies that died, tell them how lucky they are to have gone on to be parents to other children.

They do feel lucky. But they miss the ones they lost.

Caruso, for the first time this year, went to the memorial service where a paver, beneath the statue of Rachel, honors a boy named for her husband, Vito Aristo. She still wonders why she didn’t speak up when the nurse trashed his remains.

“Sometimes I get so mad at myself,” she said. “Why didn’t I say something? Like ‘How dare you? Give that back to me!’”

Here in the garden, she finds some peace.

“I don’t know if you want to call it closure,” she said. “It’s just nice to know that, 47 years later, you haven’t forgotten.”

Photo: People take part in a memorial service at the Most Holy Redeemer Cemetery in Niskayuna, N.Y., on April 28, 2015. The ceremony, in the cemetery’s Remembrance Garden, honors babies lost before and after birth.