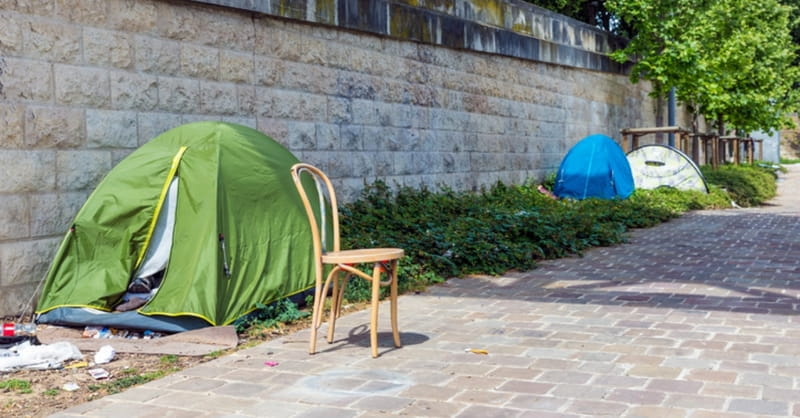 It’s near freezing when tents begin appearing on Avénue du Président Wilson. Migrants are getting ready for another November night. Their evening ritual creates an impromptu camp in a pedestrianized median on the north side of the city, near the Metro at Porte de la Chapelle.

I greet many of the men as I trail along behind a more expert friend who visits this spot weekly. She is Egyptian and comes like a sister, in the name of Christ, herself a stranger in France.

Some men are waiting to be processed as asylum seekers. Others want to avoid deportation after having asylum claims denied. They are among thousands who have inundated Paris, up to 80 per day. Across Europe, more than 178,000 migrants sought new homes in 2017. Most come from Muslim-majority nations in Africa.

Mahamat is angry. Murderous even. He tells me he plans to kill three people the next day. “They treated me like I’m a slave!” he roars.

Mahamat comes from a town in Chad where I once rented a house, planning to work with a nongovernmental organization there. My move never happened, but my exposure to the place means we have some shared spaces, shared memories, and that strikes a chord. Mahamat talks, and I listen. Telling me his ordeal seems to lower his rage. He smiles at my exhortation to patience, and I’m reassured he will not kill anyone.

We discuss God’s power to change things—to order events so Mahamat might be allowed to stay in France. Though feeling ill-treated here, he faces worse trials at home, and his journey isn’t over yet. “I spent 47 nights sleeping along the road to get to Paris. And now they say I have to return to Italy—because that’s where I entered Europe and got fingerprinted,” he said.

But there is no going back home for Mahamat. Like most in the camp, he says he came to provide for his family. He will risk living illegally if the asylum papers never come. Out of 87,775 seekers, France gave asylum to just one-third in 2016.

Samir Salibi believes these migrants represent a huge opportunity. Last year the IT engineer began a ministry called @home to “form a team of disciples that will impact this community.” He himself came to faith in Christ two decades ago as an immigrant to France. He now mobilizes volunteers to distribute food, blankets, and other items. The volunteers also invite migrants to worship services and Bible study and into people’s homes. And they come. Samir aims to integrate refugees into society through French classes. But he told me @home is really about being a church family where refugees can feel at home and loved.

As I leave, I consider what will happen to the men at Porte de la Chapelle—and others already here for months or years. The UN has proposed funding migrants’ return home from awful conditions in Libya, where some are enslaved, before they even attempt the perilous trip to Europe.

Antonio Tajani, president of the European Parliament, said the continent needs a strategy for the nearly 6 million migrants now waiting in countries bordering the Mediterranean. But the November summit of more than 80 African Union and European Union leaders, held in Abidjan, Ivory Coast, did not produce a clear strategy for meeting the immense challenge that @home volunteers are tackling one person at a time.