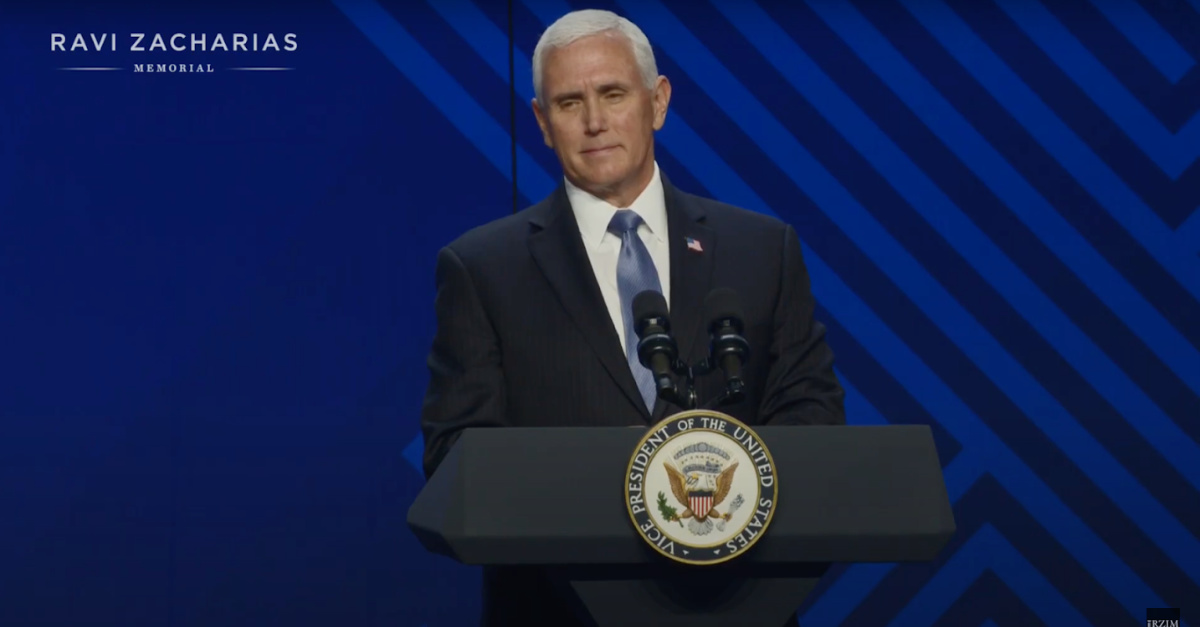 On Friday morning, Vice President Mike Pence, Tim Tebow, Louie Giglio, Matt Redman, Lecrae and others participated in a memorial service for well-known Christian apologist Ravi Zacharias. Zacharias died on May 19 and was buried in Georgia on May 21. The May 29 memorial service was intended to be a celebration of Zacharias’s life, ministry and legacy.

Vice President Pence started out by noting that Zacharias’s passing came “at a time when so many families around the world are grieving the loss of loved ones.”

Pence then spoke of how important Zacharias’ ministry has been to him personally and to the Christian church as a whole, Fox News reports. Speaking personally of Zacharias, the Vice President said, “God put him at my side at just the right time, with a word of wisdom, kindness and encouragement that I’ll never forget.”

Some of the most moving tributes from the service, which lasted close to two hours, came from Zacharias’s own family. His brother Ramesh told the crowd that “You knew him as an apologist. To me, he was a brother.” He said that Ravi’s life showed what God could do through one person who was totally committed to serving him.

Ramesh also spoke of Ravi’s conversion. He said that Ravi survived a suicide attempt when he was a teenager. Their mother sat by his bedside and read the Bible to him. This led him to commit his life to Jesus.

Christian rapper Lecrae talked about how he wanted his peers to have answers to have hard questions. He said that listening to Zacharias helped him understand how to give the reason for the hope within him to his friends. He said he wanted to honor Zacharias for the legacy he left all over the world. He also performed his song “Tell the World” as a tribute to Zacharias’s passion to tell the world about Jesus.

Jude McNeil, Zacharias’s grandson also spoke shortly. He said that he and his cousins “lost the best grandfather in the world.”

This was not going to be enough. Because of the limits of language, not the limits of time. “He was the man who has always loved me.”

Tim Tebow testified to the influence Ravi Zacharias had in his life. The former Heisman Trophy winner and current baseball player in the New York Mets organization described Zacharias as not just a brother in Christ, but as “a friend, a teacher, and a hero.” He told viewers that he was by Zacharias’s bedside in the days before he died and spoke of his hope in Christ.

Louie Giglio, pastor of Passion City Church and founder of the Passion Movement, opened and closed the service. He said his goal in the service was to honor Jesus and to honor “a life lived well.”

He spoke extensively about Zacharias’s hope in Jesus Christ. He said, “Ravi is very much alive today. Ravi is home. Ravi is healed. Ravi finished his race.”