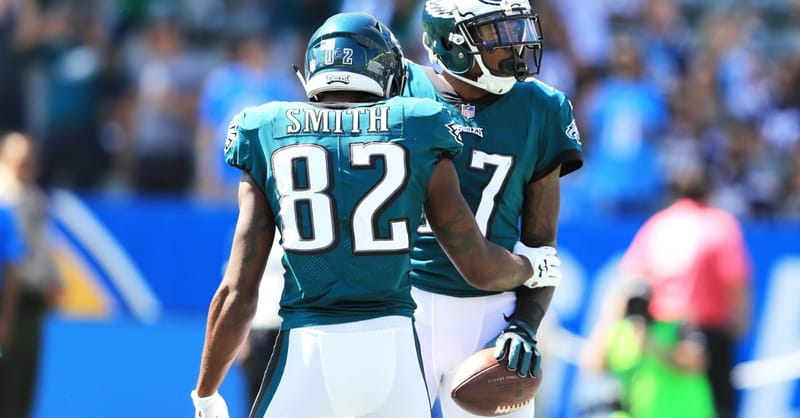 Philadelphia Eagles wide receiver Marcus Johnson will remember October 12, 2017, for more than his team’s 28-23 victory over the Carolina Panthers. Hours before the game, he shared a picture of his baptism in a hotel pool on Twitter. Teammates joined hands and bowed their heads along the side of the pool for the special moment. Johnson captioned the photo “First time being Baptized! Corporate Worship is a beautiful thing!! Cleansed & Reborn in JESUS name!! #WholeHeartedly.”

The Eagles are no strangers to open spirituality in the locker room. Quarterback Carson Wentz is outspoken about his desire to play for “an audience of one.” Wentz sports the phrase on a tattoo on his wrist and named his foundation, which serves underprivileged youth, provides hunting opportunities for veterans and people with physical disabilities, and gives service dogs to children and youth in the Philadelphia area, “AO1.” Wentz’s faith in Christ drives the purpose of his foundation. The foundation describes its mission, saying, “Similar to Carson’s life motto and the tattoo on the underside of his right wrist, Carson’s foundation stands for ‘Audience of One.’ No matter what he does in life, Carson is living for an Audience of One – Jesus.”

Wentz, quarterback Nick Foles, safety Chris Maragos, tight end Zach Ertz and wide receiver Jordan Matthews, now with the Buffalo Bills, worked together on a 15-day study in the YouVersion Bible app. The study, “Professional Football Players on Humility and Surrender” contains readings and testimonies from the players on living under the Lordship of Christ. Wentz also has a four-day devotion on the app titled, unsurprisingly, “Audience of One.”

Johnson ended his memorable day by catching one pass from Wentz for sixteen yards in their victory on the Panthers’ home field.