Franklin Graham Asks Oregonians to Pray Their Governor Will “Get Saved” 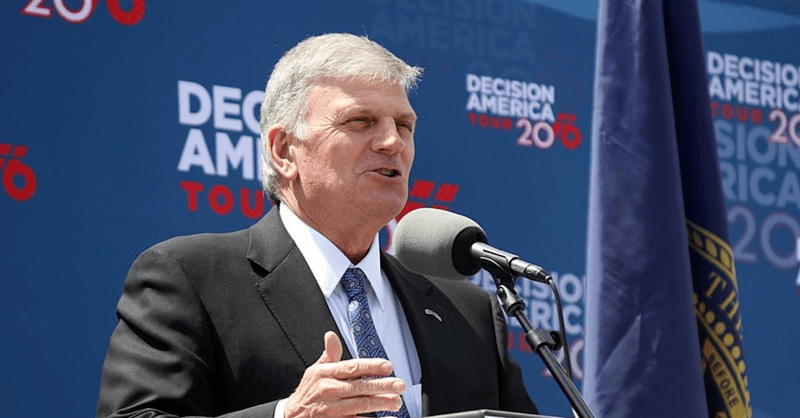 Franklin Graham Asks Oregonians to Pray Their Governor Will “Get Saved”

Evangelist Franklin Graham recently asked Oregonians to pray for the salvation of Governor Kate Brown. She responded with a vague statement about her spiritual beliefs.

Preaching at the Clackamas County Fairgrounds in Canby, OR, Graham told the crowd of more than 12,000, “Let's pray for your governor, Gov. Brown.” Then he queried, “Wouldn't it be something if she got saved?” Graham then prayed, “that she would come to know your son Jesus Christ as her lord and savior one day.”

His comments about and prayer for Governor Brown came during his third sermon in a seven-city trip through Oregon and Washington.

Graham preached, but also had plenty to say about this year’s mid-term elections. Graham said Christians could swing the balance of power in the state. He said, “If the church went to the polls and voted, you could turn this state around. The enemy out there thinks the church is asleep.”

Graham refused to tell people how to vote but told them during his sermon on Sodom and Gomorrah that, “We need to vote for candidates who are going to defend not only our Constitution but who are going to defend our religious freedoms.”
Brown responded to Graham’s comments during a phone call with reporters later in the week. “I believe that each one of us has a spirit living within us and we have to acknowledge the spirits within all of our human beings.”

Reporters asked the Governor, who faces a re-election challenge from Republican Representative Knute Buehler, if she attended church or observed any religious practices. She responded, “I have a meditation practice and I am a yogi.”

She later explained that she did not regard yoga in religious terms and does not consider herself an agnostic. She elaborated on this point, saying, “I believe very much that each one of us is spiritual beings. And that’s how I see the world. For me, it’s about [being] on a path of treating human beings with respect, and that I want to make sure that’s honored in my work and my day-to-day life.”

Governor Brown’s beliefs mesh with those of many other Oregonians. Only 29 percent of the state’s residents say they are “very religious,” making the state one of the most unchurched in the country.