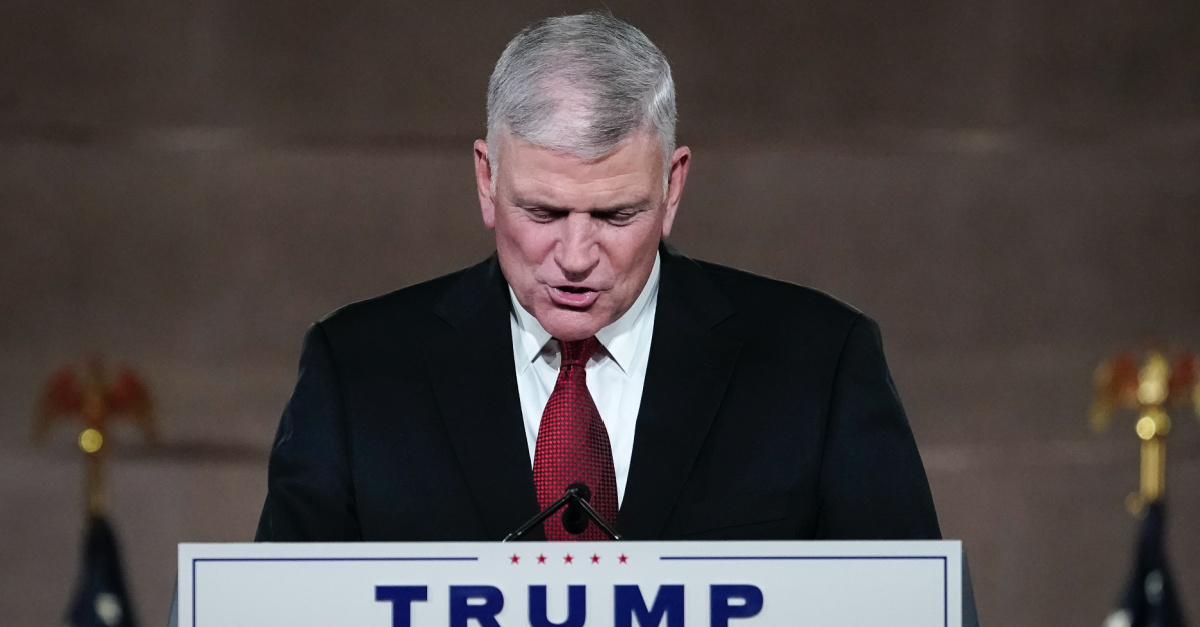 Faithful America, a left-leaning Christian activist group, is urging Samaritan’s Purse to remove Evangelist Franklin Graham as its President and CEO after he prayed at the 2020 Republican National Convention last week.

In the petition, the group asserted that if the directors of Samaritan’s Purse “truly believe in their ‘purpose of sharing God’s love,’” then they would oust Graham.

“The final night of the 2020 Republican convention began with a partisan appearance from notoriously homophobic preacher Franklin Graham, who prayed, ‘I thank you tonight for our president, Donald J. Trump ... in the mighty name of your Son,’” the petition stated.

“Standing behind a Trump-Pence campaign sign, Graham also used Jesus's name to give thanks for ‘the many blessings we have received these past four years.’ We would hardly consider family separation, the deadly federal COVID-19 response, rampant corruption and authoritarianism, or ongoing systemic racism to be ‘blessings,’” the group asserted.

“While Faithful America commends Samaritan’s Purse for their ‘important work for the sick and poor,’ Graham’s ‘hateful politics’ and support of President Trump is damaging the credibility of the international Christian aid organization,” the petition added.

The group then asserted that “if the directors of Samaritan's Purse care about their credibility – and if they truly believe in their ‘purpose of sharing God's love’ – then Graham's hateful support for Trump should show them that it's time to find a new chairman and CEO.”

The petition then urges members who agree with Faithful America’s position to “take a personal stand” and tender their resignation if the entire board does not vote to remove Graham from his leadership positions.

Samaritan’s Purse responded to the petition telling The Hill that Graham “does not tell people who to vote for, but he does encourage everyone to pray and to vote.”

They added, “If the Democratic National Convention had asked him to pray, he would have prayed at the DNC as well. The most important thing any of us can do for our nation is to pray for our leaders, regardless of their political affiliation.

“Franklin Graham continues to lead Samaritan’s Purse and the Billy Graham Evangelistic Association with the purpose of sharing God’s love and the truth of the Gospel of Jesus Christ with hurting people around the world. Under Franklin’s leadership, Samaritan’s Purse is committed to providing spiritual and physical aid to victims of war, poverty, natural disasters, disease, and famine, as evidenced by our relief efforts in more than 130 countries over the past 50 years,” the group concluded.

Franklin Graham, the son of the late evangelist Billy Graham, has been serving as Samaritan’s Purse’s President, Chairman and CEO since 1979.

At the time of this writing, the petition has just over 13,000 signatures.