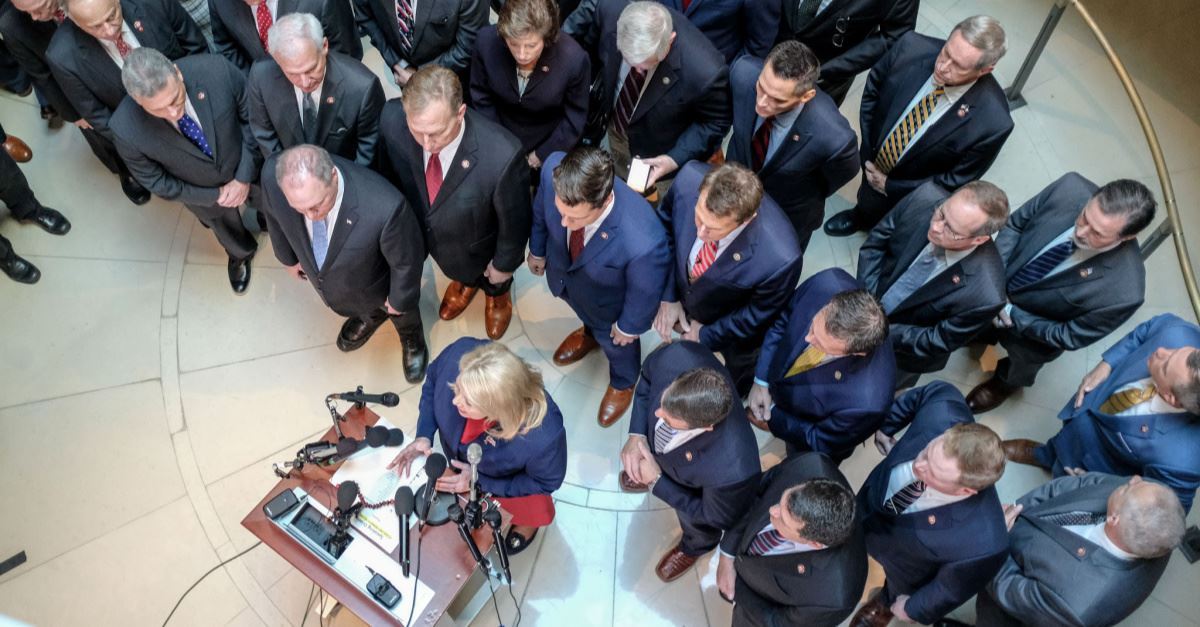 Several angry Republicans barged into a closed-door Democrat-exclusive hearing on the impeachment inquiry on Wednesday.

House Minority Whip Steve Scalise (R-La.) and several other lawmakers interrupted Democrats who were preparing to listen to the testimony of Laura Cooper, the deputy assistant secretary of Defense for Russia, Ukraine and Eurasia, according to The Hill.

“The fact that Adam Schiff won’t even let the press in—you can’t even go in and see what’s going on in that room,” Scalise said. “Voting members of Congress are being denied access from being able to see what’s happening behind these closed doors, where they’re trying to impeach the president of the United States with a one-sided set of rules, they call the witnesses.”

According to Ari Fleischer, a former White House press secretary, previous impeachments were not handled so privately.

“Our nation has had 3 serious impeachments,” he said in a tweet. “Andrew Johnson, Richard Nixon (until he resigned) and Bill Clinton. Not this one. With secret testimony, secret transcripts and selective leaks, this one is a dirty impeachment. It’s wrong and it’s no way to treat a POTUS, any POTUS.”

Our nation has had 3 serious impeachments. Andrew Johnson, Richard Nixon (until he resigned) and Bill Clinton. Not this one. With secret testimony, secret transcripts and selective leaks, this one is a dirty impeachment. It’s wrong and it’s no way to treat a POTUS, any POTUS. https://t.co/jPRNdi9ObO

Republicans are growing in their frustration over the Democrat’s handling of the inquiry. Only members of the House Intelligence, Oversight and Foreign Affairs committees are allowed to attend hearings and depositions. They also believe that Democrats are selectively and slowly leaking information to the press as they choose while foregoing a formal House vote on the inquiry despite precedent.

Nonetheless, Democrats have argued that they are following House rules for impeachment inquiries and that these meetings are necessary to discover the facts.

“There’s no requirement that we have a vote, and at this time, we will not have a vote,” Pelosi said, according to Politico. “We’re not here to call bluffs. We’re here to find the truth, to uphold the Constitution of the United States. This is not a game for us, this is deadly serious.”

Some Democrats believe that Republicans are fighting against the probe because there is “far too much fact for their comfort level, so they have to try to stop it from moving forward,” according to Debbie Wasserman Schultz (D-Fla.).

As for any future meetings, House Minority Leader Kevin McCarthy (R-Calif.) said the GOP “will continue to fight to find information because we have a responsibility to our constituents, and we will not be denied that.”