‘We’ve Got Your Back,’ Trump tells Evangelical and Catholic Leaders 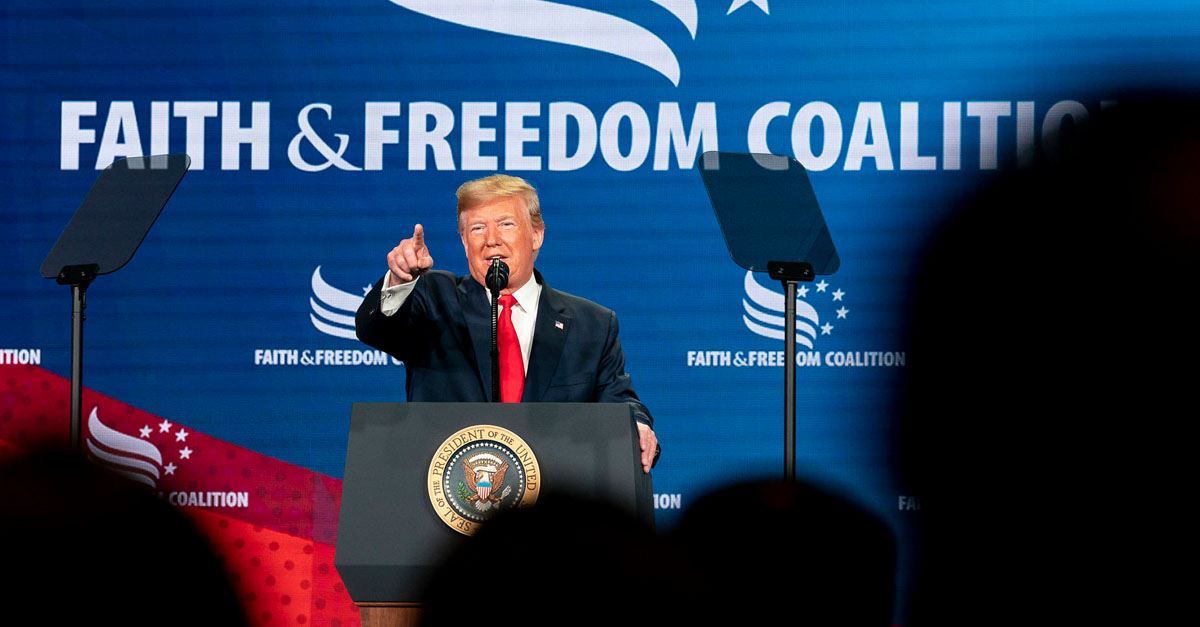 ‘We’ve Got Your Back,’ Trump tells Evangelical and Catholic Leaders

President Trump thanked evangelicals and Catholics for their support and touted his pro-life and religious liberty record Wednesday during a speech to the Faith and Freedom Coalition, a gathering of Christian conservative leaders.

“We’ve got your back --- got your back,” he told them. “You came out like no movement in history. There’s never been a movement like happened in 2016. … We’re winning the fight.”

Founded by Ralph Reed, the Faith and Freedom Coalition is a non-profit organization that promotes conservative and traditional principles, including the sanctity of life, family and marriage, according to its website. Reed has called it a “21st century version of the Christian Coalition.”

“We know that faith and prayer, not federal regulation, defines the moral character of our country,” Trump said. “... We know that families and churches, not government officials, know best how to create strong and loving communities. That’s why I want our pastors and our clergy telling us what they think. I want to hear from them. … Above all else, we know this: In America, we don’t worship government -- we worship God.”

“We are protecting the conscience rights of doctors, and nurses, and teachers, and groups like the Little Sisters of the Poor,” Trump said. “We’re with them.”

Little Sisters of the Poor is a Catholic institute that went to court to prevent the the Obama administration from forcing it to cover contraceptives and abortion-causing drugs in its health care plans.

“We’re preserving our country’s vital tradition of faith-based adoption,” Trump said. “And we are proudly defending the sanctity of life. But keep fighting because, as most of the people in the room know, it’s very fragile.”

Democratic politicians, Trump said, “have become increasingly hostile to pro-life Americans” who “want to help more children find a loving home and share their dreams with the world.”

“When he talked about wrapping the child and then discussing with the mother whether or not she wants to keep [it] …. that becomes an execution,” Trump said. “Every child born and unborn is made in the holy image of God, and that is why I have asked Congress to prohibit the late-term abortion of babies.”

Trump also referenced the new rule by the Department of Health and Human Services that would strip much of the funding from Planned Parenthood.

Trump urged Christian leaders to remain energized for the 2020 race.

“This could all change very quickly,” he said. “Just remember: We’ve done things that nobody thought possible. ... The wrong person in office -- in this office, right here -- can change it very quickly.”

Gallup: 60 Percent Want Abortion Illegal in All or Most Circumstances -- Highest in 8 Years